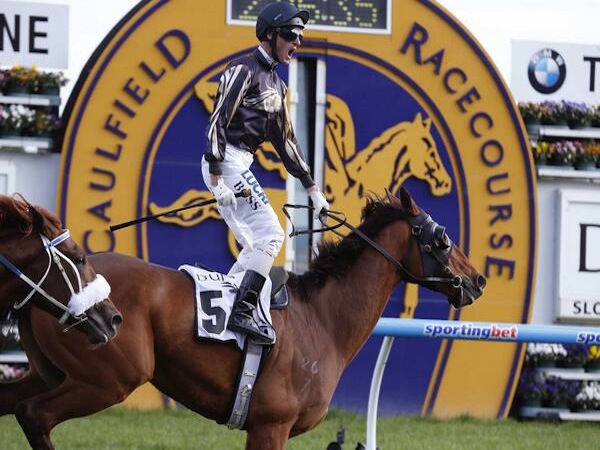 The Spring Racing Carnival is in full swing again as Melbourne comes alive with all the colour, fashion, and of course the racing that the next three weeks has to offer.

The Caulfield Cup carnival launched last Saturday, with the feature being the Caulfield Guineas that was won superbly by favourite Long John.

Trainer Peter Snowden and jockey Kerrin McEvoy made it a week to remember on Wednesday as the Darley duo teamed up to guide long odds-on favourite and star filly, Guelph, to a well-deserved victory in the Thousand Guineas.

The pair won’t be able to make it a triple treat with Snowden not having a runner in the 2400 meter handicap. McEvoy will pilot Gai Waterhouse trained Julienas.

Let’s take a look at some of the key runners for Saturday’s Caulfield Cup with upstart’s definitive preview.

The most interesting runner in the field. The British trained horse will be having his first Australian start and has star jockey Craig Williams on board who will be riding for a Caulfield Cup hat-trick. Racing away from home is nothing new for Dandino who has raced in the UK, Germany, Hong Kong, Japan, Canada and the USA where he was a last start winner of the 2700m USA St Ledger. Has drawn the car park, but will improve to barrier 16 after the scratching of emergencies, and with Williams on board a top ten finish is possible.

Being just second up from a spell is the main concern for the only Hayes runner in the field. Damien Oliver picks up the ride before his 12-meeting suspension for carless riding commences. Has won three of four starts second up, but even Hayes himself admits the horse may be a bit underdone coming into such a tough handicap race. Before its run in the Turnbull Stakes two weeks ago, it had won both Australian starts and looked ultra impressive. Don’t discount.

One of four runners for master trainer Chris Waller, who has taken all before him in Sydney over the past 18 months, setting a new training record for wins last season. Although he may not be as fancied as stablemates Hawkspur and Royal Descent, Moriarty has a big chance on Saturday. He was an impressive winner of the Brisbane Cup back in June over 2400 metres and was a close and luckless fifth last start in the Group 1 Metropolitan in Sydney. It is a get back horse so the wide gate shouldn’t be too much of a concern, and you know jockey ‘Froggy’ Newitt will deliver a peach of a ride.

12 months on and Jim Cassidy will pilot the favourite for the Caulfield Cup. Last year the pumper was aboard Glencadam Gold who lead turning into the straight before folding badly and finishing 15th.  This year he is riding a much better credentialed favourite. Hawkspur was just awesome over the Brisbane winter carnival winning three races on the trot including the Group 1 Queensland Derby. Again he showed all his class when tearaway winner of the Group 2 Chelmsford Stakes. Two runs since has been unplaced but was held up the whole straight at Flemington in the Turnbull. Barrier is the only concern, but he deserves to be favourite and will be right in the finish.

Bossy has won almost every major race in Australia bar the Caulfield Cup. He will have a good as chance as any to break his duck aboard New Zealand mare, Silent Achiever. The 11-6-6 doesn’t read well in the form guide, but her runs have been better than that suggests and trainer, Roger James has been bullish about his chances throughout and has been set for this race for two years. Has a well-placed barrier and a gun jockey and will be finishing in the top five. My top pick for the race.

Another Waller-trained star who is second favourite for the race behind stable mate Hawkspur. A big lead on the horse is jockey Nash Rawiller riding at 54kg as he usually rides at a heavier weight. Her last run in the Turnbull was quite plain and only battled home for 11th but her form before that has been super. Her one run at the distance was a win in the Group 1 ATC Oaks at Randwick in April where she won by a staggering ten lengths. Admittedly the depth of that race wasn’t very strong for a Group 1 but with the dominance of the victory, Waller has set the mare for a tilt at the Caulfield Cup and with rock hard fitness on her side, she’s another who should be right in the finish.

Ryan Lepore is a third year Bachelor of Journalism (Sport) student at La Trobe University, and a staff writer for upstart. You can follow him on Twitter: @ryanlepore