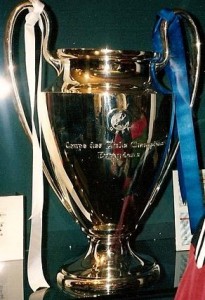 UEFA Champions League Trophy: By my own picture (Øyvind Vik) via Wikimedia Commons

Early Sunday morning Bayern Munich will be trying to become the first side since Inter Milan (1965) to win the Champions League final on home soil.

The Germans will be looking to win their fifth trophy and erase the disappointment of losing the 2010 final. Whereas Chelsea, on the other hand, will be looking to follow up from their recent FA Cup glory and get two titles out of their season. Which, let’s be honest, looked seemingly impossible in March before Roberto Di Matteo took over.

Now Di Matteo has an opportunity to really make his mark as a coach by delivering Roman Abramovich his (and Chelsea’s) maiden Champions League title.

If both teams were at full strength, audiences could have been in for a treat, but with numerous suspensions in semi-finals, expect to see goals from defensive blunders rather than brilliant play.

Chelsea head in as underdogs, but with the performance Bayern Munich put on last week against Borussia Dortmund, which saw them lose 5-2 in the DFB-Pokal final, the game will be closer than expected. With no cup silverware or league title to brag about, coach Jupp Heynckes will be praying that they can get over the line.

With Chelsea finishing sixth in the Premier League, they have added incentive they must win the final to gain qualification in next years Champions League campaign.

Road to the Final:

The players in this contest that will have the biggest impact on the result are not the most talented players on the pitch and not the players usually referred to as match winners.

Due to the seven suspensions, that may somewhat put a cloud over the quality of the match, both teams will have to take different approaches, especially defensively.

UEFA Champions League Trophy: By my own picture (Øyvind Vik) via Wikimedia Commons

Chelsea will be without captain John Terry, Ramires, Branislav Ivanovic and Raul Meireles, leaving their defense a little vulnerable. Automatic central defender replacements David Luiz and Gary Cahill, are both under injury clouds but are expected to be fit for the final.

But, without their captain and first choice right back, Chelsea will be forced to play two defenders who haven’t started in a competitive match in about a month.

This looms as ominous for the Blues, as Mario Gomez will be putting these players under immense pressure and with 12 goals in 11 matches during this campaign he must be stopped.

Bayern on the other hand are without Holger Badstuber, Luiz Gustavo and David Alaba, which gives them structural issues both in defense and in the midfield.

The loss of Badstuber who has been Bayern’s best defender this season leaves a gaping hole in their central defence. His replacement is tipped to be either Daniel Van Buyten or Anatoliy Tymoshchuk, neither of which can do Badstuber’s role in the side any justice.

Thus leaving more pressure on the shoulders of Jerome Boateng and Frank Ribery to cover the dangerous Didier Drogba, who much like Gomez, must be stopped. Drogba is known to be an influential figure in big game situations, like he showed in the FA Cup final when he netted a chance early in the second half.

The loss of Luis Gustavo does hamper the teams’ balance and ultimately their brand of football. Gustavo does the hard yards for Bayern and as a result his role in the side allows Bastian Schweinsteiger or Toni Kroos to play more freely in attack.

But now with Gustavo absent from the side, Schweinsteiger and Kroos may have to partner up in central defensive midfield, a partnership which may be rather questionable. The pair were tried out against Borussia Dortmund and failed miserably.

The winner of this game will be the side who can fill the spots of their suspended starters more adequately.

In 2005-06 these two sides met in a Champions League quarterfinal tie. The first leg saw Chelsea triumph 4-2 at Stamford Bridge, before a spirited Bayern side scored two late goals in the second leg to win 3-2. Unfortunately, for them it was too little too late as Chelsea advanced.

With all the suspensions it is hard to say which teams game plan will be affected more by the exclusions. Chelsea now have holes in their defence, as does Bayern, but Bayern also has to shuffle their midfield around a touch, whereas Chelsea doesn’t.

But, with the home field advantage, and probably a more talented list of players it is hard to see Chelsea overcoming the Germans. Their best bet would be to attack from the start and hope that they score first, then defend like hell.

I guess we will have to wait and see, but expect a close one.

What’s your prediction? Tell us below!

Jake D’Amato is a third year Bachelor of Journalism student at La Trobe, and is part of the upstart editorial team. Follow him on Twitter @jdamato32