The latest instalment of La Trobe University’s Bold Thinking series discussed the threats of gambling and drugs to the integrity of sport, writes Jarrad Gardner and Thomas Odell. 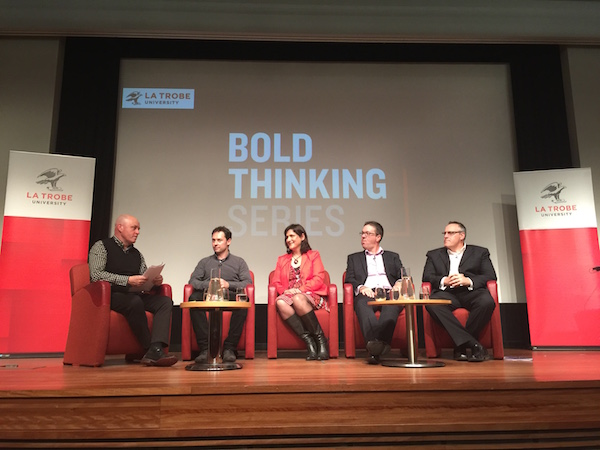 The panel discussed the question of whether gambling, more specifically match-fixing, or drugs posed a greater threat to the integrity of sport.

Marsh cited his experience as CEO of the Australian Cricketers Association in saying that match fixing is the most dangerous element of corruption in sport.

“I’ve had players in my cricket days report integrity issues to me directly, so I know it exists in cricket and other sports, so in my view this is the biggest threat to the integrity of sport,” he said.

“Match fixing I think is the biggest issue.”

The panel agreed that the global nature of gambling and match fixing makes it a bigger issue than doping.

The presence of offshore match-fixing syndicates provides the biggest risk to semi-professional sport in Australia, where most of what Hoye described as “insidious behaviour” takes place.

McKenzie referred to the example of the Southern Stars, a local soccer team in Melbourne fixing the outcome of their matches for an offshore betting syndicate run by Malaysian man Wilson Raj Peramul.

“They [police] tapped the phones, they observed the players and they caught them on the phone through a middle man and sometimes directly to this guy Peramul,” he said.

“They were making poultry amounts of money for effecting the outcomes of games [and] there was betting happening on markets across Asia on these Melbourne games.

“Sure enough the cops had enough evidence, they arrested these guys, they were put before our courts, and they all got a slap on the wrist and sent home with their tail between their legs.

“Which shows the deterrent isn’t that great.”

The gap between punishments for athletes who match-fix and athletes who dope is severe, Ordway pointed out an example of an athlete who was banned for two years after testing positive for Carboxy-THC, the active agent in marijuana.

The panel also discussed the serious threat of drugs in sport.

Leach referenced the recent scandal surrounding the banning of Russian athletes from competing at the 2016 Rio Olympic Games.

“The IOC feels it can’t blanch Russia because the consequences for them down the track … so they don’t want to ruin those relationships or be exposed for that,” he said.

Ordway suggested the reason for this boils down to the necessity to maintain relationships with nations that can host large-scale events.

“You look at how expensive it is to host an Olympic Games, and there are a limited number of countries around the world that can do that,” she said.

“Russia is one of those that has hosted the games recently, has the World Cup coming up, so they want to keep in sweet with those countries that have the capacity to do it, otherwise they’re going to run out of contenders.”

The panel agreed that athlete empowerment would play a major role in stamping out match fixing and doping in sport, with Marsh calling for more co-operation between players and authorities.

“WADA have shunned the athlete associations at every step, they don’t want to consult with us, they certainly don’t want to agree with us on how policies should look, so the athletes are disenfranchised, they don’t trust the authority, and I think that’s part of the reason we’re in the mess we are,” he said.

“I think we have to do more to empower the athletes. The athletes are the ones that have got the most to lose if a fellow athlete is cheating. You put it in a team sport context, if one of my teammates is throwing games or throwing parts of games then I don’t want him on my team, and athletes know.”

‘Young athletes don’t have the strength of character to go up against the club doctor.’ –@catherineordway #boldltu pic.twitter.com/UgJwd5vN57

The full discussion, as well as previous instalments of the Bold Thinking series can be found here.

Jarrad Gardner is a second year Bachelor of Media and Communication (Sport Journalism) student at La Trobe University. You can follow him on Twitter @JarradGardner

Thomas Odell is a second year Bachelor of Journalism (Sport) student at La Trobe University. You can follow him on Twitter: @tomodell18.