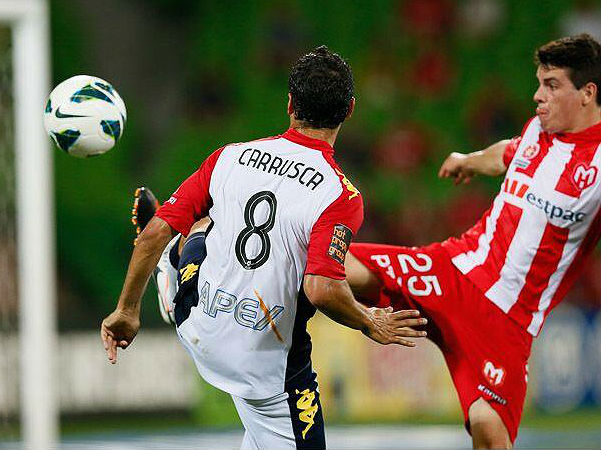 Melbourne Heart produced their worst performance of the season on Monday night in a disappointing 2-0 loss to fourth placed Adelaide United. Adelaide has all but assured themselves of a top four finish, whilst Heart sits ninth and risk missing out on finals once again.

A strange squad selection that included the omission of Jonaton Germano and Patrick Gerhadt left Heart supporters scratching their heads. John Aloisi said that Germano and Gerhadt’s omission had been a precautionary measure after the side’s difficult schedule, hinting at their immediate inclusion in next week’s vital clash with top of the table Western Sydney Wanderers.

The controversial penalty given against Jeremy Walker for a high foot on Marcelo Carrusca appeared to spell the end for the Heart. Heads dropped and fatigue set in. After the second goal scored by Ian Ramsey and brilliant team play, Aloisi brought on Eli Babalj and Golgol Merbrahtu – but the game was already over.

The Reds were dominating possession, mounting countless attacks on the Heart goal.

Melbourne Heart has not won a single game after conceding the first goal this entire season. Last night it appeared that Heart had given up immediately after Dario Vidosic converted the penalty. Speaking at last night’s post-match press conference, Aloisi admitted Heart’s form is alarming after conceding goals.

‘We haven’t won coming from behind yet this season. When things are going well we’re probably one of the best teams to watch. When we went a goal down, heads dropped too easily. That was disappointing because that’s happened quite a few times this year.’

With only three games left and six teams vying for the last two finals positions, the omission of Germano and Gerhadt  should not have happened.

Aloisi’s decision to rest Heart’s most important week to week players is shocking. To add to Aloisi’s surprising squad choices, captain Fred has recently been used as a substitute, which has further angered Heart fans. Fred was arguably the Heart’s best player last night and fresh legs should grant him a spot in the starting XI next week.

Incredibly, Melbourne Heart remains the A-League’s best first-half team and therefore would be topping the table if games finished at the interval. Heart’s inability to remain focused for a full 90-minutes, along with Aloisi’s alterations throughout a game, have hindered their performances this season.

Another large concern for Melbourne Heart is their inability to win on the road. Heart has not won a game this entire season away from home and if they are to make finals, this is something they will need to overcome immediately. Heart’s eight league wins have all come at AAMI Park, aside from one at Etihad Stadium in round one against Melbourne Victory.

Aloisi has admitted his side faces an uphill battle to qualify for finals.

‘We have been winning at home on a consistent basis, but we’ve made it hard for ourselves by not picking up points away from home… We won’t give up… We’ve still got a chance of making the six and we just have to believe that we can and pick up points.’

With Melbourne Heart’s final home game of the season coming up against Wanderers this Saturday, they will need to ensure they take all three points against the league leaders to stay in touch with a chance at the top six. Aloisi’s tenure as Heart’s coach could yet depend on whether or not they qualify for the 2012/13 A-league finals campaign.

It is too late to sack Aloisi this campaign.

A new manager with a few weeks to go is the last thing both fans and players want. However, if the Heart do miss out on finals action, after having once been touted as possible champions, Aloisi would have failed to meet expectations. Perhaps that could serve as the catalyst for a parting of the ways at the conclusion of the 2012/13 season.

Grant Roberts is a third year Bachelor of Journalism student at La Trobe University. You can follow him on twitter @GBRRD4L.