Hannah Matchett explains how Australians and the US vote. 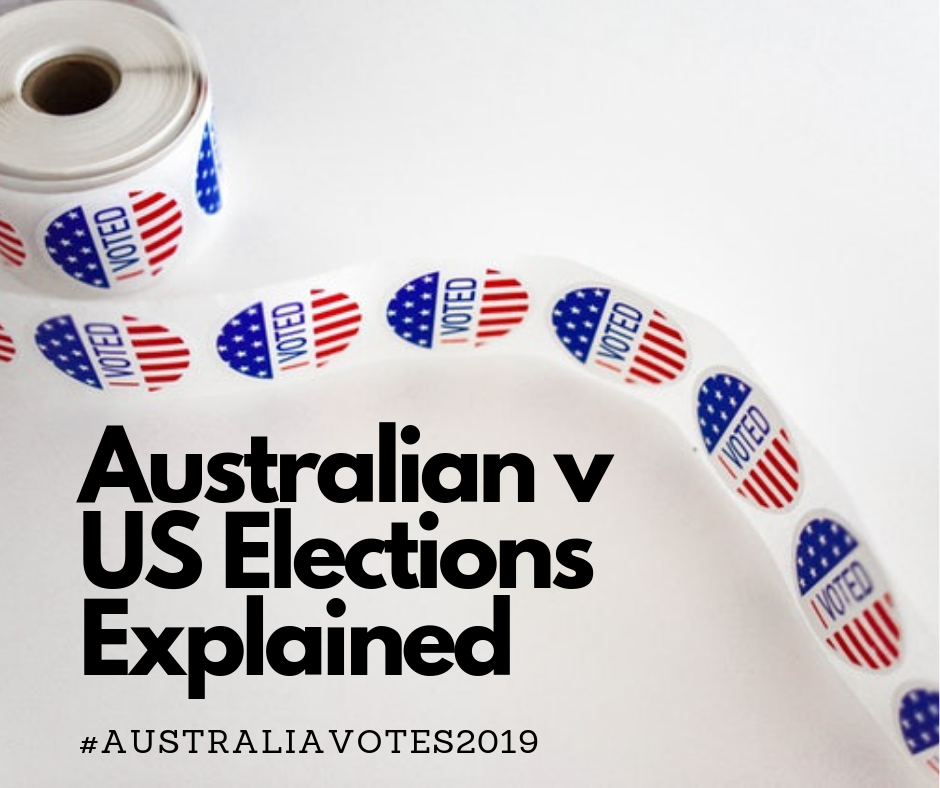 Just last week I had the rug ripped out from beneath my feet when I was abruptly informed that we do not actually vote for the person who runs our country.

How has it taken the total 22 years of my life to realise this, you ask?

Well, the entirety of my political knowledge is derived from an excessive consumption of US-based television and movies.

As one Gen Z voter among thousands, I like to believe I’m not alone in my ill-founded assumptions about Australian politics.

Shows such as Designated Survivor, House of Cards and even The Simpsons paint a picture of a political landscape that is quite different to our own.

With the 2019 Federal Election well underway, now seems like as good a time as any to learn some important distinctions between the Australian and US electoral processes.

Part 1: Who are you voting for?

Let’s start with the fact that you do not choose a prime minister.

This one stumped me, mostly because I’m dead certain that every ballot paper I’ve faced has asked me to place a preference number in a box next to a candidate’s name.

So, after an absurd amount of confusion and rifling through 37 co-existing internet tabs, I’ve managed to find some answers.

For the purpose of the federal election, we’ll just focus on the House of Representatives, as this is the house of parliament that forms our government.

The House of Representatives is made up of 150 seats. The party that holds majority of these seats [at least 76] after an election becomes the ruling party.

The leader of this party then becomes Australia’s prime minister.

It’s important to note that it is the members of each party, and not Australian citizens, who are responsible for selecting their leader.

So, while we may vote a party into power, we don’t actually have any say in who earns the badge of Prime Minister.

When you go to the polls on 18 May, you are essentially choosing which party you would like to be in charge.

Depending on your local area, a.k.a your electorate, your ballot paper will have a list of different parties and the names of your local Member of Parliament (MP) for each party.

Those names on the paper are not candidates for a Prime Minister but rather seats in the House of Representatives that you are voting to fill.

You could be forgiven for thinking otherwise.

Thanks to our media saturation of US politics, we’ve had presidential campaigns shoved down our throats.

In most US presidential elections there are two main parties; the Democrats and the Republicans, similar to Australia’s Liberal and Labor parties.

Each party will choose a particular candidate to run for them, who citizens will then vote for.

When Americans take to the voting booths, they are casting their vote for the person they want to be president, and cast separate votes for their upper and lower house representatives for Congress [their word for parliament].

Although the Democrats and the Republicans are responsible for picking a nominee to run for their party in a presidential election, they don’t have the same control over their president as Australian politicians do over their leader.

This is because Congress is a separate branch of government to the executive branch, where the president sits.

Australia has no separate executive branch. Instead we have a Governor-General, chosen by the prime minister and appointed by the Queen, who oversees parliament.

Fortunately for the US president, their party cannot decide to boot them out of office when they get sick of his or her dwindling poll numbers.

The only way a president will lose his position is if he loses an election or is impeached.

A quick flip through the history books puts the difference between Australia and the US’s political stability into perspective.

Australia has no maximum period of service for a Prime Minister, unlike the US president who can only serve a maximum of two four-year terms.

Despite this, Australia has torn through five prime ministers in just 10 years, due to their political parties cutting them loose and replacing them with a new leader.

On the other hand, a US president has never been removed from office for any reason other than losing an election.

Soon after securing his position as prime minister by booting Malcolm Turnbull out, Scott Morrison introduced legislation to make it harder for political parties to sub out their leader for a new one.

In future, if a party wants to ditch their sitting prime minister, it will take a two-thirds majority of the party to vote yes, compared to the 45 to 40 majority that allowed ScoMo to swoop in to become Australia’s latest PM.

In the next instalments of our Australian-American political comparisons, we’ll attempt to understand how a winner is chosen, and why we have to vote when our American counterparts do not.