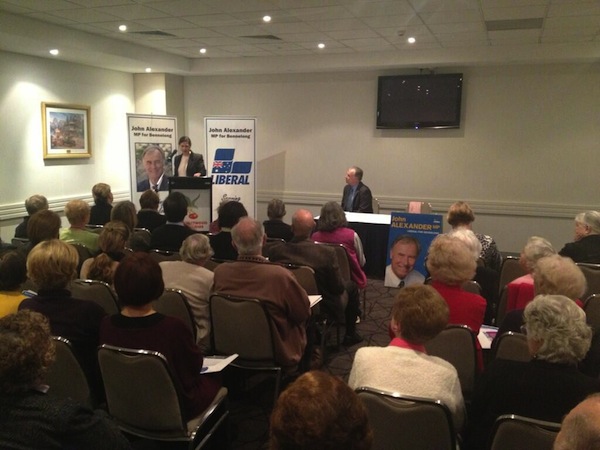 When it comes to politicians, Australian society has always held a contemptuous perception of its leaders. All too often the view of politicians in this country is of robotic individuals who, although fiercely tough, are excessively narcissistic and gifted in the art of spin.

But perhaps the most firmly engrained characteristic of any political leader in the Australian psyche is that no matter who you are or what you’ve achieved in life, if you’re a politician you’re dishonest.

It is not all that difficult to see why this vulgar perception has been allowed to manifest so deeply into the minds of the Australian populace.

The once charismatic statesmanship and decisive reasoning of the past has now been replaced by an era of crude personal attacks and internal squabbling.

So it may come as a surprise that in amongst the shameful backroom antics and leadership spills, genuine politicians can still be found. New South Wales Liberal Senator Concetta Fierravanti-Wells, or Connie as she is affectionately known, is one of these rare politicians.

It sounds too good to be true, but there is something that separates Connie from the rest. Perhaps it is the fact that Connie has always tried to keep herself grounded through a strong appreciation for her community.

Growing up in Wollongong as the daughter of Italian migrants, Connie’s 25 years of community work has ranged from simply helping her mother to translate for other migrants at weekend community events, to becoming the assistant secretary for the Marco Polo Association and a founding member of the Unanderra Nursing Home for elderly migrants at the age of just 23.

Since then, Connie has not looked back. Now 53, she remains unfazed by her achievements, instead choosing to see it as a value so deeply entrenched in her personality since childhood.

“I had a very good upbringing,” said Connie. “I was brought up to assist my community so I learned the strength and importance of community at a very young age; it was about giving back.”

Given Senator Fierravanti-Well’s rich history of community experience and her humble approach, it does seem rather odd that someone with such a highly regarded reputation would want to risk tarnishing her excellent community rapport in the nasty world of politics.

However, according to Connie, it makes no difference. She views politics as merely an extension of the last 25 years of community service and that makes her an ideal candidate for politics.

“When I became a senator I was really shifting my focus from servicing one direction of the community to servicing another direction,” she said. “So for me, becoming a senator was simply a transition for something that I had effectively done for years prior!”

Given that Senate committees often enquire into different aspects of the community, Connie’s long history of on the ground experience provides her with an invaluable advantage over many of her peers – namely, a greater ability to relate to the issues affecting her constituents.

While it may be true that community experience can help a politician do their job better, Senator Fierravanti-Wells is quick to point out that it can also work wonders for the public perception of politicians.

“It just completely changes people’s perception of you as they see me as someone who actually understands what they have gone through and that is invaluable in politics, because you just can’t substitute for experience,” she said.

Since entering the Senate in 2005, Connie’s community experience has been key to dismantling the often ironclad “politician-constituent barrier”.

That being said, Connie is by no means unwilling to get her hands dirty in the nitty gritty of politics.

Despite the uncertain future of the upcoming election, Connie has stopped just short of an all out assault on Labor in the mental health and ageing sphere.

“We are not taking anything for granted,” she stresses. “It is really important that we look towards some proper reform, not the sort of reform that Labor is undertaking.”

Connie is one of a raft of critics to condemn Labor’s lack of funding for the mental health sector. She has often thrown criticism the Prime Minister’s way and her concern is not unwarranted with the government having only spent $580 million out of a promised $2.2 billion on mental health.

“They are basically robbing Peter to pay Paul,” said Connie. “It’s just not being rolled out in important areas such as suicide prevention and we will work hard to stress that to stakeholders in Mental Health.”

Whatever the future holds for Senator Fierravanti-Wells, be it government or opposition, she remains certain of one thing, “My love for my community is too entrenched for the nasties of politics to break.”

Tom Colwell is a Bachelor of Laws and Bachelor of Media student at La Trobe University. He can be found on Twitter: @TomColwell2