13th January 2010. An earthquake has just rocked Haiti. I wait for the news and analysis that follows such random events, but not on this occasion. Instead, the ABC’s entertainer/presenter is filling the airwaves with drivel, calling on her listeners to ring in with their stories of disaster. As to the earthquake in Haiti and the plight of the Haitians, I am left in the dark.

Strangely enough, community radio tells the story. The presenter says that ‘Haiti is a nation where the buildings are so poorly built they crumble in the wake of mother nature.’ He explains that the Haitians are the poorest people in the Americas, having suffered centuries of colonisation, dispossession, genocide, and slavery. I’m listening to volunteer programmer Dr. Ralph Newmark, who, as well as being the director of the Latin American Studies program at La Trobe University, presents 3CR’s Latin American Update program.

This backgrounder to the most important world news of the week isn’t being heard on the public broadcaster, but on a community radio station – just one of the many non-profit stations that cater for Australia’s diverse audience.

‘What I really love about this station is that there is plenty of time to tell a story. You don’t have to get the story told in five minutes,’ explained Libby Jamieson, the manager of Community Radio 3CR.  The radio station is on Smith Street in Fitzroy, a bustling inner suburban shopping strip – once a refuge for homeless Aboriginals and back street drug deals. While the ‘wayward’ have been moved on, the radical radio station created by Melbourne’s ‘Labor left’ remains.

‘The people who set this place up in the 1970s were determined that it would be independent and could never be attacked from outside and taken away,’ says the forty- something manager. She began her career at 3CR presenting Dykes on Mics, a weekly magazine-style program for lesbians, and now heads a small paid staff of seven women.

The place is a large two – storey building, an old warehouse that has recently scored a facelift including a stunning mural attentively created by local artists. Yellow and red stripes now coat the towering walls – on top of which a spear-throwing figure of a hunter-gatherer is drawn. The inclusion of the Aboriginal is deliberate – 3CR was established to provide a voice for those denied access to mass media, such as the indigenous community. Programs such as Fire First and The Koori Survival Show continue to agitate for indigenous rights, following in the footsteps of the radical activist Gary Foley.  Foley once programmed in the guise of the Cosmic Avenger, and called Aboriginal public servants ‘rotten little traitors’ and deserters to the cause. 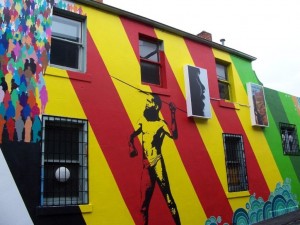 It is ‘no-frills’ radio, freezing in winter and boiling in summer – the headphones are long past their prime and the microphones might squeak and droop, but the words and their intent are loud and clear: ‘Keep a smile on your dial while you’re smashing the State’, says Joe Toscano, his mouth pressed up close to the microphone, daring his listeners to become active. Dressed in a loud floral shirt, with his long grey hair tied up at the back, the radical anarchist is presenting his analysis of local, national and international news that he says ‘is not heard anywhere else’. He’s a medical doctor, radicalised as a student in Bjelke Petersen’s repressive northern state. This week he’s urging his listeners to attend a rally at the State Library: ‘It’s time for a new “people’s bank”’, he says – arguing that the big four banks are ‘predatory’.

I ask Jamieson if she regards 3CR as radical radio. ‘I’m not sure about that,’ she says. ‘I think that 3CR is described by some people as being radical but I really believe that this has come about because it often takes the oppositional stance in regard to the mainstream media.’

In Radical Media: The Political Experience of Alternative Communication John Downing suggests that the advantage that radical radio has over mainstream media is its freedom from political controls. Jamieson points out that there is no advertising at 3CR and that’s the way they like it. ‘We own this building and we have made deliberate choices so that we can remain independent and not have to rely on advertising.’

Downing says a further advantage of alternative radical media is their small – scale nature. However he says that those involved in radical media always want to have their ideas more widely projected. But can these ideas be incorporated in the mainstream? And what happens when those involved try?

In 1999, Joseph Toscano hosted a weekly session on local ABC radio in the early hours of the morning. His co-host was the National Party Senator, Julian McGauran. ‘Within three months of going to air it was pulled off by ABC management because they were concerned about the impact it would actually have on politicians,’ scoffed Toscano. ‘Personally, I think the sooner they privatize the ABC the better,’ he added.

Every week around four million Australians tune into community radio. Professor of journalism at Griffith University, Michael Meadows has found that listeners wanted more than ‘mindless chat and stupid jokes’ and chose community radio because of its ‘mix of music and discussion and conversation’. Jamieson says that 3CR’s strength is conversation radio with a range of political viewpoints.

I’m told that Community Radio 3CR began broadcasting in 1976 and that its creation was a reaction to the conservative politics of the time, established by people who wanted to create a media that told stories that they didn’t read or see or hear in the mainstream media. ‘In the early days the labor left were very dominant here and ideologies such as anarchism were viewed with deep distrust – but the station has moved along and the various forms of anarchic politics are largely discussed now on 3CR,’ said Jamieson. ‘We are reflective of grassroots organizations – 3CR listeners are all sorts of people with all kinds of beliefs.’

Whether 3CR can be called radical or simply alternative is unclear but it must be said that its dogged determination to exist without commercial funding is radically different from the norm. The station’s running costs for last financial year were approximately $670,000 with most of its income coming from subscriptions and donations. ‘Staffing is our biggest expense and we run a very tight ship. 3CR has to make a small amount of money go a long way – but then I think that poor people are the best budgeters in the world,’ says Jamieson. ‘Although there is some government funding we maintain our independence.’

The station manager is justifiably proud of ‘Melbourne’s radio of dissent’ and says that it continues to survive because it’s a very good idea, and it’s necessary.

Helen Lobato is a journalism student at La Trobe University.