New rules and interpretations on concussion have caused major confusion. 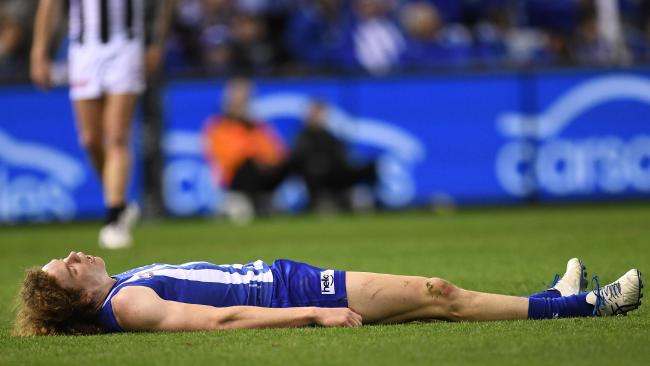 The public outcry that has emerged from many contentious suspensions in the AFL this season has been momentous.

People will conceive the AFL is heading in the wrong direction and the game is changing too rapidly, not for its own good.

This follows after two players, Patrick Dangerfield (Geelong) and Brodie Grundy (Collingwood), were suspended for tackles – now deemed illegal – which left their opponents concussed during the 2017 season.

People believe the new strictness in MRP sanctions is ruining the toughness of the sport, while others are pleased that the AFL are cracking down on head impacts and related injuries.

Professor John Olver, Director of the concussion clinic at Epworth Hospital, is optimistic that the AFL are taking the right steps when it comes to working around concussion and managing head injuries.

“I think the main positives coming from the increased attention on concussion in sport and the possible long-term effects from multiple concussions is that there have been rule changes to minimise the risk to the head in tackling,” Olver tells upstart.

“There have been stricter protocols put in place to remove patients from the game until the issues relating to their concussive injury have resolved,” he says.

The AFL currently has a head injury assessment test for when players come off the field with concussion symptoms. This gives club doctors the authority to rule a player out for the remainder of the match.

Something that will be looked at by the AFL is not only whether players should be ejected from a match due to concussion, but whether they should also automatically miss the next round of footy.

“Most protocols to get players back to the game involve a graded introduction of increasingly vigorous exercise and contest, always making certain that post-common symptoms don’t return with contact,” says Olver.

“In 80-90 per cent of people, symptoms will resolve completely within two weeks.”

The Grundy tackle – which left North Melbourne spearhead Ben Brown with a suspected broken neck – was even deemed “perfect” by Nathan Buckley.

The Collingwood coach’s opinion in the post-game press conference in Round 20 was a shared one throughout the AFL world.

Brown was admitted to hospital and cleared of any serious damage, with the club allowing him to play the following week.

That’s what emphasises the divide in opinions about concussion in the AFL.

Australian journalist and SEN radio broadcaster, Rohan Connolly, tells upstart that with the new laws surrounding how a player can or can’t tackle, comes confusion among the current crop of AFL players.

“Grundy actually won a free kick for that [tackle] but was suspended, which is a contradiction in itself,” says Connolly.

“But earlier in that same game, there was an incident where Jack Ziebell was penalised for a dangerous tackle but he wasn’t suspended … yet at the same time a guy wins a free kick for a tackle for which he was subsequently suspended for.”

“I think that’s pretty reasonable evidence that it has the potential to confuse players.”

But the issue remains, what exactly is the AFL doing to rectify the confusion surrounding what’s legal and what’s not, and is what they’re doing effective?

Herald Sun football journalist Jon Ralph declared the game would be in “crisis” if dangerous tackles putting players in hospital were acceptable.

While the Grundy tackle, which received a two-week suspension, was not maliciously intended, the outcome was still severe.

Accident or otherwise, the outcome could have been much worse and the AFL’s level of precaution on head injuries is clear.

Many across social media believe it’s the beginning of the end for the AFL, with players getting suspended for things they may not have just five or 10 years ago.

Wow what a disgrace! Brodie Grundy gets a free kick for holding the ball and gets suspended for 2 weeks #mrp #afl

Though the AFL this season put focus on player welfare, and protecting a player’s head.

The 26-year-old was advised by doctors to retire from the game, after he was concussed in his only senior game for the year in Round 8.

While at just 22 years of age, former Lion Justin Clarke was forced to retire in 2016 as concussion symptoms lingered and plagued his short career.

This is why the AFL will continue to penalise players for putting the welfare of an opponent at risk with forceful tackles, while the players themselves will need to adjust their techniques accordingly.

But Connolly, who spent 30 years at The Age newspaper, believes this new way the MRP are ruling on these types of incidents can be a risky thing for the game.

“There’s been more and more weight attached to consequences of an action rather than the intent, which I think is a bit dangerous,” he tells upstart.

“In a collision sport, it’s quite possible to have no malicious intent, and yet by quirk of circumstance or gravity, the guy is suffering consequences.

“I’ve seen plenty of occasions where someone has really set out to fix someone up and it doesn’t have that impact, and yet their intent was worse than the first bloke.”

Due to the way the game is played now, it’s a positive thing that the AFL are investing more time into dealing with concussion.

And it’s timely with the evolution of the sport.

“The game has changed now. It’s more of an athletic sport. It’s a faster game, players are stronger and it’s fair to say impacts from collisions are heavier,” says Connolly.

“It seems like the more studies that are done on concussion the greater the pool of knowledge about it. There’s definitely an attempt to clean up the game.

“They’ve taken on a greater sense of urgency with the rise of women’s football as well.”

There will always be a subjective range of opinions with people from the AFL public, who have experienced different levels of football in different eras, questioning the application of new rules and interpretations.

But from what we’ve seen and what we know now, particularly with the high dangers in American football, the AFL has taken a step in the right direction with the goal of ensuring professional players remain functional once their careers have ended.

A player getting suspended for a dangerous tackle is not softening a tough and physical game, but rather, improving it.

Connolly explains why more tackles now are leaving players concussed compared to two decades ago, while also suggesting that an umpire’s interpretation of prior opportunity – which was another hot topic this season – could have an impact.

“I felt like this season perhaps tackles weren’t being rewarded enough,” says Connolly.

“The only thing you can do with a tackle if you won’t be rewarded with a free kick is actually hurt a player.

“If you have a look at how many stoppages there are now compared to 20 years ago and how many tackles are applied now …  there’s going to be more tackles which means more opportunities for players to be concussed.”

Connolly insists that a larger number of tackles that go rewarded could aid the situation, but noted this would be a “cyclical thing” due to umpiring inconsistencies.

Several AFL players have put an end to their career since the turn of the millennium due to ongoing concussion or other head-related injuries.

If former St Kilda player Justin Koschitzke fainting on live television isn’t convincing enough, then nothing will be.

Concussion has been a major problem for sport across the globe, and now, there are concerns that these head injuries – which are prominent in other sports – are growing in Aussie Rules.

Protecting the head of a player is an initiative that will see the AFL grow into a safer code, which is suitable for both sexes.

Jarryd Barca is a third-year Media and Communications (Sport Journalism) student at La Trobe University. You can follow him on Twitter @j96barca.