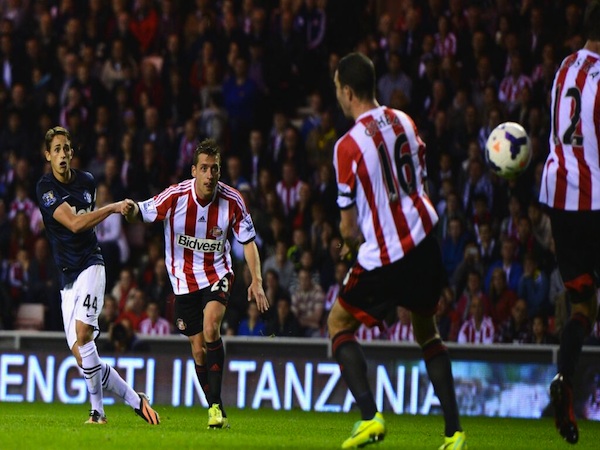 He’s the Manchester United teenager whose name, although difficult to pronounce, is on everyone’s lips.

At the tender age of 18, Adnan Januzaj’s pulled off a heroic performance to score twice in his first league start for Manchester United, to help David Moyes’s struggling side overcome the bottom-of-the-table Sunderland at the Stadium of Light last Saturday night.

After the match, the under-pressure Moyes was unsurprisingly thorough in praising his new teenage prodigy.

However, days after his first goals in Premier League football, his name is still on the back pages of national newspapers in the UK, as debate rages over where the 18-year-old will take his highly-rated talents on the international stage.

Born in Belgium to Kosovar-Albanian parents, who hold a Serbian passport, and the grandchild of Turkish citizens, Januzaj is an extremely curious case for international football authorities. That was even before England decided to get involved.

Moyes, in amongst his praise of Januzaj, also revealed that the English FA had contacted his agent regarding where his international future lies.

“I think there is some way that he could qualify for England,” Moyes said. “I think he’s got a choice of countries to play for. He’s probably got three or four different countries that he could choose.”

Roy Hodgson, speaking later in the evening on BBC’s Match of the Day program, confirmed England had approached his representatives.

“There’s no doubt that he’s a real talent and we have our eyes on him,” the England manager said, “but a lot will have to be discussed”.

“He’s been with United for a long period of time and, of course, that discussion will have to be seriously debated before we have to start naturalising players.

PHOTO Adnan Januzaj volleys in his second #BPL goal to give Man Utd a 2-1 lead at the Stadium of Light #SUNMUN pic.twitter.com/2Gfl3jj3m0

Under FIFA rules, a player can become a ‘homegrown product’ and therefore become naturalised if s/he has lived continuously in a specific country for “five years after reaching the age of 18”.

Yet the discussion is heating up over whether England’s reported attempts to poach the teenager are ethical.

It’s a valid question and a grey area that FIFA should define before the foundations of international football are effectively defeated.

The three countries debating over where Januzaj’s international future lies should be Belgium, the birthplace of the player, Kosovo, which was recently declared an independent football association and is the birthplace of his parents, and Albania.

Turkey, the birthplace of his grandparents, and Serbia and Croatia, which remain locked in a battle with FIFA regarding Kosovo’s highly disputed status as an independent football authority, may not even warrant qualification into this argument.

England, certainly does not.

A distinction is needed between Januzaj’s case and West Bromwich Albion’s Saido Berahino, another young, highly rated forward making his mark on the Premier League.

Berahino was recently capped at Under 21s level by England, despite being born in the African nation of Burundi. However, his circumstances are completely different.

Berahino and his family moved to England after being granted political asylum from the war-torn Burundi at the age of 10. He didn’t move purely for footballing reasons, unlike Januzaj. The 20-year-old therefore must be included in a list of exceptions, defined by FIFA, for players moving country strictly due to non-footballing reasons.

At the moment, a clearly defined FIFA-approved list of such exceptions does not exist. Although it has to in order to stop countries, like England, poaching foreign players from a young age.

Having the power to choose which country to represent, based purely on that country’s ability as a footballing nation, effectively ruins the concept of international football.

It’s also a moral and ethical dilemma that both FIFA and the English FA could frankly do without.

Riley Beveridge is a second-year Bachelor of Journalism (Sport) student at La Trobe University. You can follow him on Twitter at @rileybev.