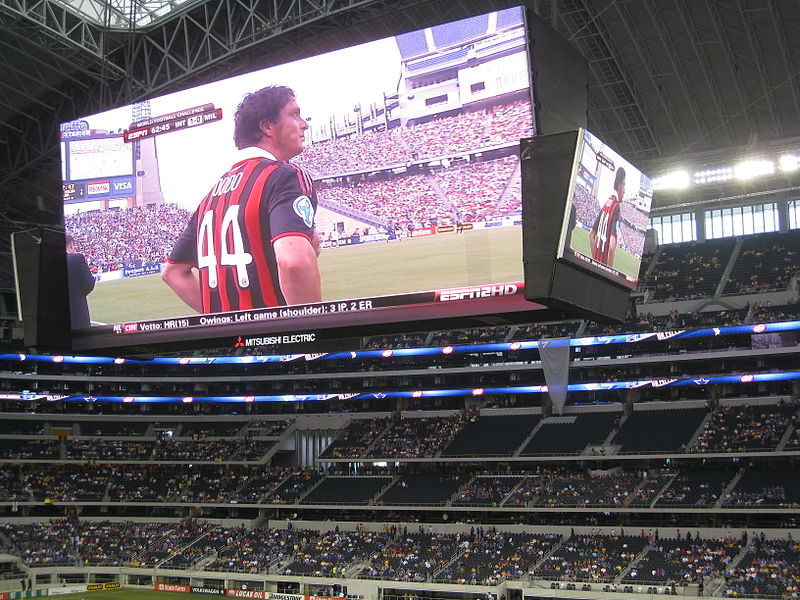 Home field advantage in the NFL is almost priceless – for the right team.

With the help of fans, chaos and noise levels of around 112 decibels can often pressure the opposition offense into making mistakes, or causing any number of penalties though the sheer lack of being able to hear the instructions being called.

Ignoring crowd noise for just a minute, what about history and culture?

How would a team feel walking into a century-old stadium with a knack of being a barren, loud and an intimidating place to play?

So what happens when you have a purpose built, 80,000-seat stadium for one of the better known and well supported teams in the NFL? One should not be wrong to expect that for opposing teams it would be loud, menacing and hell to play in, especially against a team which really should be performing well.

Unfortunately for Dallas, the case of Cowboys Stadium is a curious one.

Built for the team by billionaire owner Jerry Jones, the stadium was completed in 2009, after the ageing Texas Stadium was deemed too old and had a limited seating capacity of just over 65,000 people.

The home opener had the New York Giants defeat the Cowboys 33-31 in front of 105,000 people, meaning that 25,000 fans crammed into the ‘Party Pass’ standing area. By all assumptions, even a staple crowd of around 80,000 should have the joint rocking.

Unfortunately for the Cowboys, the stadium is becoming renowned for being rather quiet, and not at all one of the tougher assignments in the NFL. The Cowboys have played three home games, the first two average out to just over 86,000 attendees.  But somehow, the place fails to muster more than a constant drone. Opposing teams can should out instructions just as easily as the Cowboys do.

What’s rather worrying is that the Cowboys recently sent out an email to their season ticket holders urging them to get involved after last home game, a Monday night encounter with the Bears, where Chicago fans in their minority were louder than Cowboys fans.

‘When you see the video graphic playing on the video board, get on your feet and get LOUD! Together, we can make opposing teams dread coming to Cowboys Stadium,’ the email says. It isn’t a hard graphic to miss.

‘If we all play our part, we can help give our Dallas Cowboys a true home-field advantage.’

When a team has to issue a plea to its supporters, something is definitely a-miss. Is it a design flaw that blocks or averts acoustics? Is it sheer laziness of the fans?

The Cowboys now hold a 14-13 record at the stadium, just over .500, which is well below where they should be with such a team, and such a stadium. The Giants, on the other hand, are undefeated from four outings.

The danger of relocating, or building a stadium is that you lose any home field advantage that you had with the old one. It’s not only opposition teams that have never played there, the home team needs to adjust as well. It’s as good as an away field to begin with.

From 2009 until before the start of this season, the Packers were 21-3 at Lambeau Field- where they have played since 1957. In the winter, it freezes and has acquired the nickname ‘Frozen Tundra’.

The Patriots were 23-1 at Gillette Stadium before this year, but that field has only been open a dozen years. But they made it their own, they won Super Bowls out of that stadium.

But when you make as much noise as a Boeing 747 as the Seahawks 12th man does, or if you come into a history steeped frozen wasteland like in Green Bay, it’s going to be hard to win.

When you have a technologically brilliant, visually impressive and expensive entertainment complex instead of a noise fortress, it’s less intimidating, and therefore a lot easier to win. The notoriety Dallas fans have for not being the most vocal in the competition doesn’t help either.

When Jerry Jones built the stadium, in true billionaire style, he catered for 300 private suites- more than any other stadium in the NFL. One question must be asked: Do these people, or the people on the bottom level with their champagne and caviar even get involved on a third down?

Jones may have been thinking about the fact the ‘everything is bigger in Texas’ and forgotten about what an NFL stadium, and an NFL crowd is supposed to be. When you pack the ‘Average Joe’ (often the most vocal supporters) into the end-zone standing room, most of the noise they make would float outside.

Who cares about the big 2,100 inch HDTV screen? Who cares that it’s higher than the Statue of Liberty and longer than the Empire State building is tall? And why is it more than 30 kilometres out of Dallas?

It just seems that it was an apparent cash grab and a statement to the world about how big Jerry Jones is in Dallas. That doesn’t translate to wins. Any competent General Manager should know this.

When you build an entertainment complex from scratch, and don’t create the air and culture of it being a fortress from the first day, then divisional rivals that have to play there up to twice a year are going to find it a lot easier to win- especially if they bring a decent contingent of travelling fans.

The saying goes that ‘everything is bigger in Texas’, just maybe not the home field advantage.

Matt Walsh is a first year Bachelor of Journalism (Sport) student at La Trobe University. You can follow him on Twitter: @MattWalshMedia

This piece was first published on From the Sideline.