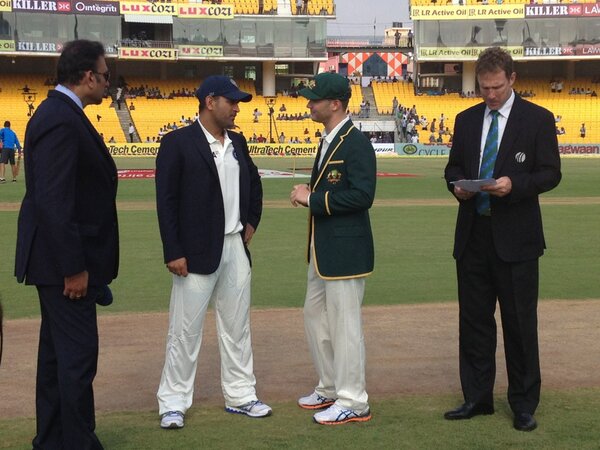 Does anybody truly care about Australia’s upcoming tour of India?

I love cricket. I appreciate the subtleties of the sport, its sub-plots, the one-on-one battles and the tense vibe of a close contest between bat and ball – but pointless limited overs tournaments, like the looming one in India, need to cease.

The upcoming seven-match series is an absurd scheduling mess for a number of reasons.

First and foremost, Australia was in India just five months ago for the Border-Gavaskar Trophy, a Test series steeped in modern significance which provided a valuable learning curve for Michael Clarke’s men.

But to fixture another mini-tour to the country just a few short months later is nothing short of ridiculous.

Secondly, the upcoming series is awkwardly wedged between back-to-back Ashes series. Not only does playing one-day cricket on the subcontinent fatigue those players who play both formats (admittedly there are only a handful), but you also couldn’t find conditions more different from those that Australia will encounter at the Gabba on November 21.

Yes, Australia’s cricketers will have two-and-a-half weeks to adjust to the red ball and the quicker decks in Australia after they return, but regardless, this one-day series is a huge step backwards for a team that is attempting to win back The Ashes after three consecutive defeats.

For too long Cricket Australia has flirted with fixtures.

Given the significance of this upcoming Australian summer, good preparation should surely have come before anything else.

This is especially pertinent given Australia’s fast bowling injury crisis that has engulfed the national team since the retirement of Glenn McGrath in 2007. While adjusting from one format to another is a mental challenge for batsmen, the constant back-and-forth nature of international and domestic competitions puts undue physical stress on Australia’s raft of fast bowlers.

It’s no coincidence that the most durable of them all, Peter Siddle, elected to only play Test Cricket at an international level. While this approach in isolation seems more physically arduous than drifting between the shorter versions, the Victorian has actually prospered due to his considered preparation and unwillingness to float between the three formats as other players have.

Young bowlers like James Pattinson, Patrick Cummins, Josh Hazlewood and Mitchell Starc have all been in and out of rehab during their entire careers. However, all four are swapping and changing between four-over days, 10-over days and 25-over days. Only a handful of international bowlers in the world can condition their bodies for this varied workload, yet it is exactly what the Australian selectors are asking each of their bowlers to do.

Michael Clarke and MS Dhoni are out in the middle #INDvAUS pic.twitter.com/G1WGZjI2xG

Despite the draining nature of what promises to be another bland one-day series with more prods to long-on than blades of grass, Australia’s coach Darren Lehmann – who ironically has been rested for the upcoming tour – must be commended for his positivity. He is refusing to rotate players after the recent gruelling English summer where the Aussies didn’t win a single Test, but regained a semblance of respect with a hard-fought one-day series victory, which ended 2-1.

When asked whether he is open to resting players, Lehmann indicated that, although he is just one of five selectors, it’s his preference to win every match with a fully prepared Australian XI.

“We’ll be trying to pick the best team we can each and every time,” he said at a press conference earlier this week.

“From our point of view we are out to win every game we play and we achieved that result of winning the series.”

But selecting the best 11 players may not be as simple as it sounds, with Michael Clarke’s troublesome back proving to be a constant headache for Lehmann, given his importance to the Australian setup as both captain and talismanic batsman.

He is the only current Australian batsman to average above 50 in Test cricket, a far cry from the batting order of the 2002/03 Ashes, when Justin Langer’s average of 46 was the lowest out of Australia’s top seven.

This brings us back to the scheduling stuff-up. The likes of Johnson, Haddin, Hughes, Watson and Clarke himself would be best served preparing themselves for red ball cricket under the Australian sun, not white ball cricket in the Indian mist.

Tom Morris is a third-year Bachelor of Journalism (Sport) student at La Trobe University, a football writer at St Kilda FC, and a staff writer for upstart. You can follow him on Twitter: @tommorris32