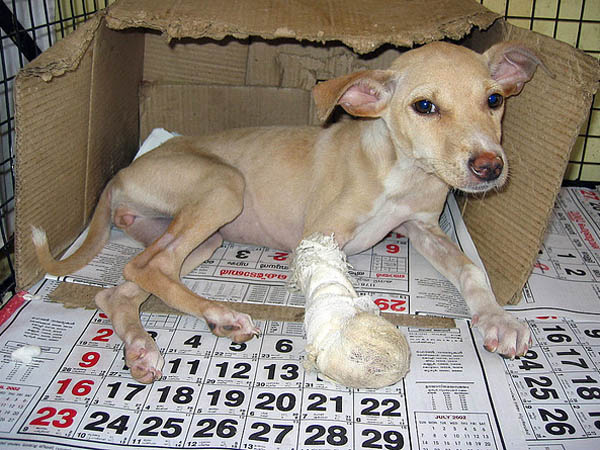 When it comes to violence against animals, it seems that the punishment rarely fits the crime.

In recent weeks there have been multiple cases of animals being tortured or killed in cowardly acts that appear to span right across Australia.

In the last week, a Staffordshire terrier’s throat was slashed in NSW, while in Melbourne a boxer was shot five times in a drive-by shooting, and in Western Australia a cat was set on fire.

While the latter of the two perpetrators have not yet been found, the Staffordshire terrier’s attacker will be facing court this week, in a crime described by Chief Animal Welfare League Inspector Damien Thiele as “one of the worst cases of cruelty we have seen to date.”

However, considering the Australian courts’ history of sentencing in animal cruelty cases, the chance of the accused receiving a deserving punishment is unlikely.

Last week a man from Seymour appeared in court with charges of aggravated animal cruelty and damaging property.

The accused chased his friend’s mastiff in a drunken rage armed with a steel bar, he then cornered the dog in the backyard and struck it on the head and body and proceeded to string it from a tree. He later threw the deceased dogs body over a fence.

According to the Herald Sun, he was noted in court for showing no regret for his actions.

A report by psychiatrist Dr Lester Walton said that the defendant’s lack of emotion and remorse was not attributable to a mental illness.

Despite this, the man received a mere three month jail term.

Sadly, this is actually a tough sentence compared to past cases.

Serious acts of aggravated animal cruelty are consistently punished with apparently soft penalties, despite evidence to suggests the danger these criminals pose to the public.

While the maximum sentence against aggravated animal cruelty in Australia is actually rather high – between two and five years jail, depending on state – this is almost never exercised.

It is extremely rare for a custodial sentence to be handed down at all in cases of animal cruelty.

Last year in Wodonga, a kangaroo had a rope tied around its neck and was dragged by a car for two kilometres in Wodonga, before the animal was dumped in the centre of town. The accused received no jail time.

In another case from 2012 that outraged animal activists, a man from Hobart stood trial for decapitating two kittens with his bare hands. He received a three month suspended sentence and community service.

What is particularly concerning is the danger these unpunished or under-penalised criminals, with such extreme levels of aggression, pose to public safety.

The link between animal cruelty and violence against people is nothing new. Debra Boland from Animal Aid has had firsthand experience in her shelter dealing with abused animals.

“Anyone who is capable of harming an animal should be considered as potentially dangerous,” she says. “Inflicting violence on innocent creatures should never be overlooked as a personality flaw, it is a red flag that shouldn’t be ignored.”

Additionally, Monash University psychologist Eleonora Gullone’s research has found that those who cause harm to animals “are likely to have pathological or psychopathic leanings and dangerous tendencies”.

With these warning signals in mind, should serious cases be served with tougher penalties then three months?

According to La Trobe University Law School’s Libby Brenton, three months out of a maximum of two years in Victoria is actually considered a relatively severe sentence in legal terms.

“It sounds lenient in that context” she says, adding “3 months of the 2 years maximum, even though it sounds lenient, was probably quite difficult to be passed.”

Furthermore, Queensland firm, Brisbane Lawyers Educating & Advocating for Tougher Sentences (BLEATS) have said as part of the Proposed Amendments to Animal Cruelty Penalties that the main issue with these court rulings is that it is past cases are used as a precedent.

“Much of the problem [lies] in precedent law – that is, the Magistrates must look at previous sentences as a guide when sentencing offenders. As the prior sentences handed down were low, a vicious cycle [has] developed,” says a BLEATS representative.

Because of this, the courts do not appear to be getting any closer to more punitive sentences being handed out in these cases.

Brenton adds that because of precedent, making any significant increases to animal cruelty penalties is almost impossible to pass through the court of law.

“Although judges can change precedent, they’re very reluctant to, unless there was a radical change in one of the cases,” she says. “Usually something disastrous has to happen for the law to change.”

Until then, it appears to be a waiting game before justice is reached for the lives of these animals.