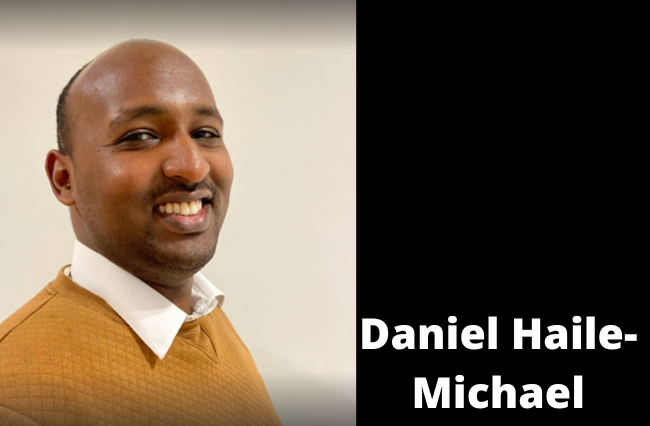 More than 404,540 people play basketball in Victoria, making it one of the most popular sports state-wide. It’s not uncommon to see people young and old, from different cultural backgrounds, united to shoot hoops and run around the courts on any given day.

But, for 15-year-old Daniel Haile-Michael, the harmless activity of shooting hoops with his friends in the Flemington housing commissions raised frequent alarms for the local police who patrolled the area.

“Playing basketball and hanging out in groups in that area, being very visible and loud … some members of the community felt threatened by that,” Haile-Michael tells upstart.

“What ended up happening was because there were some people in the community who were committing crimes, the local police started using heavy-handed tactics in terms of targeting young African Australians.”

Born in Sudan in 1990, Haile-Michael moved to Melbourne with his great uncle when he was only five, where he would grow up in government funded housing in Melbourne’s inner suburbs.

Being an African growing up in  Australia was really hard for Haile-Michael, but his biggest lesson was that the police, the people who are supposed to protect and serve the community, were the ones causing the challenges for him.

Haile-Michael was first racially profiled by police when he was 15.

“It took me quite a while to know that’s what was happening. I was a bit naive to be honest, I didn’t really understand or appreciate what was going on,” he says.

“I just felt like that might have been one police officer, but as time went by, I noticed all my friends were being picked on and harassed by the same people and even when the police officers changed their attitude, that behaviour sort of continued.”

At the time, Haile-Michael didn’t fully understand why the police constantly stopped him and interfered with his day, but he eventually grasped that the reason he was being stopped had nothing to do with what he was doing, but everything to do with the colour of his skin.

He tried his best to ignore it and carry on with his life, but the constant harassment by the police kept occurring, sometimes three or four times a day.

“That was a very interesting and scary period of my life. Constantly being stopped and questioned, even though by a certain stage, the police officers knew us all by name because they’d see us everyday.”

It came to a point where Haile-Michael had had enough of the police disruptions in his daily life, so he decided he was going to make a change. He co-wrote a report called The more things change, the more they stay the same, with his friend Maki Issa which highlighted the amount of racial profiling occurring “across Melbourne”.

“The motivating factor [to write the report] was the sense of injustice, and also the fear that this would impact future generations as well,” he says.

“This is not fair, this is not right, and if there is anything we can do about it, we should definitely be doing something about it.”

His goal was to bring attention to what was occurring, in hope that change would transpire so future generations wouldn’t have to go through similar experiences.

“Obviously what’s happened to us has already happened, we can’t really do anything about that, but we have got to try and change it so that society changes and people don’t get treated that way just because of their socio-economic background,” he says.

The pair used the report to take Victoria Police to court, where they would reach a settlement. From that day forward, the police had to look into how they treated scenarios involving ethnic groups and update their manual to define racial profiling as “making policing decisions that are not based on objective or reasonable justification, but on stereotypical assumptions about race, colour, language, ethnicity, ancestry or religion”.

“There has been a significant amount of change that has occurred within the institution itself, the priority communities division was created as a result, that in itself is sort of established now. Police are starting to change the way they operate and thinking about consulting with communities while also seeking a lot of feedback,” he says.

Because of the report, Victoria Police also completed a significant amount of internal cultural awareness training and have since actively encouraged people of ethnic backgrounds to join the force.

“All these initiatives are positive things that are occurring as a result of that [the report], and I think also the community has created a lot of awareness about racialised policing, and that in itself, has challenged people who have that belief or stereotype,” he says.

For all his work, Haile-Michael was recognised as the most inspiring African Australian by Africa Media Australia in 2013. In 2014, he received the Young People’s Human Rights Medal from The Australian Human Rights Commission.

“That [winning the awards] was really motivating and inspiring, it really pushed us to do more, having that recognition really inspires you. It also means other young people see that and see that it’s worthwhile doing,” he says.

The now 32-year-old has graduated University with an engineering degree which he’s used to “design and deliver great infrastructure projects for rural communities”, while also taking part in the Community Voices initiative to share his experiences with the media.

Haile-Michael has since become a human rights advocate and was once the chair of the Tigran Community Association in Melbourne, where he aimed to raise awareness about the genocide occurring in Tigray.

What started as a 15-year-old trying to peacefully play basketball with his friends, changed the course of Haile-Michael’s life. Now, it’s his mission to ensure that other minority groups go through the same experiences he did.

Story: Thomas Dev is a third-year Bachelor of Media and Communications (Sport Journalism) student at La Trobe University. You can follow him on twitter @Devdev10007