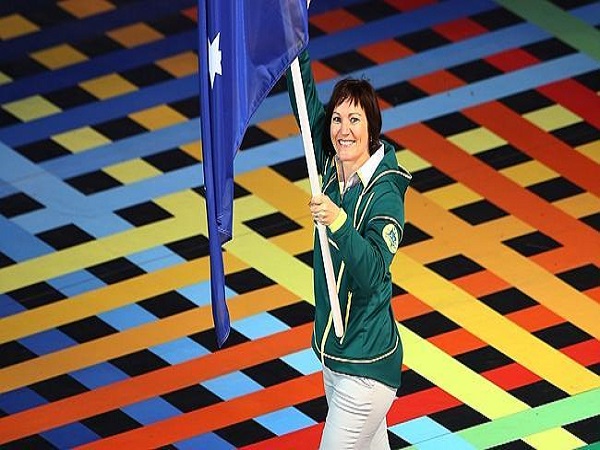 Flag-bearer, Anna Meares powered to a third Commonwealth 500m time trial title this morning, confirming her stature as one of Australia’s most decorated cyclists.

In the freestyle relay, Bronte Campbell, Mel Schlanger, Emma McKeon and Cate Campbell were ahead of the world record at every change but it was Cate’s lightning quick final leg that saw Australia break the previous record in (3:30.98) and erase one of the last ‘super-suit’ times from the history books. The former record, held by the Netherlands, was set in the 2009 final world championship meet before FINA banned high tech plastic suits for assisting performance.

The relay win was McKeon’s second gold for the night, having earlier taken out the women’s 200m freestyle, edging out England’s Siobhan O’Connor by 0.25 seconds, and Bronte Barrett collected bronze from an outside lane. McKeon was not the only swimmer from her family to be a first day medallist after her brother, David, scored silver in the men’s 400m freestyle.

Another world record in the pool went to 16 year old Rowan Crothers in the men’s S9 100m freestyle, breaking the time he set at selection trials. Having already blown Australia’s most decorated paralympian Matthew Cowdrey out of the water, Crothers admitted after the race that he was unsure how much faster he could swim.

In her win at the velodrome the smooth-operator, Meares, was faultless in a Commonwealth record time of 33.435 seconds, finishing well clear of the earlier time posted by teammate Stephanie Morton. It is Meares’ third victory in the event and the fourth consecutive win for the Meares family after Kerrie won the title in 2002.

When told that her roommate, sprint prodigy Morton, had secured silver behind her Meares was ecstatic, cheering and shouting from across the holding area.

“I saw Steph go down the straight in blur of green and gold and I had absolutely no idea where she had placed. To get that information was really nice,” she said.

Morton was equally proud of her effort and said it fulfilled a dream.

Fittingly, Australia’s flag bearer from Thursday morning’s opening ceremony was the athlete to chalk up the country’s first gold of the games. Within an hour, Australia had another.

The Australian men’s team took out the 4km pursuit in a remarkable display that crushed the English team led by Bradley Wiggins.

Despite losing Luke Davison at the halfway mark, the Australian trio of Jack Bobridge, Alex Edmondson and Glenn O’Shea built upon a lead of over two seconds, destroying their opponents (3:54.851). Wiggins, the 2012 winner of the Tour de France, was unable to lift his team to the Australians’ cadence and the English succumbed to the current world champions in the final straight, more than five seconds behind.

The first gold medal of the Games went to women’s triathlon winner, England’s Jodie Stimpson (1:58:56). Stimpson, the silver-medallist at last year’s world championships, surged from the lead group of five entering the final lap of the run. It was the beginning of the end for Australia’s Emma Jackson, who fell away to finish fifth, 38 seconds adrift. Emma Moffatt (2:01:31) and Ashleigh Gentle (2:03:24) crossed seventh and ninth respectively.

In the men’s triathlon, Alistair Brownlee broke clear of his brother Jonathan to win England’s second triathlon medal. Australians Ryan Bailie placed 5th (1:50:43), Aaron Royle 8th (1:51:03) and Dan Wilson 9th (1:51:36). None could match the Brownlees’ pace, finishing outside the medals. If they recover well, Bailie and Royale will join Jackson and Moffat tonight in the mixed team relay.

In the first netball match for pool B Australia, ranked world number one, breezed past ninth-ranked Wales, winning 63-36.

The Hockeyroos were similarly untroubled in their opening match of women’s hockey, defeating Malaysia 4-0.

In the squash tournament, five of the six Australians made it through their first matches with only Sarah Cardwell having her colours lowered. The Melbournian lost in straight games to Canadian 14th seed Samantha Cornett.

The first Australian medals in judo went to Amy Meyer and Chloe Rayner who both won their halves of the bronze medal heat in the women’s 48kg category.

Other medal performances for Australia were:

It’s been a massive first day here at #Glasgow2014! Here’s how the medal tally stands pic.twitter.com/LrjbkZRO7D