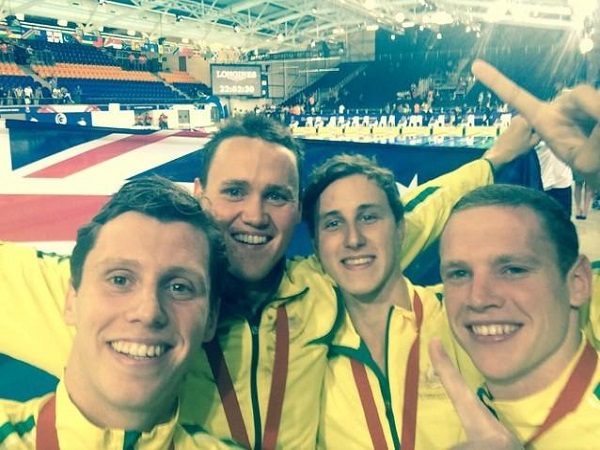 Athletics Australia needed a good start after the week’s controversies and Michael Shelley gave it the perfect start with gold in the men’s marathon.

Shelley put in a massive final eight kilometres as the lead pack fractured and crossed the line in two hours, 11 minutes and 15 seconds to capture the first gold of the athletics program. Kenyan Stephen Chemlany (2:11:58) who Shelley dropped in a surge four kilometres from the finish collected silver while Uganda’s Abraham Kiplimo (2:12.23) recovered from a fall at an early water station to take bronze.

It follows a week win which the national body was broadly criticised for its harsh punishment of Alex Rowe, Benn Harradine and team captain Sally Pearson when the trio arrived late at a training camp. News then broke that Pearson was no longer on speaking terms with high performance coach Simon Nathan.

“You just try to run the best you possibly can and it was a dream to be honest. I’m still buzzing, I can’t believe it,” said Shelley. “It probably wasn’t until a kilometre out that I got a bit of a feeling. I just kept pushing on. My main idea was to stay relaxed and I was always there in the lead group.”

Jess Trengove then backed up Shelly’s gold with another smart run to win bronze in the women’s marathon. Trengove’s time of 2:30:12 may have been almost three minutes off second place but it was 50 seconds under her previous best and notched up one of five PBs set by the Australian team of three men and three women.

So very proud of all our marathon team! Michael Shelley the next Aussie marathon champ! Jess great 3rd! & 5 pb’s incredible!

Australia’s fastest woman Melissa Breen ran well to win her heat of the women’s 100m in 11.54. Breen has a good chance of bettering her 2010 semi-final exit, starting tonight’s first semi-final (4:10am AEST) with the second fastest PB. Anneliese Rubie made a remarkable Commonwealth Games debut in the women’s 400m, qualifying eighth for tonight’s semi-finals with a lap of 52.86. On the final evening at the velodrome, Australia continued to dominate, medalling in four of five events. Anna Meares was upset by roommate Steph Morton as the 23-year-old apprentice led from the front and defeated the master sprinter in two straight races to capture gold in the women’s sprint. Points race world champion Amy Cure was unable to secure a medal in the women’s 25km points race despite taking a lap on the field. Cure needed a win in the final sprint to steal gold but could only manage fourth and finished just one point from bronze. Glen O’Shea took silver in the men’s scratch race. O’Shea was one of only four to take a lap on the field but lost out in the sprint with New Zealand’s Shane Archibold. Brandie O’Connor added another bronze for her efforts in the women’s 1000m B2 tandem time-trial. In the final event of the night, Matthew Glaetzer made a huge move down the back straight to win the men’s keirin. All three Australian riders qualified for the final but Shane Perkins and Peter Lewis were unable to position themselves into the medals following a tight sprint finish. Australia finished its fourth day at the velodrome with a total of 20 medals – seven gold, eight silver and five bronze – more than Canada has needed for fourth place on the medal tally. Above the flawed pool floor, Australia’s men continued to redeem themselves with another relay gold and a podium lockout in the 100m freestyle. A lightning fast final leg from Thomas Fraser-Holmes anchored Australia’s win in the men’s 4x200m freestyle. South Africa began the final leg ahead of Scotland but neither were a match for Fraser-Holmes who posted a 1:45.18 to share gold with Cameron McEvoy, David McKeon and Ned McKendry.

Alica Coutts was best of the rest in the 200m individual medley, finishing well behind eighteen-year-old English star Siobhan-Marie O’Connor, who recorded her fifth medal of the games.

Australia recorded top-two finishes in both the men’s 50m backstroke and the women’s 200m backstroke as Ben Treffers and Belinda Hocking triumphed over teammates Mitch Larkin and Emily Seebohm.

At Ibrox Stadium, a ground known better for the round ball game, Australia was unable to match their rugby sevens silver medal from 2010, losing to New Zealand in the semi-final 19-7. Australia thrashed Samoa in the match for bronze but was lucky to even be at that stage following a thrilling after-the-siren win over Wales in the quarter-final.

At the Glasgow National Hockey Arena, Jodie Kenny scored a hat-trick as the Hockeyroos dismantled the host team Scotland 9-0. Kenny’s first shot at goal, a top-corner pearler from a third minute penalty corner, quickly showed the gulf between the world cup finalists and the home team ranked 16th in the world.