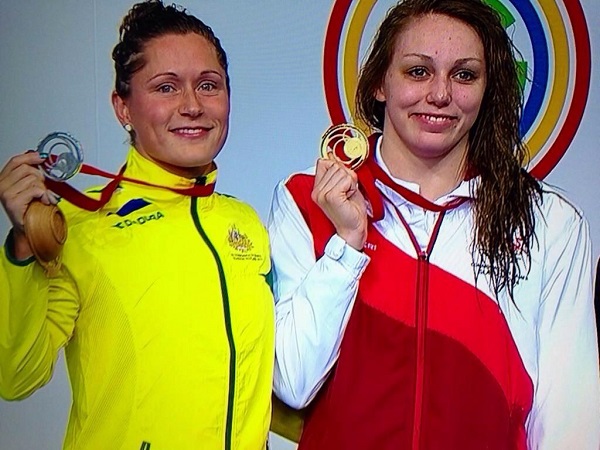 Cate Campbell led an Australian podium lock-out as she edged out her sister, Bronte, to win gold in the 100m freestyle in a record 52.68 seconds. Emma McKeon finished a comfortable third to ensure all places on the podium were filled by Australia.

Earlier, Matt Larkin became the first Australian to win the 200m backstroke at the Commonwealth Games since 1974, finishing half a body length ahead of teammate Josh Beaver. Larkin took the lead after the halfway mark and from there never gave it up, despite being challenged all the way by Beaver. Larkin’s training partner Matson Lawson collected bronze.

Injured breaststroker Christian Sprenger will not leave Glasgow empty-handed, securing a third place victory in the 50m event. Sprenger finished only one-hundredth of a second ahead of Scotsman Mark Tully to collect his only medal from Glasgow, having finished eighth in the 200m and failing to make the 100m final.

Lorna Tonks collected silver for her swim in the women’s 100m breaststroke, almost one second behind England’s Sophie Taylor.

So happy to have captured a silver medal for Australia in my first national Team-know I can get faster! #Glasgow2014 pic.twitter.com/aLBtuI1GID

Maddie Groves won the bronze medal in the 200m butterfly final after exhausted Canadian, Katerine Savard, fell from second place to last in the final fifty metres and finished more than five seconds from the lead.

The shooting team scored two more gold medals with wins in the men’s 50m prone air rifle and the women’s trap. 52-year-old Warren Potent qualified first and remained at the head of the field throughout the final, winning with a final shot of 10.3 for a total 204.3. In the clay shooting, Laetisha Scanlan hit 13 of 15 targets to edge out her Cypriot opponent by just one point in the gold medal match.

At the track, Melissa Breen could not replicate her Australian record of 11.11 when she needed it most, missing the 100m final by 0.11 seconds. Breen (11.45) finished fifth in her semi-final, the same result as 2010, and was unable to match the speed of the Jamaican winner Schillonie Calvert who posted 11.08 seconds.

In the field, 21-year-old Darren Birkinhead performed admirably in the final of the shot put. Birkinhead, whose PB of 19.69m is significantly lower than the automatic qualifier, was not expected to win, but a put of 19.59m placed him a respectable fifth and two metres behind gold medallist O’Dayne Richards.

Both the Kookaburras and Hockeyroos recorded clean sheets in their pool match wins and remain at the top of their groups. The Hockeyroos won their fourth match in five days with three first-half goals against Pool B opponents, England. Jodie Kenny scored two taking her tournament total to nine. Goalkeeper of June’s World Cup Tournament, Rachael Lynch, is yet to concede a goal, helping Australia to a goal difference of 25. The Kookaburras won their pool match against South Africa 6-0 topping Pool A of the men’s competition with two group matches remaining.

Australia yet again cruised past their opponents in their netball match, this time accounting for Trinidad and Tobago 69-34. Captain Laura Geitz ensured the Diamonds extended their winning streak that began last year to eight matches with nine rebounds and four intercepts. The Diamonds are unlikely to be moved from top spot in their group and will watch Wednesday’s New Zealand-Jamaica match closely, as the loser will play Australia in the semi-final stage.