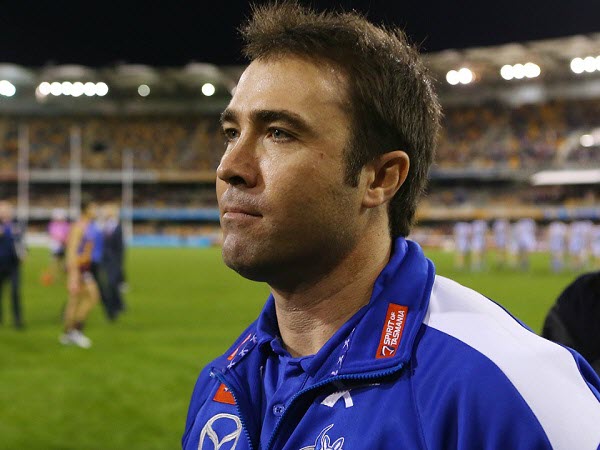 An inability to defend against the best is blocking the Kangaroos’ path to premiership success.

The “Shinboners” conceded 130 points to reigning premiers Hawthorn on Saturday night, in a performance not too dissimilar from last year’s preliminary final.

For Kangaroos supporters, references to the preliminary final will bring back painful memories of a rampaging Swans unit that piled on 136 points as it crushed North on the counter-attack.

Coach Brad Scott lamented the inability of his team to defend after the loss to the Hawks on Saturday night. He also confirmed that he tried little to remedy the situation.

“Sometimes you’re not going to score from every foray forward, but when you are getting punished going the other way by some really scintillating footy, that was disappointing,” Scott said.

Scott’s reluctance to tinker with his team’s offensive movement leaves the Kangaroos prone to being hurt on the rebound.

North leaked 140 points in a round one onslaught from a rampant Crows outfit, while the Port Adelaide Power managed to muster a score of 113 just two rounds later.

This means that the Kangaroos have conceded more than 110 points in three of their first five games this year, an indictment on Scott and the team given the low scoring nature of today’s football.

The ability of a team to stop the opposition’s conversion of rebound 50s into forward 50 entries is a reliable measure of a team’s ability to “run both ways” and adhere to defensive structures.

Not surprisingly, the two best teams of recent times feature at the top end of the rankings when it comes to defensive transition.

Sydney and Hawthorn currently sit third and fourth respectively, allowing opposition rebound 50s to enter inside 50 from defensive exits only 23 and 24 per cent of the time so far this year.

Collingwood, a team who set the benchmark for manic defensive intensity with its 2010 premiership win, has rediscovered the formula for success and sat atop the “transition table” after four rounds. The Pies’ opponents have only managed to move the ball from defence into attack with a success rate of 19.6 per cent.

In stark contrast, the Kangaroos place seventeenth and allow 34.2 per cent of rebound 50s to be taken the length of the ground.

North Melbourne aims to offset this transitional inadequacy by soaking up pressure inside its defensive arc. Once the ball entered North’s defensive 50 last season, the team was the third hardest to score against in the competition as they got numbers back in droves.

North also ensures that when it does attack, it does so with efficiency. On the rebound, the Roos transition the ball from defence to attack 32.7 per cent of the time, the fourth highest percentage in the league.

The age profile of North Melbourne’s list sends a clear signal that the time for a premiership is now. The average number of games played by a North Melbourne player is just over 90, which is a wealth of experience not found elsewhere in the competition. Based on current form, however, the team is far from where it needs to be.

Allowing the opposition to camp inside the attacking zone is fraught with danger when competing against the best who require only one small lapse in concentration to inflict damage.

Ultimately, the key for North Melbourne lies in its ability to stop the run-ons. Tightening up its transition defence could be the key to this conundrum.

David McPherson is currently in his first year of a Bachelor of Media and Communications (Sports Journalism) degree at La Trobe University. You can follow him on Twitter: @dpmcpherson10.