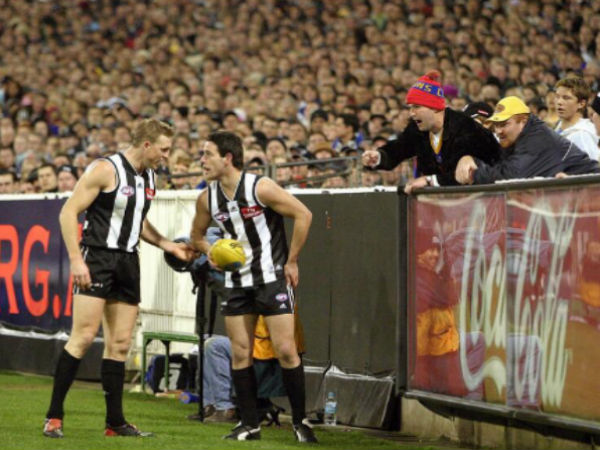 Alan Didak was so archetypically Collingwood that his mouthguard was black and white for much of his career. He never looked to just be playing the game – rather each of his 218 matches was a performance.

Some learn the game and flourish, but Didak was like a know-it-all sitting at the back of the class – not through arrogance, but sheer natural ability. What others trained for, he played for.

A Copeland Trophy winner, a two-time All-Australian and of course a premiership player, he was drafted at the beginning of the last decade and a flag hero by the end of it.

But all good things must come to an end. And for much of 2013, Didak’s time at Collingwood looked to be on thin ice.

Nathan Buckley, a former teammate, captain and current coach, rarely let the 30-year-old off his tight leash. If he did, it was often with the limiting proviso of a humbling green substitute vest – or against Melbourne.

Buckley’s decision to delist Didak is bold but justified. For the first time in his illustrious playing or coaching tenure, with the club, Buckley has chosen to somewhat alienate himself from the Collingwood fan base.

For Didak was much-loved. His style, perhaps more than his raw ability, resonated with fans more than any Collingwood player in recent history.

He was Dale Thomas without the Colgate grin and Eric Cantona without the bad-boy persona. In reality, he was somewhere in between – outrageously good but with a hint of rogue about him.

Against Port Adelaide, each one of Didak’s 10 disposals was greeted with a chorus of applause from the Collingwood faithful. The same fans that witnessed Didak’s smother that resulted in a premiership defining goal, in the 2010 Grand Final replay, and countless other unique moments.

But ultimately this crowd support re-affirms Buckley’s point. His interest in the nostalgic Malthouse era flashes has worn thin. No longer is Buckley satisfied with being Malthouse’s successor – he’s now committed to forging his own path and this decision makes the direction patently clear.

Like Buckley the player, the coach has refused to shirk the contest. His swiftness is commendable.

To that end, Didak doesn’t fit the bill. He’s 30, and he represents the old Collingwood.

This is not to say Didak is a finished product, although it is difficult to imagine someone so intricately black and white donning a rival guernsey in 2014. He played five games this year, a sure sign that his time was up, and teammates Jamie Elliot, Jarryd Blair, Ben Sinclair, Alex Fasolo, Andrew Krakouer and Sam Dwyer were all selected ahead of him at one stage or another.

Time is every vulnerable veteran’s worst enemy – closely followed by their coach. While Didak looks likely to play on, he will always remain a Collingwood player.

The one confusing decision was to replace Jamie Elliot last Saturday night with Didak in the third quarter – the future to the past, it seemed. But with the 24-point loss, Buckley looks to have done the opposite – throw away the past and look to the future.

It was a bold but necessary call.

“If we have any person or anyone or have any thoughts at all that we need to cling on to what we’ve had, well, then this is the last blow that lets that go and you need to keep evolving,” Buckley said on Saturday night.

Following the club’s 2011 Grand Final loss, Buckley had no choice but to cling on. The Grand Final team was hungry to make amends for its sobering loss to Geelong. But after 24 months in the job, and an elimination final defeat, he has a mandate to evolve the list.

Darren Jolly, Krakouer and Didak were all delisted, and more are expected to follow. Heath Shaw’s famous Collingwood name has been thrown up – pointedly so given Buckley’s assertion on the weekend that the values and principles may be askew at the Westpac Centre.

“You’ve got to ask if we’re making the right decisions in regard to culture and in regards to environment, personnel, game plan, coaching staff etc,” Buckley said.

Shaw is a name synonymous with the club’s proud brand, but the defender sings from a similar hymn sheet to that of Didak, and Dane Swan for that matter. Evidently, it’s high time for Collingwood’s next generation to create its own legacy.

And so questions have been, and will continue to be, asked internally. Football manager Geoff Walsh and fitness guru David Butterfant have departed, while Nick Maxwell should step aside as skipper, with Scott Pendlebury his natural replacement.

Change is afoot at Collingwood, and Buckley seems determined to create a new black and white culture. If that means ridding the club of heroes from yesteryear – no matter how iconic they are – then so be it.