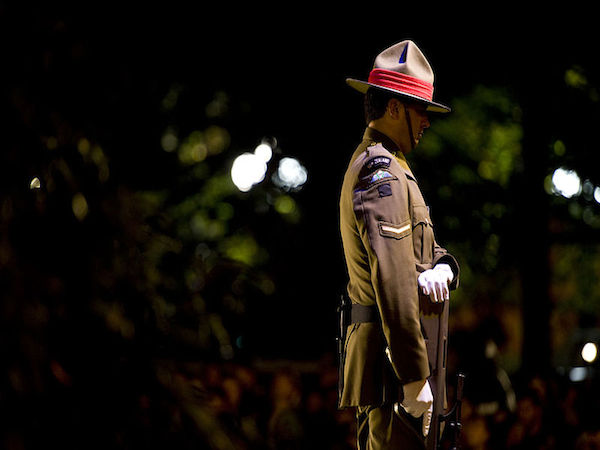 SBS sports presenter Scott McIntyre, who has covered two FIFA World Cups and four Asian Cups for the network, was sacked on the weekend.

His sacking followed a string of highly emotive and “disrespectful” tweets about Anzac Day, linking the Anzacs to murder, rape and theft, and suggesting that those who typically commemorate Anzac Day are “poorly read” drinkers and gamblers.

Wonder if the poorly-read, largely white, nationalist drinkers and gamblers pause today to consider the horror that all mankind suffered.

The cultification of an imperialist invasion of a foreign nation that Australia had no quarrel with is against all ideals of modern society.

Remembering the summary execution, widespread rape and theft committed by these ‘brave’ Anzacs in Egypt, Palestine and Japan.

Jody*, an Australian Army medic who served in Timor Leste and Afghanistan, tells upstart that he was personally offended by McIntyre’s tweets.

“There’s a lot of pride having served and… [McIntyre’s tweets] go against all ethos taught and upheld by the Australian Military,” he said.

McIntyre’s tweets and consequential sacking have provoked a range of responses from Twitter users. The tweets have sparked vehement abuse and condemnation, but also called into question the sanctity of the Anzac legend.

While the likes of Malcolm Turnbull and Andrew Bolt condemned McIntyre, John Pilger and others expressed their support.

Difficult to think of more offensive or inappropriate comments than those by @mcintinhos. Despicable remarks which deserve to be condemned.

@mcintinhos respect for your calling out of the jingoistic myth of ANZAC. Lest we forget they were pawns in an invasion that won no freedom.

Twitter has been brimming with debate about the line between commemoration and glorification following the tweets. While many have responded by defending the Anzac legend, others have questioned a tendency toward nationalistic glorification of war.

Nick Ilic, an ex-soldier of the Australian Army who served in Afghanistan, questions the generally accepted notion that Anzac Day is sanctimonious and beyond criticism. His opinion piece, published on Sunday, methodically outlines the historical truths behind McIntyre’s tweets while subtly acknowledging the heedlessness of them. His ultimate question–is war worth it?–is arguably legitimised by his credentials as a veteran and raises questions about how we, as a nation, celebrate Anzac Day.

While SBS claims to have designated “unprecedented resources” to their Anzac Day coverage, multiple commentators have raised concerns about the way the 100th anniversary of the Gallipoli landings is being presented.

Jonathan Green asked: “Why would we be surprised when the Anzac centenary becomes little more than a carnival of jingoistic schmaltz and corporate opportunism?”

The ABC’s Lest We Forget What? also calls into question the presentation of the battle at Gallipoli as a glorified moment in Australian history, and #anzacdayselfies exemplifies a modern trend toward celebration rather than commemoration of the Anzacs.

Another issue that was widely acknowledged and debated on Twitter was McIntyre’s right to free speech.

It is a sad and sorry day for freedom when someone gets the sack for an opinion that others don't like. #ScottMcIntyre

Those on the right who defend free speech, should be supporting #ScottMcIntyre, but clearly not the case #doublestandards

Many have expressed concerns that McIntyre should have the right to express his individual opinions, irrespective of his position at SBS. McIntyre certainly isn’t the first Australian journalist to test the parameters of free speech; however, his punishment has come more swiftly and decisively than others.

An article published on New Matilda, 12 Times Conservative Commentators Were More Outrageous Than Scott McIntyre And Kept Their Jobs, acknowledges the power and scope of free speech as a defence, especially for more “conservative” journalists. Andrew Bolt, for example, has famously argued for broader freedoms of speech, yet heavily criticised McIntyre.

SBS Managing Director Michael Ebeid initially attempted to absolve SBS from responsibility but was bombarded with demands to sack McIntyre.

Comments from @mcintinhos are his own, disrespectful and not at all the views of @SBS. We remember and commemorate our ANZACs.

In a statement on Sunday, Ebeid said: “Late on Anzac Day, sports presenter Scott McIntyre made highly inappropriate and disrespectful comments via his twitter account which have caused his on-air position at SBS to become untenable.”

A later report by The Guardian claims that McIntyre was sacked for refusing to remove the tweets, suggesting that he had an option but was willing to lose his job for the comments. He also thanked John Pilger for supporting him.

According to the SBS’s Social Media Protocol, staff are required to “treat everyone with honesty, respect, fairness, courtesy and sensitivity”. McIntyre’s tweets were honest and at least partly factual, but few would deny that they were tactless and heedless.

Depending on where you stand, McIntyre has either been correctly reprimanded or relegated to martyrdom. Meanwhile, on social media, the debate about the sanctity of Anzac Day and the scope of free speech continues.