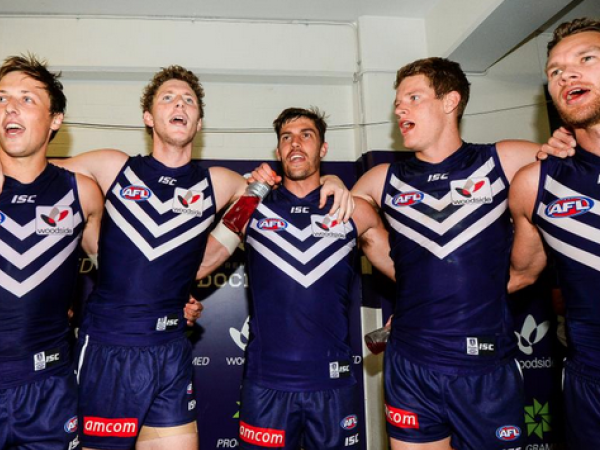 In sports dialect it is often said that the best offence is a good defence. And in the AFL, as defensive prowess goes, there’s surely no equal to Fremantle.

It’s the defining quality of every side with Ross Lyon at the helm, and true to form the Dockers have been happy to unequivocally adopt his style.

But when Freo failed to kick a winning score against Hawthorn in last year’s AFL Grand Final, Lyon had to confront an uncomfortable truth: his team lacked scoring potency.

It’s an unusual trait for a team that finished third on the ladder, as the Dockers did in 2013, to possess. Nonetheless it was a warranted critique, given Fremantle finished way back in 13th for most points scored in that very same season.

In a bid to ameliorate the Dockers attacking deficiencies, Lyon declared before Round 1 he would make some minor adjustments in a bid to find two extra goals a game. And now on the eve of September, the master-tactician has seemingly found the delicate balance between attack and defence.

Fairfax sports writer, Daniel Cherny, tells upstart he believes Fremantle has made a conscience effort to impact the scoreboard more frequently this season.

Ross Lyon has repeatedly fallen agonisingly short of coaching a side to a premiership. Three grand finals defeats — with St. Kilda (two) and Fremantle (one) — a surprising blemish on an otherwise outstanding coaching record (67 per cent win rate).

Cherny says Lyon may have recognised his side is in need of more attacking flair.

“After getting so close in ’09, ’10 and ’13, as well as being very competitive over the best part of seven years and always having one of the best defences, I think Lyon realised … he can take more risks. And his sides will still seldom lose,” he says.

However, defence, not attack, has once again been the bedrock of Fremantle’s play in 2014, boasting the AFL’s most miserly defence — conceding on average 70.7 points a game, up from 69 in 2013.

Although the Dockers have not reached their two-goal target increase this season, being marginally down on scoring in 2014 in comparison to 2013, in recent weeks his forward line seems to have struck form.

Over the last three rounds Fremantle has kicked 100 points plus on each occasion, a feat the club managed only five times before Round 21.

It’s a statistic given legitimacy by the Dockers reaching the triple figure milestone against two top quality teams, in Hawthorn and Port Adelaide.

The lift in Fremantle’s scoring output has coincided with the return of lively forward Michael Walters from injury, after recovering from a dislocated tendon in his left ankle.

“Walters is a wonderful player,” says Cherny. “[He’s] such a good threat both at ground and in the air.”

Walters has kicked seven goals since his return, and there’s certainly an argument to say he has been largely responsible for Fremantle finding their attacking mojo in the last three rounds.

So is the 2013 All-Australian the key to Fremantle’s finals success this season?

“I not sure he holds the key. I think Lyon, like anyone, knows you need a lot of guys doing their job,” says Cherny.

“I think that’s most important at the end of the day … you need your absolute stars playing well, and Walters is probably just a shade below that level.”

However, Cherny admits that, at his best, Walters could be the difference for the Dockers.

“He’s an important player though, and on his day he can be a match-winner,” he says.

Obviously Fremantle can’t hope to match Sydney in terms of forward class in its qualifying final on Saturday, with the Swans showcasing the likes of Franklin, Tippett, McGylnn and Reid.

But if Walters, Pavlich, Ballantyne and co. can play to their potential, perhaps Fremantle finally have enough forwards in form to kick a winning score over 3-4 weeks of finals – something a Ross Lyon side is yet to do.

It’s also crucial that Freo’s midfielders in Nat Fyfe (21 goals this season), Michael Barlow (16) and David Mundy (10) sneak forward and cause some damage whenever a chance presents itself.

The next four weeks will uncover whether the Dockers finally have an adequate amount of forward flair to complement its obvious defensive virtues. And whether Fremantle can score, rather than strangle, its way to a first flag.

Callum Godde is a third-year Bachelor of Journalism (sport) student at La Trobe University and the sports editor of upstart magazine. You can follow him on Twitter:@calgodde