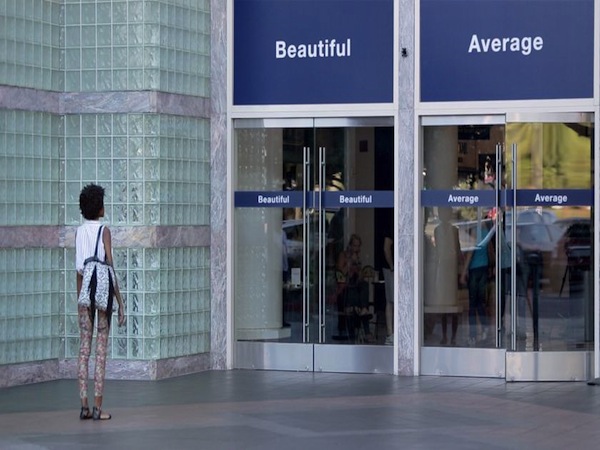 There are many ways to describe a woman. Smart, successful, kind – the list goes on. Dove‘s decision to present women with just two of these options in its most recent advertisement has been met with mixed reactions.

The beauty giant’s advertisement centres around a four-minute video and takes place in five major cities: San Francisco, New Delhi, Shanghai, London and Sao Paulo. Women are presented with two doors to a building, and two options – will they choose to identify as beautiful or average?

A puzzled look appears on most women’s faces as they approach the doors.

Unsure of themselves, many women choose the door they feel best describes them.

“Beauty to me… it’s far too out of reach,” says one woman as she proceeds through the “average” entrance.

Another woman says: “It was a bit confronting to see these big signs and feeling like you had to choose, and be self-conscious of how you perceive yourself and perhaps if it lines up with how the rest of the world perceives you.”

Christine Morgan, CEO of The Butterfly Foundation, told upstart that the campaign is a big step towards addressing the problem of increasing negative body image and eating disorders in Australia.

“People of all ages are bombarded with images that often promote unrealistic, unobtainable and highly stylised appearance ideals which have been fabricated by stylists and digital manipulation and cannot be achieved in real life,” she says.

“Campaigns like this take a stand against the media’s narrow standards of beauty, highlighting that beautiful is subjective and should never be stereotyped.”

The “Choose Beautiful” advertisement is the most recent instalment in Dove’s “Campaign for Real Beauty” that aims to improve the way women view themselves. In ten years, Dove’s self-esteem movement has reportedly boosted Dove’s sales from $2.5 billion to $4 billion.

Previous advertisements by the company include the 2005 “Tested on Real Curves”, which featured photographs of everyday women in white underwear, and the 2013 “Real Beauty Sketches” video.

Dove prides itself on representing reality. Its campaigns aim to feature real women, real bodies and real facts, even if the truth being revealed isn’t so pretty.

But not everyone is praising Dove’s latest message.

Dove may aim to breakdown the media’s heightened standards of beauty and replace them with a strong message of female empowerment, but this particular advertisement has backfired somewhat and caused other women to speak up.

Those speaking up want more doorways and more options. Where are the doorways labeled “Smart” or “Funny”? Women should be able to #ChooseClever or #ChooseSuccessful, or perhaps #ChooseKind.

Come on @Dove! You can create a more empowering message than making women choose between 'average' and 'beautiful! http://t.co/pXT55Yy7zS

I didn't #ChooseBeautiful. I chose to block the Dove Twitter account so I'll stop seeing their offensive faux-spirational promoted tweets.

Ms Morgan agrees that there should be multiple options, but believes the advertisement does help reinforce that beauty is about self-confidence and health, not the pursuit of attaining an unrealistic and idealised external look.

“We need to train our minds to focus on the positive attributes of our body, our benefits of good physical and mental health, and learn how to deal with the feelings we have when we are going through these changes in our lives,” Morgan says.

“Ads such as this one help people to learn to intuitively understand that there is no right or wrong when it comes to body shape or appearance.”

Despite all of the controversy surrounding this campaign, marketing that empowers viewers works wonders for the beauty brand.

Although a more meaningful and wide-reaching definition of “beauty” would be preferable, Dove’s advertisement has encouraged many women across the globe to address their negative perceptions of themselves and embrace their appearance.