Playing for Melbourne University in the VFL Women's competition and participating in exhibition matches, Stevens is determined to play in the AFL, Christopher Chrysostomou writes. 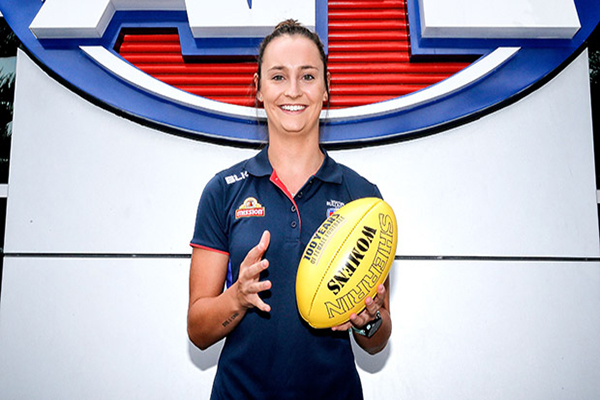 Nicola Stevens before an exhibition match with the Bulldogs. http://www.afl.com.au/

Nicola Stevens comes from a family with a rich football history.
Her grandfather, Ron Stevens, was an Essendon timekeeper for 53 years and is a life member of the club. Being brought up in the inner sanctum of a club helped spur her into becoming a professional footballer.

The 23-year-old plays for Melbourne University in the VFL Women’s competition and the Western Bulldogs in exhibition matches, while also studying osteopathy at Victoria University.

Stevens admits it is a heavy workload but you won’t see her complaining, instead she takes the challenge in her stride.

“You’ve got to be good at managing your time,” said Stevens.

“If it means I have to stay at home studying on a Friday or Saturday night then I will because footy and uni are really important to me.”

Stevens says the reward for this hard work is becoming an AFL footballer and a role model for young girls.

“When I was young I had people I looked up to and they were all male footballers,” said Stevens with a smile.

“Now females will have the opportunity to look up to a female footballer…I can’t believe that could be me.”

Selected at pick 18 by the Western Bulldogs in the 2013 inaugural women’s draft, Stevens has spent a majority of her career at half back. But this season she has experienced some time up forward.

By her own recognition, Stevens says half back is where she belongs. But to reach her full potential, Stevens admits she needs to play in different positions.

“As much as I say I’m a defender, I want to develop a different side to my game,” she said.

“I want to develop more of a running role and move up to the wing and as much as I say I don’t like playing up forward, I need to use it as an opportunity to develop my game, so I can become more draft appropriate.”

Steven’s determination to get the best out of herself has aided her in her recovery from a serious knee injury.

Stevens tore her ACL in her left leg in 2014, but managed to return to play the final five home and away matches, plus two finals for Melbourne University in the 2015 Victorian Women’s Football League.

This season while playing a practice match for the academy, Stevens suffered cartilage damage in her right knee, which forced her to miss the first three games of the VFL season.

But despite by the injuries, Stevens returned and in her second match she put in a best on ground performance to seal a victory for Melbourne Uni.

Stevens believes the opportunity to be a coach and a trainer has helped develop her own game and has ignited her coaching aspirations post her playing days.

“Coaching helped me understand the game more and is something I will want to do in the future. Maybe not so much a head coach but I would like to be a line coach one day,” said Stevens.

For now, Stevens is only focussed on playing the game she loves and after missing so much time through injury, she is happy to be back on the field.

“Footy is my little outlet and it is where I forget about the world and anything else, it’s my happy place.”

Christopher Chrysostomou is a second-year Bachelor of Media Communications (Sports Journalism) student at La Trobe University. You can follow him on Twitter @MrCdotC