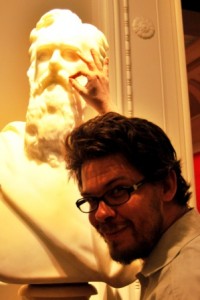 Painter, sculptor, graphic artist and award winning photographer Edan Chapman moved to Melbourne with a mission. At 27, he wanted to use his experiences to help young people who are less fortunate than most.

Edan’s artworks capture everything from creatures to cathedrals and some people are instantly captivated by his work. Those who aren’t usually change their tune when they find out he is deaf and has only 10% of his vision.

Edan suffers from Ushers Syndrome, meaning he is profoundly deaf and experiences night blindness.  Just one look at Edan’s photos makes it clear that nothing has stopped him from following his passion.

Edan was born deaf so Auslan is his first language but he didn’t begin to lose his vision until he was 13. He had already shown a creative flair and was frustrated by the prospect of not being able to do what he loved.

Edan went to many different schools but fortunately ended on a high note, feeling confident as he set off to pursue a career as a masseuse. This dream was quickly forgotten after a demoralising job interview at a massage school in Wellington.

‘I was completely horrified at the people’s attitudes towards my deafness and vision. They kept coming up with negative reasons and how difficult it would be.’

That experience didn’t stop Edan. He went to the Deaf Association where his experience was the opposite. The association set him up with a scholarship, through The Learning Connection (TLC), to study arts in Wellington and since then he hasn’t looked back.

In an industry where unique is the norm, Edan believes he has an advantage.

‘I think it’s an asset to be different. People remember me.’

Edan has already began to use his ‘asset’ to help young deaf students at the Victorian College for the Deaf (VCD) where he teaches film and media.

Originally the first step on Edan’s mission was to secure a $10,000 cultural grant to fund his project. Unfortunately red tape got the better of him but that led him to the VCD. There he was not only offered work but he has also received an even bigger grant.

Edan is keeping the details of his project close to his chest but it is clear that his passion for helping others will be at its core.

‘One of the major reasons I wanted to come to Melbourne was to find some way of helping these kids out there who have nothing.’

While he has been impressed by the facilities for people with disabilities in Melbourne, he says there are still areas that need improvement.

‘I found out this year that there are only 3 fathers of deaf children in the whole of Victoria who can sign.’

Edan’s enthusiasm is a real asset says Kellie Tori from the VCD who works with Edan on independent projects, as well as at the college.

‘He is bundle of energy and a fabulous role model to deaf students, he really shows them what they can achieve,’ says Kellie.

Edan encourages everyone, no matter their abilities, to express themselves creatively.

‘It’s great for disabled people since in virtually every area of visual arts you cannot really have a handicap.’

Edan Chapman is an inspiring role model for anyone who has a passion. He hopes the next generation of artists can benefit from his talent and enthusiasm.

Jyade Old is studying the Graduate Diploma of Journalism at La Trobe University and is part of upstart‘s editorial team. Follow her on Twitter: @jyadvantage.