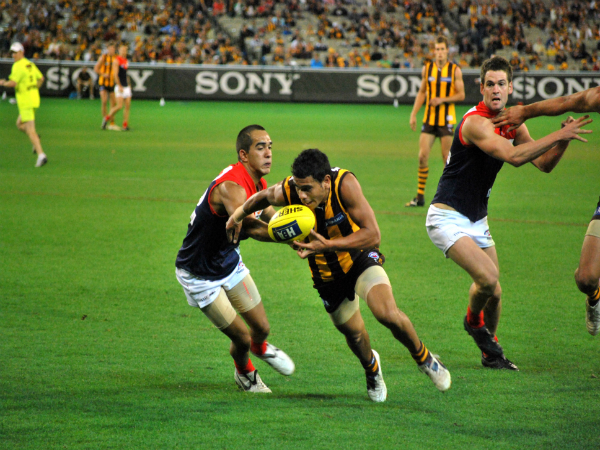 The winning runs were hit in the Cricket World Cup final on Sunday night at the MCG and preparations were underway soon after for Thursday night’s season opener between Carlton and Richmond.

The 18 teams in 2015 can be split up into three simple groups. There are five teams who are near certainties to partake in the finals, eight sides vying for the remaining two spots in the top eight and five teams who are in a rebuilding phase of sorts.

It will be tough to stop the Hawks from becoming the sixth side in AFL and VFL history to win three consecutive premierships. Al Clarkson’s side looked as good as ever when dismantling Sydney in last year’s grand final and won’t have to deal with the host of injuries and other distractions they did in 2014.

Port Adelaide’s fairytale rise to premiership contenders from 16th in 2011 and 14th in 2012 will take another step this season. The importance of the recruitment of Paddy Ryder from Essendon cannot be understated and Ken Hinkley will have learnt from the mid-season slump the club endured in 2014.

If Sydney is to go one better in 2015 and make it three flags in ten years, the club needs better output from Kurt Tippett. Alongside Buddy Franklin, Tippett has the potential to form one half of the most powerful and dangerous forward lines in the league but he needs to improve on 2014’s goal tally of 34.

The Cats are human after all. Age appears to finally be catching up with this famous team and they look to be spent as far as premiership tilts are concerned. Nonetheless, Geelong is still a very good side and capable of being a great one on its day. Tom Hawkins finally has the support he needs in the form of Mitch Clark, but this Geelong side will not possess the intimidation factor that it’s had for the last eight years.

The mental demons of the 2013 season have been buried under two monumental finals wins–first a five goal comeback against Essendon, then holding off a late surge to defeat Geelong–and North is ready to join the elite in the AFL. The recruitment of Shaun Higgins and Jarrad Waite brings added depth as North looks towards another deep finals run.

The Dockers could easily have been in the first group but there are plenty of queries over the side in 2015, chief among which is age. The spine of the team–Matthew Pavlich, Aaron Sandilands, Michael Johnson and Luke McPharlin–are all on the wrong side of 30 and not the players they once were. The midfield remains elite, though tagger Ryan Crowley (provisional suspension) will be sorely missed. The semi-final loss to Port Adelaide, in which they led by as many as 31 points, suggests the team lacks the pace to contend with the, at times, blistering styles of premiership favourites Hawthorn and Port Adelaide.

Lost in the narrative of Richmond’s nine game winning streak to snatch a finals berth was that Damien Hardwick’s men proved they are a seriously good side. They lack the quality of the leading group and Jack Riewoldt is still in dire need of a partner in crime up forward but the Tigers will there or thereabouts again in 2015.

Alongside GWS, the Suns are the scariest prospect in the AFL. Most of the young guns recruited to the expansion side with the draft concessions afforded to them are now starting to blossom and the Suns are ready to take part in their first finals campaign under new coach Rodney Eade.

With the Essendon players embroiled in the ASADA investigation cleared of all charges by the AFL Anti-Doping Tribunal, the club will be able to field a full-strength lineup. Unfortunately it is tough to see where the improvement comes from this season, a heavily interrupted pre-season in addition to the loss of a top three player (Paddy Ryder) is far from an ideal off-season.

The Crows are one of the toughest sides to analyse before the season begins, mostly because an unknown commodity in Phil Walsh is set to take the reigns as the new head coach. The club will be the centre of speculation surrounding the expiring contracts of Patrick Dangerfield and Rory Sloane all season regardless of performances. Newly anointed captain Taylor Walker returning to his best will be a huge factor in how the season goes for the Crows.

The Eagles are as exciting as any when at their running and gunning best but that was rarely seen last season. They will retain the title of flat track bullies but, with 2014 best and fairest Eric Mackenzie ruled out for the whole year, the 2015 season may have ended before it began for West Coast.

Brisbane’s rebuild was given a huge boost when superstar midfielder Dayne Beams and Allen Christensen joined the club, giving the Lions the foundations of what could be a great midfield. The Lions forward line will struggle but the midfield alone will be enough to see the club surpass last year’s total of seven wins.

Simply being competitive won’t be enough for the Giants this year – the team has to get wins on the board. The club showed glimpses of a good side last season but consistency will be key for 2015. The experience of Ryan Griffen and Joel Patfull will go a long way to achieving that consistency. Perhaps no side has ever had as good a trade period as the Giants did in 2014, acquiring two proven guns in Griffen and Patfull and ending up with three picks inside the top seven of the 2014 National Draft.

The outs far outweigh the ins for Collingwood this season. Dayne Beams, a key cog in the midfield, is gone and the Pies are looking lacklustre all over the ground.

The rebuild will continue for Carlton in 2015. They will cause an upset here or there on the backs of Marc Murphy, Chris Judd and Bryce Gibbs and there is plenty of young talent to be excited about but finals are still a couple of years down the track for the Blues.

They pulled off the biggest surprise trade of the off-season in getting former number one pick Tom Boyd from GWS but ultimately the Bulldogs are still a few years away. Star midfielder Tom Liberatore is set to miss the season with a ruptured ACL, exacerbating the loss of captain Ryan Griffen.

There is no such thing as a quick fix for the situation the Demons found themselves in but slowly and surely the list is being re-populated with quality youngsters and the club is finding an identity again under Paul Roos.

The Saints are another team restocking with quality youth in the midst of a rebuild. It’s hard to see them surpassing last year’s win total of four as the youth are too inexperienced and age catches up with the older heads.

*assuming the decision of the AFL Anti-Doping Tribunal is upheld pending any potential appeals.