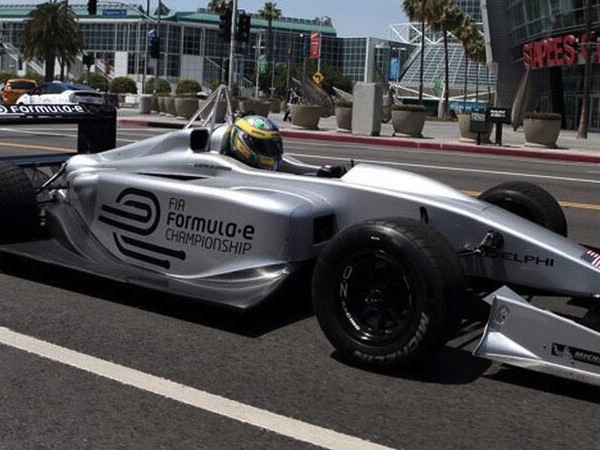 The distinctive rumble of V8 engines and the smell of burning petrol are elements synonymous with motor racing around the world. But when spectators line the streets in some of the most well known cities on the globe next year for a brand new world racing championship, there will be an absence of both.

For the casual motorsport fan, the cars will look almost identical to a Formula 1 or GP2. They are open-wheelers and very, very quick.

Despite having a top speed of over 220km/h, there won’t be a need for earplugs. In fact, there will barely be a whimper of noise reverberating off the buildings of the street circuits of Rome and London.

That’s because Formula E, a brand new FIA sanctioned series, will feature all electric cars – the first motor racing championship of its kind.

The series will begin in 2014 with a race in Rio de Janeiro and will consist of ten teams, each with two drivers. The prototype car, which has been produced by Formulec, has a Lithium Ion battery that lasts for 25 minutes between charges. All entrants in the series may use the Formulec prototype, or build their own cars providing they fit into the FIA’s strict regulations.

This leaves the door open for car manufacturers such as Toyota and Honda to become involved in the series, while French giant Renault this week signalled its intention to create a factory Formula E team.

Many observers would be begging the question as to why such a championship has been formed, especially when other open-wheel series’ such as Formula 1 and GP2 seem much better options on first glance. When you scratch beneath the surface though, it makes quite a bit of sense.

Featuring zero-emission cars, Formula E will be able to race in places Formula 1 can’t. Every race of the season will be held on a street circuit in city locations, which were previously out of bounds for other motorsport categories because of noise pollution concerns.

Another benefit for the FIA is that Formula E will give the organisation something to point to in its battle with the European Commission and the eco-warriors, who argue that F1 is not ‘green’ enough.

Truth be told, F1 never has and never will be an environmentally friendly sport. It simply isn’t possible.

Comparatively, Formula E is much more eco-minded and provides a platform for manufacturers looking into the production of electric road cars to test new technology in their race cars.

Many performance and safety features we see on today’s road cars were pioneered on the race track, and it is very possible that Formula E could help revolutionise the electric car industry.

The organisers of the series, Formula E Holdings, have been very clever in choosing the cities in which they want to race.

London, Beijing, Rio de Janeiro and Putrajaya amongst other cities are places that have significant roles to play in the motoring industry due to their high population and congested roads. By bringing Formula E to those cities, it is hoped the awareness of electric-powered motor vehicles will increase.

CNET reported that smog-filled Los Angeles is the newest city to embrace the technology.

In terms of the on-track action, one potential drawcard for the series is that instead of pit-stops, drivers will jump out of their cars and hop into a new fully-charged one half way through each race. This is due to it being near impossible to change a battery in a reasonable time that would add to the spectacle, not to mention that a battery change during a race would not meet safety requirements.

Both the FIA and Formula E Holdings will be hoping the series doesn’t end up on the motorsporting scrap heap, along with A1 Grand Prix and Super League Formula, which both had promise but ultimately failed.

With some more careful planning, this might just work.