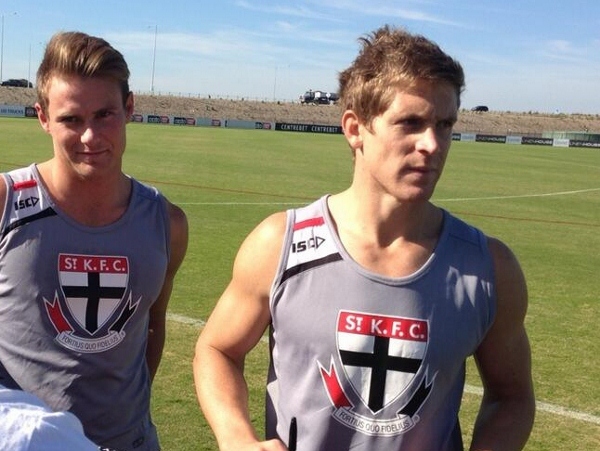 As part of La Trobe University’s The Emerging Journalist program, the upstart team will scour all 200-plus student blogs, picking out one piece per week to publish each week. We’ve decided to spotlight Sean Ellicott’s, Sean Ellicott Football, and his interview with St Kilda star Nick Dal Santo. It’s published below, and be sure to check out Sean’s blog for all his work.

Do you believe there is an issue or problem with performance enhancing drugs in the AFL?

I think generally there isn’t. But, if you had have asked me a couple of months ago before the Essendon scandal I would have said no not at all; I didn’t think there was any room in our game for recreational drugs or performance enhancing drugs. Obviously something is going on… but I definitely don’t think there is an issue. It might be an issue in one club at the moment, but I don’t think it’s widespread.

How well educated are players on the topic of performance enhancing drugs?

Every year we sit down for an AFL meeting where they cover recreational and performance-enhancing drugs. It’s thorough, so we do understand the rules, and that whatever you put into your own body is your own responsibility. I guess there is always room for improvement but the level that we know is definitely adequate.

Are you always aware of what substances (vitamins, etc) you are taking and putting into your system?

I am personally; we have two club doctors, three physios and we have access to outside resources for more information. The advice that the give us each year is that if you don’t know what it is, you have the right to ask and they right to refuse as well, anything outside of that is your own doing and you can face the consequences.

Could you see any justification as to why any AFL player would want to take performance-enhancing drugs?

I can understand why they’d want to do it, but I don’t agree with it. I don’t think there’s any place for performance-enhancing drugs in our game. There’s no excuse. I understand everyone is trying to get better and gain a competitive edge, but I don’t think drugs are the way to go about it.

Can you say how often you are drug tested?

I’ve had periods randomly where I’ve had five in five weeks. I’ve never had a positive test; I don’t take drugs, so that’s pretty simple. That’s my general message, if you don’t take drugs, you’ve got nothing to be worried about. But they (ASADA) do target tests, so if you’ve had a good year, they target you. I’ve had that a couple of times, where I reckon I’ve had five in five weeks.

But, I’ve also had periods where I don’t reckon I’ve been drug tested for six to eight months – it’s just random. I’ve never been tested at home, but I know boys who have been.

If Essendon is found guilty do you think it is justified that the club should lose premiership points?

I’m not sure. If they have been found to do something wrong then obviously something has to come of it, what that is I’m not really sure. I haven’t thought a great deal about it in regards to the penalties they deserve because I don’t really know what they’ve done and the involvement of it all.

If Jobe Watson was to lose his Brownlow Medal do you think that would be harsh?

That’s a big call. When Ben Cousins won his Brownlow, there was talk he was taking recreational drugs should he lose his Brownlow. I don’t know, it’s a huge call and I’m glad I’m not the one who has to make those decisions because it does have a big impact.

Had you heard of the anti-obesity drug AOD-9604?

No; still don’t have a clue what it means. Apparently it gives you a bit of a tan and apparently keeps your weight off, but never heard of it.

What are your thoughts on the three strikes policy?

I’m about rehabilitation, I think there is a place for that if you haven’t leant your lesson than something needs to come of it and the three strikes are that. I support the AFLPA’s stance on people making mistakes and copping the consequences, and out of that you go through a recovery program. If you continually do it then something needs to happen, but I think three strikes are fine. The AFL is a really healthy place, and the current policy is a good way to help players, as opposed to banishing them.

Have you spoken to any Essendon players about this recent issue?

I haven’t spoken to BJ (Brendon Goddard) a heap generally, and I definitely haven’t asked him about this. It’s a delicate situation, even though they are the opposition, you don’t like to see people getting written up in the paper every day and questioned.

Sean Ellicot is a first-year journalism student at La Trobe University. You can follow him on Twitter: @SeanEllicott