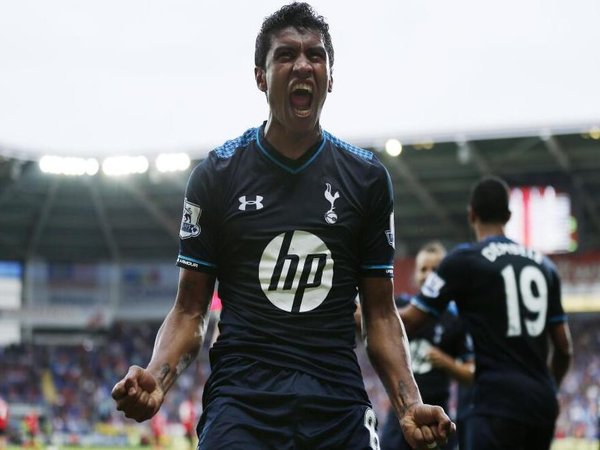 Andre Villas-Boas was beyond delighted after Paulinho’s last minute back-heel found the net at Cardiff last week, which keeps his Spurs right in the mix at the top.

However, they’re back at home this week with a much tougher task at hand. Villas-Boas’ former mentor Jose Mourinho and his Chelsea side will arrive at White Hart Lane confident of stretching their unbeaten run against Tottenham to eight matches. The match should be a tight, cagey game as the league’s best two defences go head to head.

A goal either way could be enough to decide this one.

Paulinho tells us he’s ‘so happy’ after scoring our late winner at Cardiff. http://t.co/JPU5ffzcT7 pic.twitter.com/42fvDkDDKq

Villa’s narrow win at Norwich last week came at a huge cost, with in-form striker Christian Benteke ruled out for 4-6 weeks with a hip injury. The young Belgian has scored five of his side’s six league goals thus far, which means the Midlands club will have to find another route to goal until he returns.

Manchester City are in imperious form, after flexing their power and muscles against their rivals United last week, and touching up Wigan Athletic 5-0 in the League Cup midweek. It’s very difficult to see how Villa can get anything from this game without their star man.

Fulham’s patchy league form was forgotten midweek as they beat a previously unbeaten Everton side in the League Cup. The win will have convinced manager Martin Jol that his side would improve in the near future. You only have to look as far as Fulham’s strike pair of Darren Bent and Dimitar Berbatov to realise that there is quality and goals in abundance in this Cottager’s side.

Hosting a well-organised Cardiff side is a perfect opportunity to turn their season around.

The first 20 minutes of this one should be very exciting viewing for Hull City supporters. They return to the comfort of home after a win at Newcastle last time out, and will attack this game from the off.

West Ham seem to have fixed their goal-scoring problem with five goals in two games this week, but in doing so, have also conceded the same amount. It’ll be all about balance now for Sam Allardyce, who will likely be happy with a draw.

West Brom finally found its form of last season against Sunderland a week ago, winning comfortably. They now travel to Manchester to face a United side that should be hell-bent on delivering a response to last week’s thrashing at the hands of their Sky Blue neighbours.

There have been ridiculous calls questioning the decision to appoint David Moyes, but United have faced Chelsea, Liverpool and City in their first five matches, and any in-coming manager would find that a tough initiation.

A winning run should start on Saturday for the Red Devils.

The Saint’s win at Liverpool last time out wasn’t a ‘smash-and-grab’ type victory; they created more opportunities with significantly less possession while keeping a clean sheet. They thoroughly deserved the three points.

Southampton now sits sixth on the table, but manager Pochettino isn’t looking any further ahead than this fixture at home to a Palace side that has showed encouraging signs until their last game with Swansea.

Crystal Palace’s manager Ian Holloway will want a response here, but it’s tough to see them getting anything again.

Swansea vs. Arsenal Sunday 2:30am EST

Arsene Wenger’s policy of fielding young players in the League Cup is not only beneficial for his squad’s development, but it also means Arsenal’s established stars get a full week off. This could be a huge advantage if its game against Swansea remains tight right up until the conclusion. Swansea will be playing their fourth game in nine days, three of which have been away and will now have the depth of its squad tested.

Swansea may tire late but Laudrup won’t accept that as a reason for defeat – he’ll be asking his side to fight the game out.

This is a clash between two sides looking for a positive response to disappointing losses last week. Norwich were wasteful at home to Villa, while Stoke conceded all three goals at Arsenal from set pieces, something Mark Hughes will not be happy with.

Stoke’s home advantage may just get them over the line here.

Sunderland vs. Liverpool Monday 1am EST

It’s been a turbulent week for Sunderland after it parted company with manager Paolo Di Canio following a run of poor results. It did get some after progressing in the League Cup, but Liverpool poses a hugely different challenge to Peterborough. Aided by return of Luis Suarez, the Reds should be able to heap even more misery on the Black Cats.

Everton vs. Newcastle Tuesday 5am EST

Roberto Martinez will want his charges to forget their League Cup disappointment midweek, and remind them that they’re still the only remaining unbeaten side in the league.

Everton’s opponents, Newcastle, had their good run unexpectedly halted by Hull City last week, and will have to turn in their best performance of the season to get anything from this match. They have played with greater freedom away from home and may arrive in Liverpool confident of a shock result.

Luke Sale is second-year Bachelor of Journalism (Sport) student at La Trobe University. You can follow him on Twitter: @lukesale1.