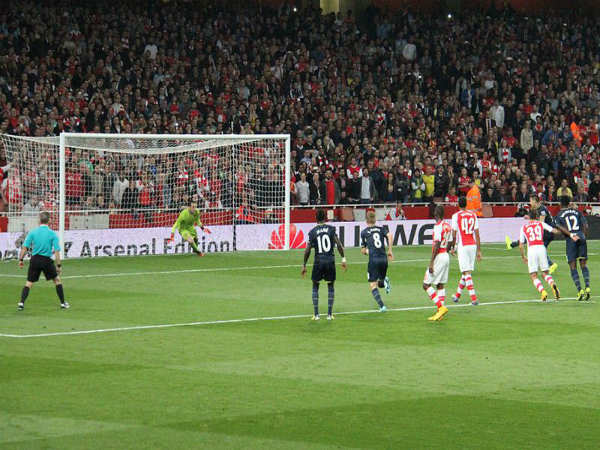 With Chelsea and Manchester City all but locks for the top two spots, it is left to Arsenal, Manchester United, Liverpool, Tottenham and Southampton to battle it out for the last two UEFA Champions League positions.

A further incentive for finishing in the top four is merit money. Clubs receive in excess of A$2.3m (£1.2m) for each place higher on the table they finish, meaning there is a substantial difference between the money earned for finishing third compared to seventh.

Still, the A$2.3m difference between fourth and fifth would not determine the season a success or failure. Premier League clubs are desperate to qualify for the Champions League in order to prove they can compete with Europe’s top clubs.

In each of the 17 seasons Arsène Wenger has been at the helm, the Gunners have finished in the top four. Having won seven of their last eight matches, Arsenal will look to keep hold of third place and avoid the Champions League play-off match that awaits fourth.

Alexis Sanchez has had a stellar first season for Arsenal, scoring 13 goals and registering seven assists already. The Chilean holds the key to the Gunners’ top four aspirations as his direct style and scoring abilities test even the best Premier League defenders.

Currently sitting fourth, Louis Van Gaal will be eager to hold off rivals and qualify for the Champions League in his first season as Manchester United’s boss. The Red Devils are playing with defensive discipline having conceded the third fewest goals this season, and are grinding out results on a consistent basis.

Angel Di Maria was voted 2014 Argentine player of the year ahead of compatriot and three-time Ballon D’or winner Lionel Messi. With eight assists so far this season, the playmaker’s pinpoint service from wide and central areas is vital for his teammates, Wayne Rooney and Robin Van Persie.

Unbeaten in ten matches, Liverpool is the in-form team of the English Premier League. The Reds are playing with supreme confidence and dispatching many of their opponents in style. After a poor showing during this season’s Champions League, Liverpool manager Brendan Rodgers will be desperate for another chance to showcase his team against Europe’s elite.

Jordan Henderson is set to take over as the heartbeat of central midfield for the Reds once current captain Steven Gerrard leaves at the end of the season. The Liverpool vice-captain sits fifth overall for total passes and equal third for assists in the league. Henderson has also added goals to his repertoire, with two long range strikes in his last two games.

Mauricio Pochettino is determined to attain a Champions League spot in his first season as Tottenham boss. Whilst sitting only three points off fourth place, the Spurs lack the defensive consistency of their rivals, conceding the most goals of any team still in contention for a top four finish.

Harry Kane has become one of the Premier League’s best strikers having already netted 16 league goals this season. Tottenham’s current goal tally is 46, meaning Kane has accounted for an astounding 35 per cent of his side’s total goals in the 2014/15 season. Should the 21-year-old find a way to continue his remarkable form, he may just be able to carry Tottenham into next season’s Champions League.

The Saints were predicted to struggle to stay in the top flight as they lost their manager, along with key players such as Luke Shaw, Dejan Lovren and Adam Lallana over the summer. Under new boss Ronald Koeman, however, they’ve exceeded all expectations and remain in contention for a shock top four finish.

Without a league goal in 2015, Graziano Pellè looks bereft of confidence. Still, he remains a key player as a return to the form that saw him net six goals in his first eight games may be enough to earn Southampton a top four finish.

Arsenal’s run home is quite favourable and the Gunners look likely to remain third on the table, be it only by a superior goal difference. Liverpool’s impressive form sees them squeeze into fourth place, one point ahead of Manchester United. Tottenham’s heavy reliance on Harry Kane means they must settle for a sixth place finish. Southampton can be content with seventh given the quality players it lost over the summer.