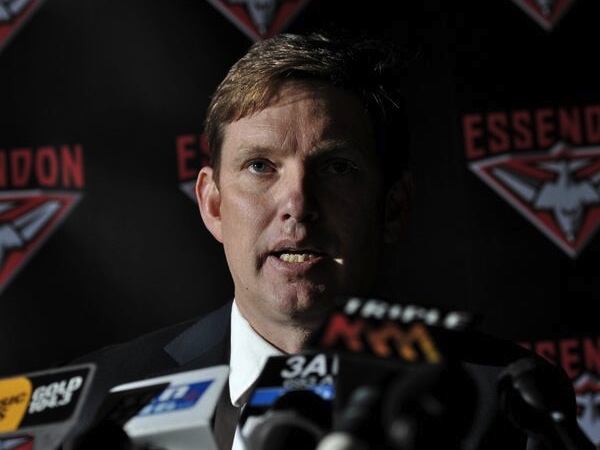 Essendon chairman David Evans announced on Tuesday that he will stand for re-election in November. The announcement came during a press conference that released the findings and recommendations of Ziggy Switkowski’s internal review of Essendon FC operations from August 2011 until now, which was commissioned by Evans in light of the supplement scandal at the club.

Given the current circumstances, it may be hard for anyone to think as far as post-season, but Evans’ decision was an important one nonetheless.

Most intriguing about the move is Evans had already been elected for a three-year term in 2012, and is therefore calling an election two years earlier than required. For someone in his position, it wouldn’t be uncommon to resign in the wake alleged club failings across multiple fronts. But, given that little information is clear about this case, Evans has chosen to deal with it once things become more certain.

The Switkowski review was modified for public use, with the full report only going to the club, the AFL and ASADA. Yet, even the sanistised version made publically available has raised more questions about the inner dealings at the club, describing irregular practices with reference to poor communication between employees.

However, Evans still stated the proverbial axe would still fall at Windy Hill, upon the conclusion of the ongoing AFL/ASADA investigation.

“Action and change will occur,” he warned.

Evans has sent a clear message to the public – whether he was directly aware of what went on inside Essendon or not, he has made himself accountable, and subsequently ensured others must follow suit.

In a message to club members, Evans described the Switkowski report as “uncomfortable reading”, and pledged a return on their continued support.

On top of the report, the club has taken its own measures to get to the bottom of its issues by enlisting pharmacological experts Dr. Andrew Garnham and Professor Ross McKinnon.

“They have been advising the board for the last three months,” Evans said.

“We’re getting more and more confident, for one about the safety profile, and indeed the fact that there was nothing banned that was given to our players.”

Despite his belief in the integrity of his club, Evans has not let this interfere with his cooperation with the AFL, ASADA and the media. This may, and should, prove his worth come the November election. While nothing will be certain until the findings of the AFL/ASADA investigations are released, the profession manner in which Evans has dealt with the club’s nightmare should not go unnoticed.

The players have followed his example, weathering the constant media storm to be sitting atop the ladder, undefeated after six games.

The result has been a sense of strength and dignity at Essendon.

Following the results of the AFL/ASADA investigation, the club will almost undoubtedly undergo heavy structural changes. The timing of the announced election will no doubt be critical as it serves the rebuilding of the club into 2014. Evans has accepted what needs to be done and it would appear that he’d rather get Essendon back in shape before securing his own position.

However, the Herald Sun’s Michael Warner has described it more as a “good tactic” than anything else.

“It doesn’t surprise me when you consider that there’s a whole lot of spin doctors and public relations people involved in this now,” Warner told FoxSports.

“I think if was serious he should probably consider resigning himself because ultimately he said that the buck stops with him.”

But, others have seen the situation differently.

David Evans doing the right thing here. No point having inquiries if you’re going to pre-empt them with action before they’re complete.

In light of the current situation at Bomberland, Evans putting himself in the hands of the members either demonstrates the strong support still present within the supporter group, or his commitment to accept the consequences.

In either case, many questions will remain unanswered at least until the AFL and ASADA can conclude their investigation. For now, Essendon members should observe their club closely: the bad times can help true character shine through.