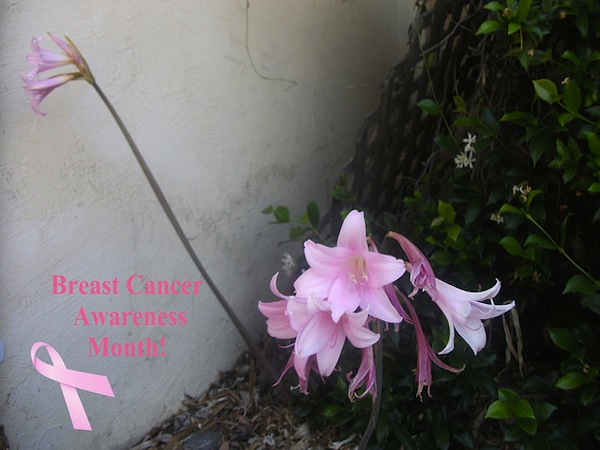 October is Breast Cancer Awareness month – dubbed ‘Pinktober’ – and aims to raise awareness and funds for vital research, giving hope to the people affected by this dreadful disease.

Shane Crawford, Brownlow Medalist and BCNA Ambassador, cycled his way from Melbourne to Perth in July, an incredible 3600km journey to raise awareness and money for BCNA. The Tour de Crawf raised a staggering $1.3 million.

Unfortunately, some people take the concept of awareness to ridiculous extremes and try to take advantage of people’s good will – using it for their own benefit.

The scam is called ‘pink washing’ and it involves convincing people to buy their pink products, giving the impression that part of the money is going to support breast cancer research when, in fact, it’s not.

Another scurrilous practice is the promotion of particular days with actions, rather than purchases.

Apparently October 13th 2013 was National No Bra Day, where women were encouraged to ‘set the tatas free’ to support breast cancer.

Thankfully, this was a faux event started by a Facebook meme. In keeping with social media tradition, it spread like vermin across all forms of social media. It appeared on a French website known as “boobstagram” which, as it’s name suggests, is a photo sharing website where women are encouraged to submit photos of their cleavage.

The ‘set the tatas free’ meme should not be confused with the foundation Save The Ta-tas, although confusion about the names is probably exactly what the creators of the Facebook meme were hoping for.

Save The Ta-tas are actually one of the good guys. The organisation commits 5 per cent of every sale to the Save the Ta-tas Foundation, as well as donating 10 per cent of all gross royalty income received from the sale of their licensed goods to fund vital research. Between 2004 – 2010 Save The Ta-tas donated approximately 50 per cent of their profits.

Naturally, the ‘set the tatas free’ meme outraged many, especially sufferers and survivors of the disease.

As the author of the blog Cancer in My Thirties puts it: “How on earth could a day where girls and women are encouraged to walk around with their nipples poking through their shirts be ‘supportive’ for women who are living with, or who have died from, breast cancer – or who have managed to complete the arduous treatments and disfiguring surgeries required to put them into remission?”

October 13th is actually the day we recognise those who have been diagnosed with metastatic breast cancer – cancer that has spread to vital parts of the body – making the meme even more offensive. 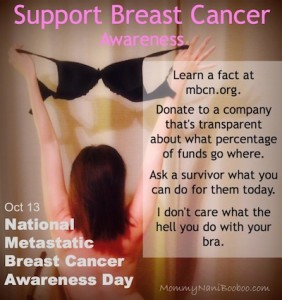 For many women at the metastatic stage of the disease, it’s about prolonging life and living as comfortably as possible. Many of them have already made the hard decisions about mastectomies and breast prostheses.

Honestly, there isn’t a worse day to go around bra-less.

No one wants their good will abused, especially when they believe their money is going to a good cause.

With no cure in sight, funds raised for breast cancer awareness and research are essential.

Give generously but give directly to organisations such as BCNA, the Cancer Council, Peter Mac and others who have shown exactly where donations are being spent.

Breast cancer is not a disease that should be taken lightly, especially when so many of us will be affected by it.

Awareness is a very valuable thing. Exploitation, however, is not.