An extra 2000 police have been rostered to manage the protest events. 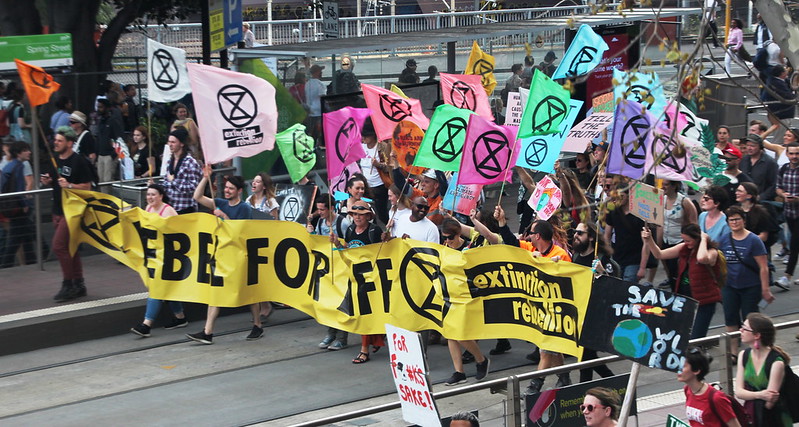 Protesters lay on the ground covered in white sheets, while others gathered outside Parliament House dressed in red as part of a climate change protest on Monday morning.

This is the first event in a week-long protest planned in the Melbourne CBD, as activists call for more action to tackle climate change.

Tram routes 86 and 96 were diverted via La Trobe street, along with the closure of the intersection of Spring Street and Bourke Street on Monday morning.

Melbourne commuters have been advised to allow for extra travel time when traveling through the CBD.

Extinction Rebellion wants the government to declare a climate and ecological emergency and to reduce greenhouse gas emissions to net-zero by 2025 and more.

“Our government has failed to protect us. We must intervene,” the group said in their description of the event.

With a second event planned for Monday evening, “mass disruption actions” are planned between 5pm and 7pm. The group is encouraging people to take the week off work and join them with some protesters planning to camp in Carlton Gardens for the week.

“We will be disrupting Melbourne as part of a coordinated national Rebellion in all state capitals. Help us make this a massive act of civil disobedience that no-one can ignore. We can’t afford anything less,” the group said.

An extra 2000 police officers have been rostered on to manage the protest activity throughout this week.

According to Victoria Police Assistant Commissioner Luke Cornelius, the group has been granted approval by the Department of Health to hold the protest.  The group, however, does not have permits to camp in Carlton Gardens he said, and if any were to set up camp, police would move the protesters on.

“If someone does set up a tent overnight, and they get under our radar, if they’re not packed up in the early hours of the morning, the City of Melbourne have told me they’re putting sprinklers on so people will find themselves getting very wet if they choose to camp overnight,” Cornelius told 3AW.

Photo: Rebel for life. Extinction Rebellion. #Melbourneclimatestrike IMG_5320 by John Englart available HERE and used under a Creative Commons Attribution. The image has not been modified.