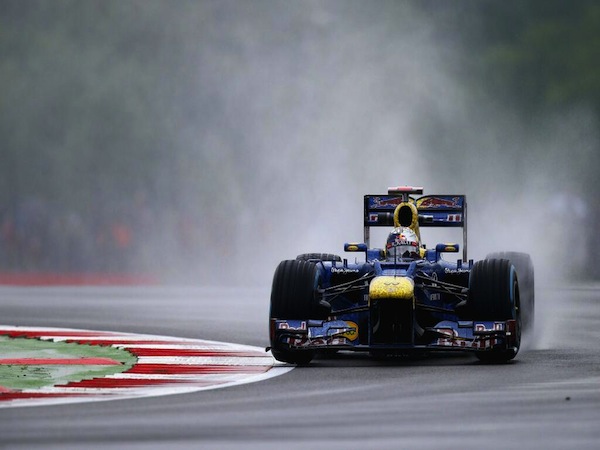 At the half way point of the Formula 1 season, we here at upstart thought it was about time a few mid-season awards were handed out to the drivers and teams who are making waves this year.

He’s 26, looks about 17 and acts like a 12-year old. A regular wise-cracking joke maker, though nobody seems to find him funny. Along with being labelled a sore loser, Vettel is widely seen as the most disrespectful teammate of the current crop of drivers.

Not a great image for Formula 1’s benchmark driver.

Nevertheless, winning has become habitual for Sebastian Vettel as he pursues a fourth consecutive Formula 1 crown. 2013 has seen the continuation of Vettel’s consistency, intelligence and skill as he once again enjoys a healthy points buffer to second placed rival Kimi Raikkonen.

Vettel has recorded victories in Malaysia, Bahrain, Canada and Germany but has been in winning positions in just about every other race. Qualifying for Vettel has also been flawless and with his favoured Asian tracks still to come, it looks as though it will take some sort of modern day sporting miracle to deny the German in 2013.

When Lewis Hamilton announced he would be jumping from the McLaren ship in 2013 to the unproven Mercedes team, the Brit was overcome with disapproval and negativity surrounding his seemingly poor decision. Fast forward nine months and that same team that enjoyed seven victories in 2012, has been winless, podium-less and nothing short of embarrassing in 2013.

From the first outing in Melbourne, McLaren struggled to find its feet and has been forced to play the catch up game – one which it has well and truly lost. New recruit Sergio Perez has struggled to fill the Hamilton void and has already tangled on track with McLaren veteran Jenson Button numerous times. McLaren sit sixth in the constructors’ standings and is on course for its worst season finish since 1981. All eyes are now fixed on Martin Whitmarsh to come up with some answers to not just save its season, but its credibility.

The back half of 2012 saw Ferrari’s Felipe Massa enjoying some of his 2008 championship challenging form, as he seemed to have rediscovered his old self. Massa closed the gap dramatically to his highly regarded teammate Fernando Alonso, and refuted suggestions his time at the Scuderia was up. As the new season rolled in, Massa was again showing promising signs with consistent top six finishes from even more impressive qualifying performances.

Then came his double shunt in Monaco which shattered his confidence just as much as his Ferrari. Massa has endured a rough ride since, suffering accidents at almost every outing, rendering Ferrari a one man band, as any hope of success is now pinned on Alonso. The vacant Red Bull seat may be a hot topic of conversation but there could be another high profile drive opening up if results do not swing back in favour of the Brazilian.

On a damp and miserable Saturday afternoon in chilly Montreal, little known Valtteri Bottas stunned the Formula 1 public by qualifying his Williams in an unfamiliar third place. Watching the Finn muscle his car around the Circuit Gilles Villeneuve was a spectacular sight as he staked his claim for the title of ‘class 2013’s best rookie’. An astonishing achievement and the most unpredictable since Nico Hulkenberg’s surprise 2010 Brazilian pole position.

In the dry conditions that hosted the race, Bottas may have lost places quicker than the laps would tick over, but he certainly demonstrated his true ability in a Formula 1 car that is sure to catch the eye of team bosses right down the pitlane. Well done Valtteri.

The Formula 1 road show swings back into action this weekend at the Circuit de Spa-Francorchamps, in Belgium. The race is never short of entertainment and could potentially provide the answers as to whether there truly is more than one lone contender for the 2013 drivers’ title.

Did we get it right? Who is your driver of the season? Comment below and let us know your thoughts.

Jake Michaels is a second year Bachelor of Journalism (Sport) student at Melbourne’s La Trobe University. Follow him on Twitter at @jmichaels193.