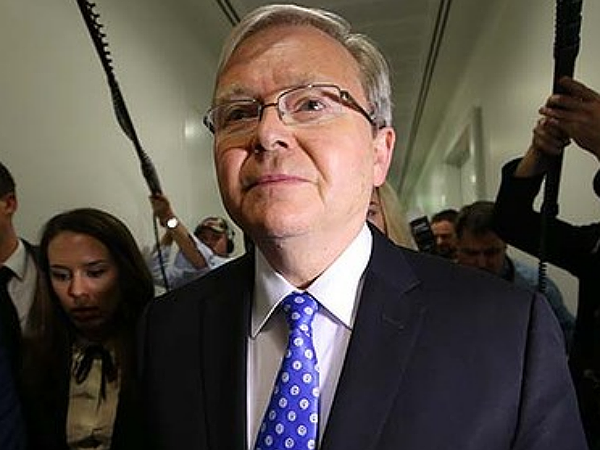 Three years after he was removed from the Labor leadership, Kevin Rudd galloped over the hill, emerging as the White Knight capable of steering his party clear of capitulation at the hands of Coalition opposition.

By ousting Julia Gillard as Prime Minister, a leader far superior to Rudd from a governance and policy perspective, the ALP doomed the nation to a federal election that’ll be little more than a popularity contest.

In his first speech to journalists last night, Rudd initiated the spin.

“In recent years politics has failed the Australian people. There’s just been too much negativity all around. There’s been an erosion of trust. Negative, destructive, personal politics. It’s done much to bring dishonour to our parliament, but has done nothing to address the urgent challenges facing our nation…In fact it’s been holding out country back.”

Surely the irony of the above statement wasn’t lost on the recently dumped ministers.

After all, if we were in the business of dishing out proportionate blame for the sorry state of affairs in recent years, Rudd’s name would be near the top of the list. It’s not beyond the realms of comprehension to suggest, had Rudd and his backers not spent the past three years poising the former Prime Minister at every turn, column inches would have been devoted to the 590 pieces of legislation passed by the Gillard government.

The 43rd parliament has been far from an unequivocal success, but it looks the stuff of legend compared to the ineptitude under the Rudd regime.

Even on its final day, Julia Gillard’s government achieved an major feat, with the education reform being passed through senate – not that you’d know it by looking at any front pages this morning.

However, none of that matters now.

Rudd’s seemingly undying popularity with large sections of the electorate made him the final option for a party desperately trying to turn back a tide of negative polls.

Already some have questioned what sort of policy a Rudd-led Labor can offer the Australian people to rescue the policy from a landslide defeat, but unfortunately, he doesn’t have to.

Rudd, along with Opposition Leader Tony Abbott, are both incredibly skilled at the game of politics, something evidenced in their immense support across the country. However, governance and policy isn’t exactly in either leader’s repertoire, meaning both would be politically wise to stay away from such tedious discussions.

If there’s a silver lining to be taken from yesterday’s embarrassing events, it’s that the hypocrisy of this election being treated as anything other than a quasi-high school president vote is unequivocally exposed.

Perched up high in the press gallery during outgoing MP Tony Windsor’s valedictory speech, the juxtaposition of our political sphere was clear.

As one of the most highly regarded members bowed out with dignity and admirable grace, the majority of political minds were elsewhere. The House was somewhat empty, and the press gallery conspicuously bare.

Even the security staff in the House seemed to agree, as they appeared to be huddled around a television set awaiting that announcement.

In his press conference before going to the caucus ballot, Rudd said “thousands of Australians”, had been personally asking for his return. As a result, we too played a part in this.

Collectively, we’d made our choice. This election won’t be one of politics, rather politicking.

Tags: #spill auspol cooking with gas Liam Quinn on a wave of ruddmentum rockin' round the caucus