German Gymnasts and Norwegian Volleyballers team up against over-sexualization 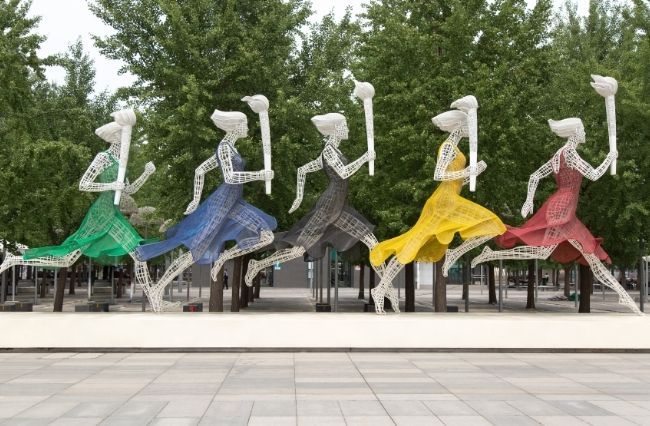 During their qualifying rounds over the weekend, the German gymnastics team adorned full-length unitards to protest the over-sexualization of women and ultimately be more comfortable during their match.

The German team; Sarah Voss, Pauline Schaefer-Betz, Elisabeth Seitz, and Kim Bu wore the red and white unitards in training earlier in the week and decided to toss aside the traditional bikini cut leotard for the competition.

Voss told Reuters that they wanted “to make sure everyone feels comfortable and show everyone that they can wear whatever they want and look amazing, feel amazing, whether it is in a long leotard or a short one.”

These full-length unitards are more in line with male gymnasts’ attire, which covers some part of the leg, if not the whole thing.

Members of the German gymnastics team sported similar unitards in April at the European Artistic Gymnastics Championships in Basel, Switzerland. At the time, the German Gymnastics Federation tweeted that the unitards sent a message “against sexualization in gymnastics”.

“To do splits and jumps, sometimes the leotards are not covering everything, sometimes they slip and that’s why we invented a new form of leotard so that everyone feels safe around competitions and training,” Voss told the BBC in April.

Women’s sports uniforms have continued to make headlines recently as the Norwegian beach handball team was fined 1500 euros ($Au2410), 150 euros per player, for wearing “improper clothing” during their bronze medal match against Spain. The team wore thigh-length elastic shorts to protest against the regulation bikini bottoms.

The choice to wear the bike shorts at their match was “very spontaneous”. Katinka Haltvik told Norwegian broadcaster NRK “We thought, let’s just do it now, and then see what happens”.

NHF President Kare Geir Lio said, “I got a message 10 minutes before the match that they would wear the clothing that they were satisfied with. And they got our full support”.

Musician P!nk spoke out on Twitter stating she would be happy to pay their fines and that the European handball federation should be fined for sexism.

I’m VERY proud of the Norwegian female beach handball team FOR PROTESTING THE VERY SEXIST RULES ABOUT THEIR “uniform”. The European handball federation SHOULD BE FINED FOR SEXISM. Good on ya, ladies. I’ll be happy to pay your fines for you. Keep it up.

The European Handball Federation (EHF) said in a statement the shorts worn by the players during the match were “not according to the Athlete Uniform Regulations”.

Women are required to wear midriff-baring tops and bikini bottoms “with a close fit and cut on an upward angle toward the top of the leg” and a maximum side width of 10cm while male players are allowed to play in tank tops and shorts no longer than 10cm above the knee, according to International Handball Federation regulations.

“It’s not (appropriate clothing for) the activity when they are playing in the sand,” Norwegian Handball Federation (NHF) President Kare Geir Lio told NBC News.

President Lio said the women’s team trains and competes in “what they want, like the boys” at home in Norway, but is subject to the International Handball Federation’s clothing rules when playing abroad.

The team had petitioned to the EHF to wear the shorts their players train in from the start of the tournament, Lio said, but was threatened with a fine or disqualification. After the criticism, the EHF said the negative reactions to the penalty were based on “disinformation on the procedure”. The issue of female uniforms is due to be discussed in a meeting in August.

Photo: Ladies running with Olympic torches in Olympic Park, China, Bejing by Sam Balye available HERE and used under a Creative Commons Attribution. The image has not been modified.