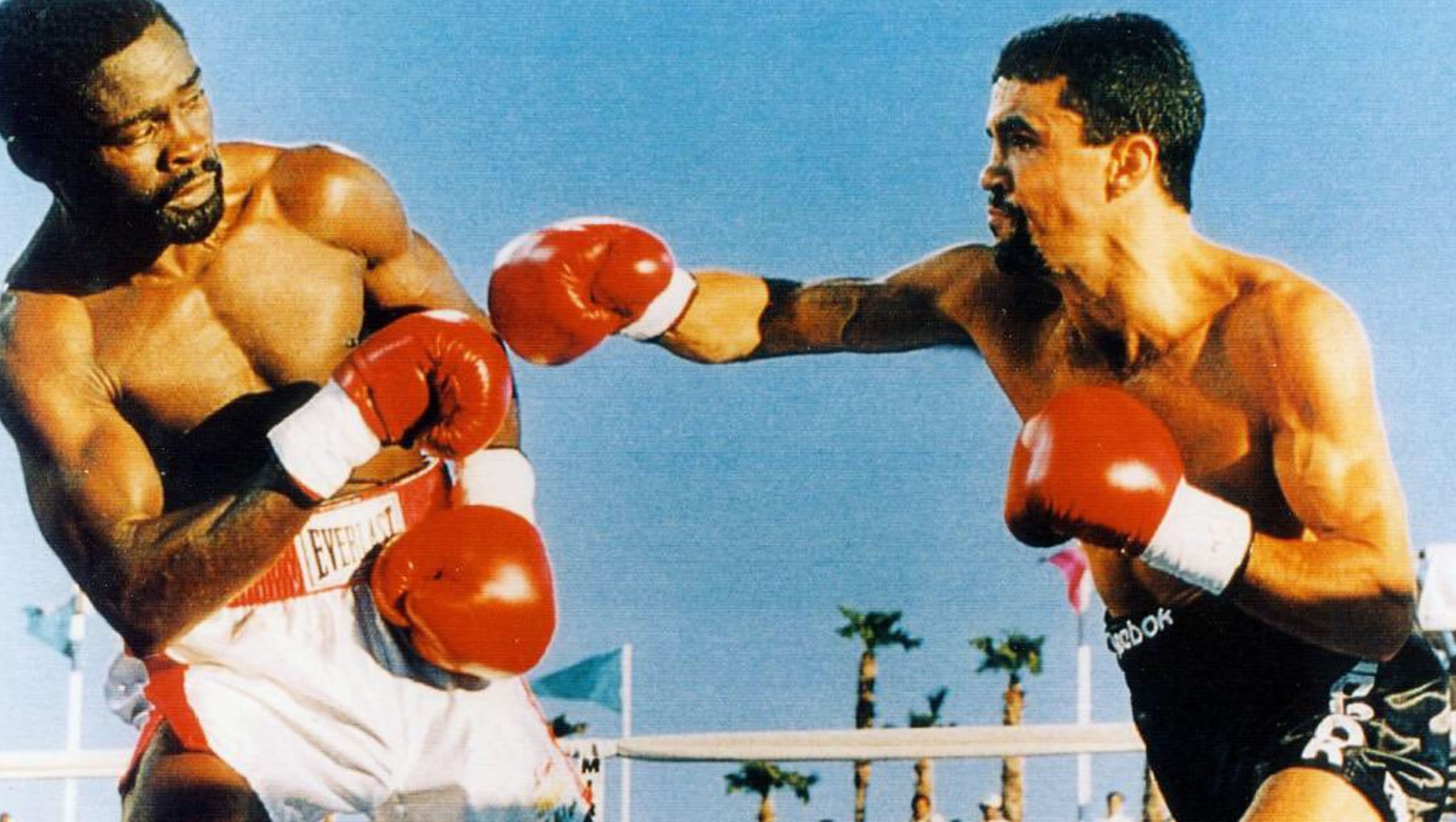 Jeff Fenech planted a kiss on his daughter’s forehead before strutting towards the ropes with a charismatic grin and his tongue out at the Las Vegas crowd.

The final bell had just rung on a 12-round marathon between the Australian hero, Jeff Fenech and Ghana’s own Azumah Nelson.

Fenech had been merciless with his onslaught on Nelson, who looked battered, bruised and lucky to be standing as the final bell echoed around the ring.

This was supposed to be a clear-cut decision. Fenech would become a four-time world champion and cement his place in boxing history.

But in a cruel turn of fate, the judges ruled the fight a draw as Fenech was left in complete disbelief.

Boxing promoter and commentator, Peter Maniatis remembers the day and the injustice of the shock decision.

“Just seeing Jeff’s face, he was disgusted. It was a draw and it was a complete highway robbery…it was one of the worst decisions I’ve seen in boxing,” Maniatis tells upstart.

“Jeff was going to become a four-time world champion and that was unheard of in four weight classes at the time. It ruined a massive occasion for Australia.”

#ThrowbackThursday — Jeff Fenech puts an exclamation point on his fight with Azumah Nelson with a tireless twelfth round showing 🔋#boxing pic.twitter.com/zgtoTiKhcL

As Fenech howled in anger at the controversial decision, the first seeds of a great rivalry were being sown.

This story, one of boxings greatest rivalries, still had two more chapters to be penned.

The iconic Melbourne ground, famous for its football pedigree, was about to play the backdrop for the second chapter in the Fenech v Nelson rivalry.

Fenech was out to re-write the script, to leave the bitter taste of the Vegas draw in the past and find revenge and redemption.

He was the national hero, carried an undefeated record and entered the fight the raging hot favourite.

“Everyone just thought that Jeff was going to knock Azumah out and get redemption…it was just supposed to follow the script,” says Maniatis.

The only problem for Fenech was that no-one told Nelson any of that.

Nelson smothered Fenech from the opening bell, as the Aussie hero hit the canvas in the first, second and eighth round.

The fight was waved off as a dazed Fenech slumped into the referee’s hands and the crowd stared on in disbelief.

“We were all devastated and couldn’t work it out. We just thought it was going to be a pedestrian win to Jeff,” says Maniatis.

However, former Australian world champion boxer, Barry Michael believes that Nelson probably deserved to be favourite for the fight with his experience and superior boxing knowledge.

“Nelson was deadly in rematches, he always did his homework…and he had so much more experience than Jeff at international level and against top fighters at that stage,” Michael tells upstart.

“For Jeff to even be there with Azumah after the disputed first fight, was a credit to him.”

The loss was a body blow to Fenech’s career, the first blot on an otherwise stainless resume.

The end often comes quickly in the sport of boxing and Fenech’s swansong was soon approaching.

“He got hurt so much emotionally from the [Nelson] loss, that I never thought he was the same boxer again. Sometimes you just have a loss that can take your heart away,” Maniatis says.

He was knocked out in his next fight against Calvin Grove, before squaring off with Phillip Holiday for the IBF lightweight title.

In the second-round, Holiday landed a lightning right hook to Fenech’s forehead.

The champ stumbled backwards before he collapsed to the canvas. The referee waved the fight off and Fenech left the ring for what was believed to be the final time.

The Fenech v Nelson rivalry was stored back onto the shelf, left to collect dust as a new generation of boxers began to make a name for themselves.

Fast forward twelve years to 2008 and Nelson received a phone call from an old friend.

The challenge was laid down and the 49-year-old boxing Hall of Famer agreed to come out of retirement for one last fight.

His opponent and old friend, the 44-year-old Fenech would also don the gloves one more time.

One last fight to settle an old score. One last chapter in an all-time great boxing trilogy.

“It was just something they wanted to do and get out of their system. Jeff had it in his stomach that he needed another fight…and they put on a great show and proved that age is no barrier,” said Maniatis.

While many reveled at the opportunity to see two old-timers wind back the clock, some believed that the fight didn’t help the sport of boxing.

“It was a bit of a gimmick, just a bit of a money grabber. Jeff was determined to get a victory over Azumah and he got the decision in what was really a bit of a laugh,” says Michael.

“To be fair, a lot of people went to see it and it was relatively well received…but I just don’t really think that boxing needs that.”

They were both a few kilograms and a handful of years past their peak, but it didn’t stop the two legends from putting on an entertaining fight in their third and final clash.

After ten rounds, Fenech was ironically awarded the decision by the judges.

Nelson later admitted he felt it should have been a draw.