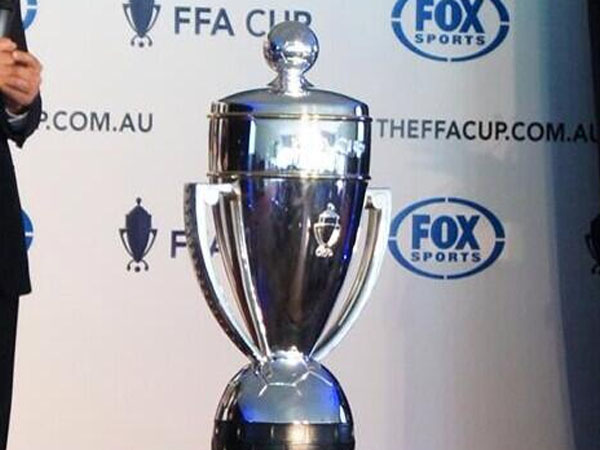 An event such as the FFA Cup on Australia’s footballing landscape once seemed an enticing prospect.

In its planning stages, punters frequently debated how the FFA could format the competition to make it a landmark event on the football calendar.

However Monday’s launch of the inaugural FFA Cup resulted in a sense of missed opportunities than anything else.

In theory, the model of a knockout cup competition in a similar mould to England’s FA Cup seems a great chance to promote football throughout Australia.

Thirty-two clubs from across the country – combining professional A-League teams with state league sides from regional and metropolitan Australia – playing for a trophy that could be heralded just as important as the premiers plate.

And yet the FFA’s missed the proverbial boat on an opportunity to make the tournament a showpiece event on the footballing calendar.

If you mixed the UEFA Champions League & FA Cup trophy into one, you might get this. That said, looks great #FFACup pic.twitter.com/uQWihUiPIn

First on the FFA’s agenda at the launch was the way in which the draw would take place. Ultimately, the decision was made to seed each side based on last season’s standings within the A-League and state league competitions.

However by seeding clubs based on standings within Australian football, the FFA has taken a shine off what should be “The Magic of the Cup”, ruining the premise of what the entire tournament should be based on. The unpredictability of the draw in England’s FA Cup is what makes the tournament so enthralling. At any stage of the competition, any side can be drawn to play against each other, regardless of their respective stature.

Instead, in the FFA Cup, A-League sides are handed an easier draw into the later stages of the tournament, while state league teams aren’t given an equal opportunity to test themselves against professional clubs.

Although the format of the draw ensures at least one state league side will qualify for the semi-finals every year, it almost seems patronising to piggy-back that one side into the final four, rather than let them progress on their own merits.

As much as state league sides would love to get as far into the competition as possible, players and supporters of semi-professional clubs would more so relish the opportunity of testing themselves against high-profile teams such as Melbourne Victory or Sydney FC.

Furthermore, the FFA announced if an A-League side was drawn to play against a state league team, the match would always be held at the venue of the Member Federation Club. As much of an advantage as this would be to a state league side, it deprives that club’s players and supporters the opportunity to play at ground’s such as the 45,000-seat Allianz Stadium or the 30,000-seat AAMI Park.

Not only does this make the competition less attractive for players and supporters, but also financially for state league clubs, who would potentially miss out on a higher gate receipt at bigger grounds.

Decisions regarding dates of fixtures and, in particular, the final, have also limited the FFA’s ability to make this tournament a showpiece event in Australian football.

Starting in the off-season (July) and finishing on a strange Tuesday evening time slot in mid-season (December 16) tarnishes the allure of the competition. Granted, the FFA had to deal with fixturing problems surrounding the 2014 World Cup and the 2015 Asian Cup, yet it still hasn’t made a decision on whether dates will be changed in the future.

Instead of making the final a one-off event, as it is in England, where it is held as one of the final matches of the season at a neutral ground, the FFA has allocated the 2014 final at a venue to be decided once both finalists have been confirmed, on a date in the middle of the season.

Alternatively, the FFA should have considered playing the final after the conclusion of the A-League’s regular season, to add to the competition’s finals feel. Additionally, had the FFA been able to hire a ground with a capacity in the vicinity of the MCG or the Olympic Stadium, the desire to compete in the tournament’s centerpiece would have been much stronger; in the same way the allure of playing at Wembley attracts English teams playing in the FA Cup.

The announcement of the FFA Cup is a marker for the FFA of just how much football within Australia has grown since the A-League’s creation in 2004. However the initial format of the competition doesn’t seem strong enough to establish the FFA Cup as a showpiece event on the football calendar.

The tournament is an intriguing prospect in the future, but it needs a strong backing from fans to make it something special. However at the moment the dates of fixtures, the venues and the draw isn’t appealing for supporters.

Whether the FFA can build on a promising platform in the future, without distractions such as the 2015 Asian Cup, remains to be seen.

Riley Beveridge is a third-year Bachelor of Journalism (Sport) student at La Trobe University, and is the incoming sports co-editor of upstart. You can follow him on Twitter: @RileyBev