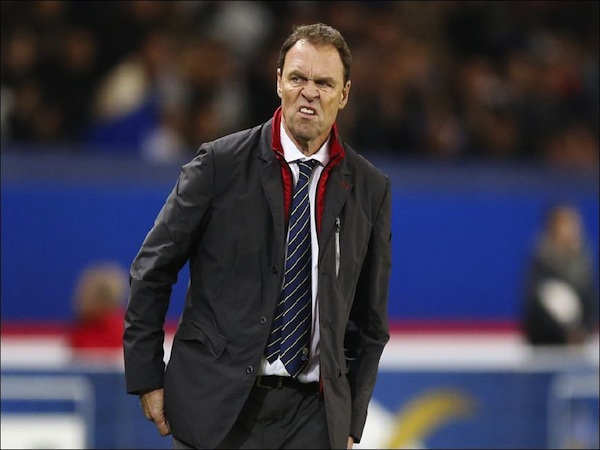 It reads more like a tennis match in which Rafael Nadal is about to destroy some poor unseeded soul who has dared to challenge him in the opening round of Roland Garros.

If only it was.

The Socceroos’ capitulations against football powerhouses Brazil and France resulted in the sacking of coach Holger Osieck, a man who the decision-makers at the FFA deemed to have ticked all the required boxes to lead the team into the 2014 World Cup.

In between the two nightmares in Brasilia and Paris, the Young Socceroos lost to not-so-football-powerhouse Vietnam 5-1 at the AFC U-19 Championship.

If Australia is to be taken seriously as a footballing nation, these types of results simply cannot occur.

While the insipid performances of the senior side dominated the headlines, the U-19s’ thumping in Kuala Lumpur went relatively unnoticed. In reality, the two are just as important as each other, as they are both about the future.

So where do the problems lie and who should take the blame?

This photo just about sums up perfectly the @Socceroos 6-0 loss to France. http://t.co/U7FZX5rQXg pic.twitter.com/jnToLOnu1Z

It is the decision-makers inside the offices of the FFA who should be apologising to the public, not stalwarts like Mark Bresciano.

There are some, particularly those new to the game, that see FFA chairman Frank Lowy as some sort of demigod who should be immune from criticism.

Yes, Lowy has done some great things for football. Commercially, the sport is miles ahead of where it was in the “dark old days” of the National Soccer League.

Yes, under Lowy’s leadership the Socceroos have qualified for three consecutive World Cups.

And yes, the hiring of Guus Hiddink in 2005 was a masterstroke.

But the immediate future looks bleak.

Both Osieck and his predecessor Pim Verbeek have contributed to this, but the lack of foresight from Lowy and the FFA is why Australian football is in this position today.

Quite simply, both Verbeek’s and Osieck’s main objective was to qualify the Socceroos for their respective World Cups. Both were successful in achieving that goal.

Want 2 say Thankyou to Holger for getting us to our 3rd WORLD CUP. Is this a first get us to WC and get the sack. Sad day for Football in oz

Sitting with Holger now, Australia should be proud and thankful. Asian cup final and WC qualification. Thanks and all the best boss!!

Neither however, used their time in charge to promote youth and regenerate an ageing squad that was past its use-by date post-2010.

Some will argue there aren’t enough quality youngsters to fill the void left by the “golden generation”, but they were rarely given the opportunity.

When Osieck was announced as Socceroos coach, Lowy rattled off a list of objectives he said the selection committee measured all prospective coaches against.

One of which being that “they must have demonstrated the capacity to rebuild teams and to work with young footballers and develop them into internationally competitive players”.

While the public is not privy about exactly what was written in Osieck’s contract, it is likely that giving game-time to younger players in preparation for 2014 and beyond was a KPI.

It was clear two years ago Osieck had no real intention of rejuvenating the squad, and the FFA quite frankly should have enforced change.

At no point did anybody from the FFA put pressure on the German to use some of the next generation of players, even in friendly matches.

Now they must come into question in regards to why it took them so long to take drastic action. The World Cup is only eight months away after all.

Ultimately, the blame must lie with Australian football’s governing body, as they are the ones who employed Osieck and did not enforce their own guidelines until it was too late.

The FFA’s next move is critical in the development of Australia’s footballing future – they have to get this right.

If they choose an overseas coach, he must be of the highest quality and not a D-grade journeymen of which the they’ve gone for the last two times.

All three would be more than competent, but would come at a price.

Locally, Ange Postecoglou and Graham Arnold are the standout choices after their championship-winning exploits in the A-League.

It would be a massive blow to the domestic competition should any of them leave their respective clubs, but the national team should be the priority for the FFA.

After working wonders with the Western Sydney Wanderers, Tony Popovic has been singled out as possible future Socceroos coach. There’s no doubting he will be at some point, but after only one season as first team manager it perhaps is a bit early.

Whoever the FFA decides on, the long-term future of the Socceroos must be at the forefront of their decision-making process.

Daniel Baricevic is the deputy sports editor of upstart and a third-year Bachelor of Journalism (Sport) student at La Trobe University. You can follow him on Twitter:@danielbara4