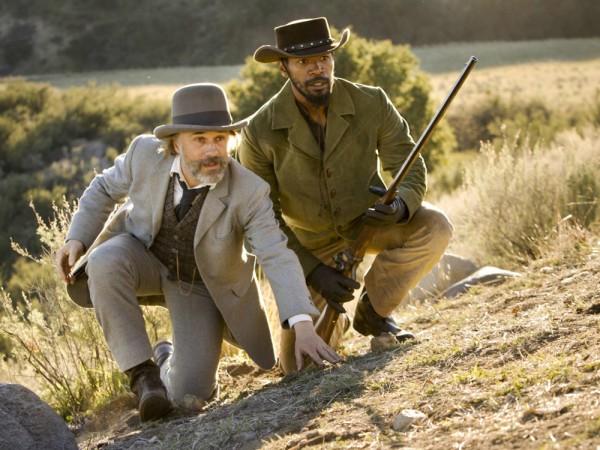 There’s a lot to like about Django Unchained. Written and directed by Quentin Tarantino, it differs from his previous works, and is arguably his most linear and least stylised flick in many years.

A few years before the American civil war, a black slave named Django (Jamie Foxx) is purchased and liberated by German bounty hunter and former dentist, Dr Schultz (Christoph Waltz). After learning the ways of the wild west and collecting bounties, Django attempts to buy back his wife from the cultured and egotistic southern landowner Calvin J. Candie (Leonardo DiCaprio). Foxx, Waltz and DiCaprio are well cast, and the three of them dominate the movie and every scene they’re in — Tarantino has a way of getting the best from his actors.

Joining them in the movie is Samuel L. Jackson, initially unrecognisable as the aged servant Stephen — until he opens his mouth. Also notable is Walton Goggins, a great actor with a genuine southern drawl who seems to crop up in a lot of western movies these days (which I encourage).

Tarantino has a habit of taking a genre and adding his own spin on it and Django Unchained carries some of his trademark tendencies — well written dramatic scenes with powerful monologues, which stretch on past the logical conclusion and once the tension is stretched past breaking point, punctuated with a large dose of violence and gore. The movie pulls jarringly from one extreme to the other. It’s a triumphant formula and one that he applies in every genre he approaches.

The movie very occasionally plays for laughs and when it does it comes with a shock factor attached. Even then every scene seeps with tension. The music is the only element that doesn’t entirely fit. Tarantino follows the Mel Brooks method of choosing music that doesn’t fit the genre, albeit without the comic effect.

Django Unchained is savage and unsympathetic to viewers — a slave is torn apart by wild dogs, Django’s wife is mercilessly whipped and humiliated for an extended scene, Django himself is almost castrated. Much of the horror is seen through the reaction of others, but the audience is spared nothing.

While the brutality of the treatment of he and his wife fuels Django’s need for revenge, the movie can seem excessively casual in its racism — something that very few directors can get away with. Tarantino, with his dedicated fanbase and proven track record of hits, is one of a few people who would ever attempt to make it. It’s an enjoyable movie to watch, but the more you think about it the less you like the aftertaste.