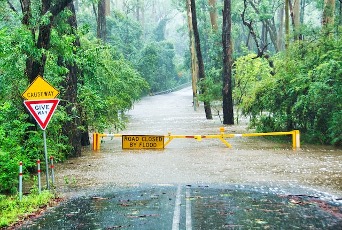 It’s a simple message. Not bound by law, but strongly worded, and for good reason.

Of the 339 drowning deaths recorded in Australia from July 2021 to June 2022, 43 of them were flood related, but only one was in Victoria. But since the adverse flooding in October, which saw major rivers reach peaks not seen for up to fifty years, two people have died in flood waters.

So, we do know a lot of the dangers in advance. We’re more connected than ever and lifesaving information and warnings can be only a click away. But it’s heeding those warnings that many seem to struggle with.

One of the biggest warnings people don’t seem to heed is to not drive into floodwaters. Year after year, the Victorian State Emergency Service (VICSES) responds to hundreds of distress calls from people stuck in their cars, in the grips of raging flood water.

According to the SES, is that it only takes 15cm of water for a car to float, and yet across the October 12 and 13, thirty people trapped in their cars in floodwaters had to be rescued, something that VICSES say is “not good enough”.

“The single biggest killer in flooding in Australia is people attempting to drive through flood waters,” VICSES Chief Officer Tim Wiebusch told the ABC that week.

With a fleet already stretched thin by the loss of a number of response vehicles due to cracks identified during routine testing, Wiebusch said that they have been troubled further by these kinds of rescues.

“And that just ties up our emergency services that could be supporting more vulnerable communities that are under pressure [from] these floods,” he said.

Not all flood deaths are a result of people driving into flood waters, but the consequence of having to perform those rescues are profound.

Another challenge is preparing people for flood events. This is particularly difficult because, unlike the routine nature of bushfire seasons, flooding is neither consistent nor routine.

Weather conditions that allow for these events are less reliant on temperature, and more on complex systems that can present themselves at any time of the year, with significant events occurring in June last year compared to October this year.

Floods are less common in Victoria than other parts of the country, but significant flooding in the past has occurred every 20 years or so, but experts are predicting a rise in the frequency of these events in the future.

Each of the previous flood events coincided with a La Nina event, and this year’s event followed that same trend, the third one in a row, according to Dr Shayne McGregor. An associate professor at Monash University, McGregor studies climate variability, and has been closely following the phases of El Nino and La Nina and their impacts on our environment.

As the globe warms up, the atmosphere will be able to hold more moisture, a situation he says is of significant concern for future flooding events.

“The strongest agreement that we have across the models is that the intensity of high rainfall events will increase,” he said.

“The mean rainfall may not change, but when you do have a large rainfall event, it’s likely to be larger.”

With rain events expected to become more extreme, learning from our mistakes is becoming increasingly important. However there’s another roadblock that is hampering flood response: warning fatigue. A result of over-warning without the danger eventuating, warning fatigue becomes a bigger problem as natural disasters increase in frequency.

Research from the Bushfire and Natural Hazards Cooperative Research Centre has shown that people become apathetic and tired of hearing warnings, and emergency services are continually troubled by the need to warn the public, but not wanting to desensitise them.

This fine line was tested to its limits in 2011. Following the 2009 Black Saturday fires, which caused 173 fatalities and thousands of homes to be lost across Victoria, confronting ads were aired to ensure residents would not become complacent and maintained alertness during fire season, and ensuring that residents had fire plans in place.

Despite the widespread impacts of recent events, no such attempts have been made to warn people of the dangers of floodwaters or prepare them for dangerous situations involving floods.

Ignoring warnings in any natural disaster situation can be deadly, but in floods, when only 20cm of water stand between you and safety, it’s especially important.

Underestimating the power of flowing flood water increases the load of work for Mr Wiebusch and VICSES and although it’s dangerous to perform these rescues, it’s not the biggest danger in these situations.

“Do not attempt to drive through floodwaters. It may be the last decision you make,” he told the ABC.

As for the future of flood events in Victoria, Dr McGregor offers a stern warning.

“I don’t think we’ve seen everything [La Nina] has to offer.”

Article | Josh Squire is a first-year sports media/journalism student in Media and Communications at La Trobe University. You can find him on Twitter @joshysquire

Photo |  yellow caution wet road sign on gray concrete road by Phillip Flores available HERE and used under a Creative Commons licence. The photo has not been modified.