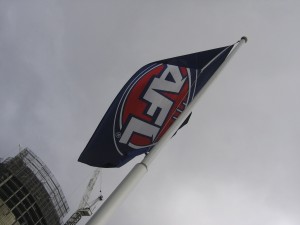 However, this year contract discussions will be given added spice with the AFL’s introduction of free agency on 1 October.

upstart has decided to map out the free agency system so football lovers can be up-to-date with all the rumours and innuendo as it unfolds throughout season 2012.

Under an agreement between the AFL and the Players’ Association, the free agency system will allow long-serving and delisted players a month-long window to move between clubs without having to rely on a trade or the draft.
The AFL’s system is a limited form of free agency where players are classed into categories. These categories determine the players’ right to move to a club of their choosing. Below is an outline of each category:

*A player who has played less than 8 seasons at his club and are out of contract:

Not a free agent
If the club wishes to retain the player, then he is not eligible for any form of free agency. In this circumstance there is no change to previous years, the only way a player can move to a new club is via a trade or by taking his chances in the draft.

*A player who has played less than 8 seasons at his club and has been delisted:

Unrestricted free agent
The difference in this situation is that they are no longer required by the club, qualifying them as an unrestricted free agent. The player has the right to choose the best offer from a rival club with no compensation awarded to his previous club.

*A player who has played more than 8 seasons at his club, salary is in the top 25% at the club and is out of contract for first time:

Restricted free agent
The player also has the right to choose the best offer from a rival club, however, he is restricted  because his current club can match the offer,  making the player unable to simply move to a new club. He must either remain at his current club, seek a trade, or enter the draft.

However, if the current club is unable to match the best offer, then the player is free to move to a rival club with a compensation pick awarded to his old club.

*A player who has played more than 8 seasons at his club, salary is not in the top 25% at the club and is out of contract for first time:

Unrestricted free agent
The player has the right to select the best offer put to him but under this category has the right to freely accept the offer, regardless if his current club is able to match it. The club would be compensated with a draft pick.

*A player who has played more than 10 seasons at his club:

Unrestricted free agent
Same situation as above where the player has the total right to accept the best offer put to him by a rival club. For a diagram explaining the AFL free agency system click here.

Benefits of Free Agency
Clubs who allow for enough room in their cap to match offers and tempt opposition players could prove the big winners.

The AFL made its free agency announcement in February of 2010, allowing ample time for all clubs to get their salary cap in order.

The Australian’s Greg Denham last week wrote that in a meeting between clubs and the AFL a well-respected former football manager shouted at AFL general manager of football operations Adrian Anderson, “If you bring free agency in, you will always be remembered as the man who f….ked footy.”It is fair to say AFL free agency has attracted its fair share of criticism. La Trobe University Vice Chancellor’s Fellow and former Collingwood coach Mick Malthouse voiced his disapproval last week on Adelaide radio station 5AA:

Once free agency comes in, we are doomed to a two-tiered competition(-), sides are never going to get out of the bottom five or six. -Mick Malthouse

While the bottom clubs may have the salary cap room, inferior facilities may dint their chances to lure a superstar.

Visit Collingwood’s Westpac centre followed by a trip to the Bulldogs Whitten oval shed. Which workplace would you rather be at? The AFL is set to release a complete list of players that will be eligible for free agency on 20 March 2012.

Keep updated with upstart on contract talks as they unfold.

What are your thoughts on the AFL’s free agency system? Let us know below.

William Botoulas is a third-year Bachelor of Journalism student at La Trobe and upstart’s football writer. You can follow him on Twitter: @botoulas43