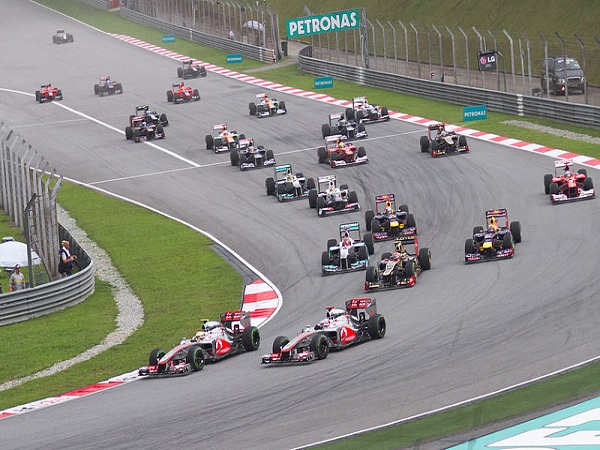 Kimi Raikkonen’s stunning opening round win in Melbourne has set the scene for yet another cracking season of the world’s penultimate motor-sport category, and the early chase for the title heats up in Malaysia this weekend – quite literally.

Extreme temperatures await drivers and teams in Kuala Lumpur, meaning this race really is a test of man and machine.

For the drivers, high in-car temperatures turn the 56-lap race into a tumultuous battle against not only the other drivers on the track, but the threat of dehydration.

However, as harsh as the conditions are for the drivers, it’s the engines and tyres that’ll be feeling the searing heat the most.

Sepang’s fast corners and abrasive tarmac mean the Pirelli tyres will take severe punishment for the duration of the race, and whilst graining was a problem in the cool conditions of Melbourne, thermal degradation will become a key factor over the weekend.

Renault Sport F1, whom supply many of the teams with engines, have already come out and stated that the heat mixed with humidity will reduce power output of their engines as the water displaces air and slows the combustion process.

Heat isn’t the only thing drivers and teams are worried about. Torrential rain has become a feature of the Malaysian Grand Prix, and with storms predicted for Sunday, it is quite possible we could see a similar race to 2012 where a monsoonal downpour suspended the race after just nine laps. After a near hour-long delay, Fernando Alonso took the win from an impressive Sergio Perez.

What can we expect from this weekend?

There is a general consensus that Malaysia is a much better indicator of the true competitiveness of each team than Melbourne, and that is especially true after the weather played havoc last week at Albert Park.

Although both Lotus and Kimi Raikkonen were extremely impressive in Melbourne, it was more smart tyre management than blistering pace that brought on the win and the jury is still out in terms of whether or not they have the raw speed to challenge for the title.

In saying that, the fast degrading Pirelli’s have forced teams to think more about tyre strategy. With the battering the rubber will be put through this weekend, only a fool would rule out both Raikkonen and his team mate Romain Grosjean for a race win.

Having enjoyed great success at this track, Ferrari’s Fernando Alonso will head into the race as one of the favourites. He holds Sepang’s qualifying lap record and with this year’s Ferrari looking a much better prospect than last, he will be looking for a win to go back-to-back in Malaysia.

Extreme conditions and a fast flowing circuit will mean that the Malaysian Grand Prix will be as unpredictable as ever and there is nothing to suggest that this weekend will be any different.

Daniel Baricevic is a third-year Bachelor of Journalism (Sport) student. You can follow him on Twitter: @danielbara4