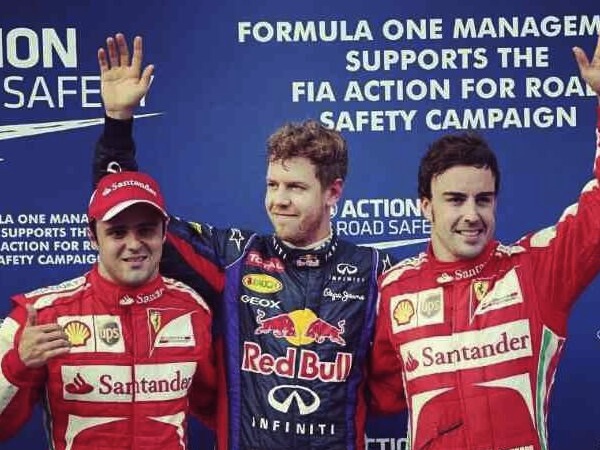 Despite Sebastian Vettel’s dominant victory in Bahrain last Sunday, which catapulted the young German to the top of the drivers’ standings, nearest rival Kimi Raikkonen has the F1 world talking with his early season form.

The Finn kick-started his campaign with a tactical masterclass in Melbourne, winning the Australian GP from seventh on the grid. Second-place finishes in China and Bahrain have seen Raikkonen move to within ten points of Vettel.

Raikkonen’s recent consistency has been particularly impressive. He has completed the last 32 races – 21 of those in a top ten position. With Fernando Alonso already suffering a second lap DNF in Malaysia and a disappointing eighth place in Bahrain – courtesy of a DRS failure – the onus is on the ‘Iceman’ to keep the number one Red Bull within touching distance.

It would not be fair to put one McLaren driver here without the other. Both Jenson Button and Sauber recruit Sergio Perez have struggled from the opening practice sessions in Australia to get any sort of competitive pace out of their cars.

It has been a stark contrast to the tail end of 2012, where McLaren claimed victories in Brazil and the United States and was undoubtedly the benchmark team. With minimal rule changes heading into 2013, it is somewhat of a mystery as to why their pace has disappeared. They have only managed to score a measly 23 points, leaving McLaren sixth in the constructors’ championship.

Adding to the team’s woes, a late scrap between the pair while jostling for a minor points finish in Bahrain has experienced campaigner Button furious at his younger teammate. Button later did his best to play the disagreement down, on Twitter.

Important chat yesterday with @SChecoPerez 2 clear the air. As a team we will move forward and live 2 fight another day 😉 roll on Barcelona

While the Woking based outfit has not suffered a start this poorly for a number of years, they will find comfort in the knowledge that their cars tend to perform at a higher level as the year progresses.

Lewis Hamilton seemed to be the only person in the world late last year that could rationalise his decision to switch from race winning McLaren to underachieving Mercedes. However, the criticism has only made the 28-year-old a more determined and complete driver, enjoying without doubt the best opening stint of any 2013 pre-season transfers.

In just four races, the Brit has managed to take part in the podium celebrations twice, finishing third in Malaysia and China. Hamilton’s podiums were separated by fifth placings in Australia and Bahrain, including a largely unexpected pole position in Shanghai for race three.

Having scored 50 points to date, Hamilton has overhauled seven-time world champion and predecessor Michael Schumacher’s entire 2012 total of 49 points. If Hamilton can maintain his current consistency heading into Europe, he may begin to challenge the front runners for the 2013 crown.

Zero points have been scored between the five rookies that have joined the Formula 1 ranks in 2013, but Jules Bianchi has been the clear standout. The highly praised Frenchman joined Marussia over the season break and has totally outclassed his teammate Max Chilton, qualifying and racing ahead of the Brit in each of the opening four races.

Bianchi’s best result thus far was an impressive 13th place finish at the chaotic Malaysian Grand Prix, bridging six positions in the race after qualifying 19th. The 23-year-old will be looking to further stamp his superiority over his fellow rookies throughout the remainder of the season, and surely pursue a more competitive drive in the future.

Mark Webber has been declared by many as the unluckiest man in Formula 1, and 2013 has further strengthen the theory. Once again the Australian has fallen victim to some terrible luck, only mustering 32 world championship points – less than half the tally of teammate Vettel.

After qualifying on the front row in Melbourne, a tyre pressure issue derailed his hopes of success on home soil as he struggled to get his Red Bull off the line. All elements appeared to be on track when he led the race in Malaysia, before a disobedient Vettel ignored team orders to swoop past Webber and relegate him to second.

In China, a fuelling issue meant Webber was disqualified from qualifying, and had to start the race from pit lane. Matters only got worse during the main event, as a loose wheel nut prevented him from finishing the race.

Webber never looked capable of matching Vettel’s Bahrain pace, but was heading towards a commendable fifth place finish before Hamilton and Perez made decisive moves on the final lap to demote him to seventh.

While he may not be a household name just yet, Western Australian Daniel Ricciardo has shown early season glimpses of why he must be a candidate to replace his older and more experienced Red Bull countryman.

Ricciardo qualified in seventh place in China and, unlike his performance in Bahrain twelve months ago, managed to hold his spot. Ricciardo produced a career best result and claimed six valuable world championship points for the often struggling Toro Rosso team. However, consistency has been hard to harness. Ricciardo’s other results have included 16th in Bahrain, as well as retirements in Australia and Malaysia.

There has not been a single safety car deployment in the opening four races, which have consisted of 227 laps.

Jake Michaels is a second year Bachelor of Journalism (Sport) student at La Trobe University. You can follow him on Twitter: @JMichaels193