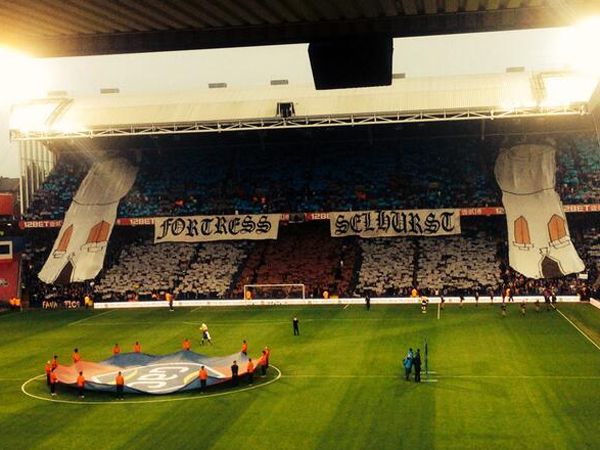 Selhurst Park is bouncing, producing an atmosphere as boisterous as any football ground in England throughout the season.

Except its hosts, Crystal Palace, trail Liverpool by three goals with just over 10 minutes to play. For Palace’s loyal supporters, the result is meaningless. Premier League survival has already been secured and their final home game of the season represents more of a celebration of the team’s revival, rather than any worthwhile opportunity for points.

But yet Damien Delaney pulls a goal back and, suddenly, the decibels rise another notch. Just seconds later and Dwight Gayle scores a second to reduce the margin once more. Then, with just two minutes remaining, Gayle is through again, arrowing a shot into the bottom corner.

It’s 3-3 and the impossible has, not for the first time in Crystal Palace’s remarkable season, been achieved.

After gaining promotion to the Premier League through a dramatic playoff series last season, Crystal Palace looked to be heading back to the Championship as quickly as they came up.

Nine losses in its first 10 matches didn’t help the Eagles shake the tag of being the football league’s ‘Yo-Yo Club’, bouncing back and forth between the first and second divisions.

A lengthy spell without a recognised first-team coach in the wake of Ian Holloway’s sacking didn’t help matters at Selhurst Park, either. But, after a month deliberating on candidates, former Stoke boss Tony Pulis would turn Crystal Palace’s fortunes around.

“It’s about a manager suiting a club and I believe the core abilities that the Palace squad had were far more receptive to the playing style that Tony Pulis wanted to achieve than predecessor Ian Holloway,” The South London Press’ Richard Cawley tells upstart.

“Pulis was a return to their roots. He massively tightened up the defence by making the side very difficult to break down. On top of that he just had that Premier League experience – he knew that being committed, regimented and breaking sharply on the counter was Palace’s best route to recover from what looked an irredeemable situation.”

A manager renowned for never being in charge of a relegated team throughout his 22 years in the business, the feel-good effect under Pulis started immediately, with the Eagles recording a 1-0 victory over West Ham on the day of the his appointment.

11 wins from 24 matches have since followed, including five straight victories throughout April, to guarantee Crystal Palace’s Premier League status.

It’s an achievement that never seemed realistic following the sacking of Holloway and the stumbling when searching for his replacement.

“Palace lacked direction and purpose prior to him arriving and I think he nailed down the mood in the dressing room and his knowledge of this level seeped confidence into the players,” Cawley says.

“The media were quick to jump on the time it took co-chairman Steve Parish to come to a conclusion.

“Eventually they went for their first choice at the start of the process. It might have taken a long time to sort out but the club will feel vindicated in the end, as Pulis has proved, undisputedly, to have been the correct call.”

Pulis’s pragmatic style has allowed Palace to extract the most from players such as Jason Puncheon and Yannick Bolasie on the flanks. Their impact on the team’s revival, as it was on Monday night against Liverpool, has proved instrumental.

But leading the charge is an Australian – Mile Jedinak. The Crystal Palace captain has enjoyed a fantastic maiden season in the Premier League, leading the entire competition for tackles and interceptions.

And while Puncheon and Bolasie might take the plaudits for their invigorating attacking play, according to Cawley it’s Jedinak who is the most vital cog in the Palace team.

“Mile has been the outstanding player at Palace over the past three seasons and, in fact, he is the one player that I think the club could not afford to lose to injury,” he says.

“Luckily he has been an ever-present. That in itself shows how vital he is.

“Others might have grabbed more headlines this season for contributions in games but he is the glue that holds the Palace side together.”

The other glue that kept Palace from crumbling has been the unwavering support from its loyal fans.

Like at Stoke, where Pulis had the intimidating Britannia Stadium crowd on his side, the manager has quickly been able to get the utmost backing from Palace’s diehard supporters.

“He didn’t need to do anything on this front,” Cawley says. “Palace already had the best support in the division.

“The supporters were delighted to finally be back and they were always going to stick with their team – even during the lean early months of the season.

“A lot of the noise is initially brought by a small section of fanatical fans in the Holmesdale End – it really has turned Selhurst Park into a cauldron, particularly as their form has improved.

“The support has been unbreakable.”

Luckily for those at Selhurst Park, they’ll have another season of Premier League football to enjoy come August.