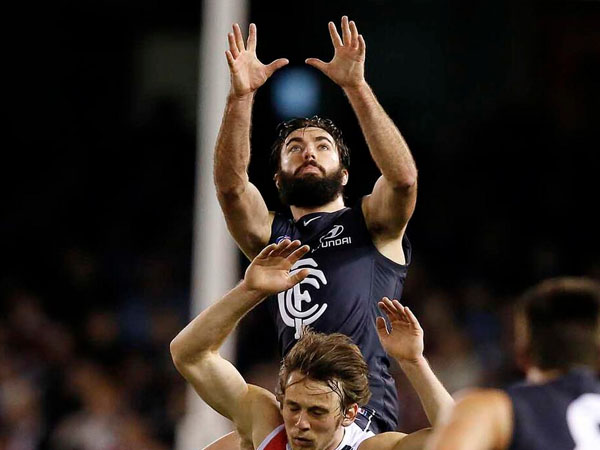 Taken pick 45 in the 2002 AFL draft, he took a few years to establish himself as a player before seeing the Carlton Football Club through the toughest period in its history, where between 2003 and 2008, the club won consecutive wooden spoons and failed to make the finals in each season.

Simpson leads by example, putting his body on the line week-in, week-out. With the slender frame not much bigger than the 67 kilograms he played his first game in, Simpson exemplifies you don’t need to be a big muscled brute to play the game at the elite level.

“The games so quick, it’s pretty uncontested and it’s all about skill and how you kick the footy,” the 29 year-old from Emerald says about the evolution of the game.

Simpson concedes his 2013 campaign didn’t get off to the greatest start.

“Obviously I wasn’t playing great footy at the start of the year,” he says during our chat.

But a move into defence was the perfect way to gradually kick his form into gear before he stormed home in the back half of the year to take out Carlton’s John Nicholls Medal.

“Mick (Malthouse) was pretty keen to add a bit of run to the backline to help me out and help the team out,” he says. “The more time I spent down there, the more confident I became.”

This is evident in Simpson’s performances, recording under 20 disposals just four times in the last 16 matches of the 2013 season.

Regularly seen running back into oncoming players with his trademark bravery, the unassuming Simpson admits while courage comes naturally on the footy field, it’s something he’s had issues with throughout their career.

“I think everyone’s had that situation where they’ve gone back and haven’t gone hard enough. I think you’d be lying if you said you haven’t,” he says.

But Simpson says instinct plays a big part in courage.

“You work on it and a lot of guys it comes naturally too as well,” he says. “Just look at the ball and just go for it. That’s the way I’ve been brought up by my dad and coaching through the juniors.”

“If the worst thing you’re going to cop (while running back) is a knock or something, you get over those things pretty quickly so I don’t stress about what’s around me.”

Fortunately for Simpson, he hasn’t sustained many serious injuries other than a few knocks and bruises. This fortune has stemmed from his junior days as he acknowledges it’s exactly this that got him from a kid playing with his mates at Emerald to the Blues’ doorstep more than a decade ago.

“A bit of luck I reckon, I got scouted by an eastern ranges scout and they got me down there to play a couple of games as a 17 year-old because they were struggling,” he says.

“I sort of got my foot in the door and thought ‘okay, here’s my chance, this could be a career’.”

He hasn’t looked back since.

This is despite a slow start where in his first three AFL matches, where Simpson failed to register a disposal and had to deal with a few of his teammates calling him ‘donuts’.

“I think in my second game, I played two minutes,” he says.

“It was definitely hard to break into the side and find form when you got the least amount of time on the ground… It was just normal back then.”

This may have been due to the way the game was played in the early 2000s, where contested footy reigned supreme and the heavy-set players ruled the competition.

Perhaps Simpson’s weight may have been a hindrance to his development in his early days – a theory he also subscribes too.

“Yeah maybe early on,” he explains. “When I first started out AFL was different, it was a lot more crash and bash and you had to be a big body.”

But 11 years on, Simpson has gained a few kilos with the help of arguably the best beard the AFL saw in 2013 – and there were a lot of them – though he admits the fuzzy chin took some getting used to.

Last look at the beard!! Few hours to go, still time to donate…. Link is on CFC website. #DSV pic.twitter.com/ftV0WgRtqj

“It (the beard) started out as a joke and then I ended up raising about 34 grand for charity so it ended up being a good thing,” he says. “Mick wasn’t a fan of it early when I wasn’t getting a kick.”

“There was a lot of media with all the Melbourne players (doing the same thing)… so I tried to lay it as low as possible.”

For someone who doesn’t enjoy the fishbowl scene of AFL in Melbourne, it was a bit of a problem to lay low with the extravagance of a year-long beard.

“Definitely with the beard, the profile picked up,” he says. “I definitely don’t like it (the media hype in Melbourne).”

“Players are scrutinised too much in my opinion but I can get away with doing the grocery shopping without getting hassled so it’s not too bad for me,” he says.

But Simpson doubts the beard will return anytime soon.

“I’ll probably just run a little one, I don’t think ill grow it to the extent of last year, that was a bit crazy.

And the nickname ‘donuts’?

“I think that got blown up a bit about me having the nickname. It’s thrown up every now and then as a joke but it didn’t really stick.”

From zero disposals in his first three matches to averaging 22 in 2013, Simpson has earned the right to see the back of that nickname.

Robert Beaton is a first-year Bachelor of Sports Journalism student at La Trobe University. You can follow him on Twitter: @BobbyBeaton16