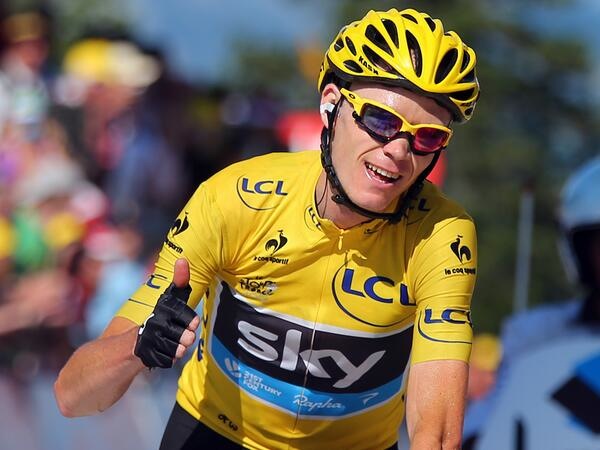 In the race’s first ever twilight finish, Froome negotiated the hectic final stage upon the Champs Elysees safely, to secure Team Sky and Great Britain their second GC win in as many years.

The final stage was won by Argos-Shimano’s Marcel Kittel, making it a fourth stage win for the German debutant.

Kittel outsprinted the experienced trio of Andre Greipel, Mark Cavendish and Peter Sagan to fully announce his arrival into the world sprinting ranks.

Cannondale’s Sagan could not be too disappointed, winning his second consecutive Green Jersey comfortably from Mark Cavendish.

However, the final week belonged to the true climbers, who had to negotiate 21 categorised climbs in order to maintain or increase their overall standings.

Movistar’s Rui Alberto Costa was the big winner from the final week, emerging from a 26 man breakaway group to take stage 16, before going solo on stage 19 to take his second victory of the tour.

The national race has been somewhat of a perennial disappointment for French riders struggling with the weight of expectation on their shoulders.

Up until the final week, the 2013 edition was no different, before Christophe Riblon chased down BMC’s Tejay van Garderen to take the fabled Alpe d’Huez stage.

The stage was memorable for a number of reasons, none more so than the unique stage profile, where the giant mountain was climbed twice by an exhausted field.

If any doubt remained that Chris Froome was to be atop the podium in Paris, it was expelled by a terrific and grueling performance by Richie Porte a few hundred metres behind the stage leaders.

The Australian led Froome up the mountain in pursuit of Quintana, before risking heavy penalties to ensure Froome survived the early stages of hypoglycemia, after failing to eat enough throughout the day.

Penalised just twenty seconds for an illegal feed and only one minute behind Quintana, Froome kept his challengers comfortably at bay to win his first Grand Tour.

The 23-year-old Quintana well and truly stamped his authority on his first French escapade – finishing second overall, winning the white jersey for best young rider and winning the King of the Mountains jersey after a famous stage 20 win.

The Columbian got the better of Alberto Contador, who tumbled to fourth overall after a difficult week in the Alps.

Joaquim Rodriguez was rewarded for his general consistency throughout the three weeks, securing third place on the road.

Cadel Evans- A really disappointing tour for the 2011 champion. The question will be asked whether or not Evans will have one more crack at the Tour or perhaps retire at the end of the season. The first Australian winner definitely paid for his strong performance in the Giro earlier this year, looking tired and unable to compete at his normally elite level. Evans was not helped by a weakened BMC who struggled with expectation following two top ten finishers last year. 39th Overall.

Richie Porte- If the Evans era of Australian Grand Tour Cycling has indeed ended at this Tour, then Richie Porte’s has well and truly started with a brilliant performance as Chris Froome’s right hand man. If not for one horrible day in the Pyrenees, Porte may well have been standing next to Froome on the podium – emulating Froome’s second in command role last year. The third strongest General Classification rider at Sky, with Bradley Wiggins injured for this year’s event; Porte will no doubt receive numerous offers at the conclusion of the season. Out of contract, the Tasmanian will be the number one target for Orica Green Edge, who has made no secret of their desire to have a General Classification contender. 19th Overall.

Michael Rodgers- The highest placed Australian, the 100th Tour de France has been somewhat of a renaissance for the one time General Classification contender. He played his role superbly in support of fourth placed Alberto Contador and, like Porte, paid for a couple of poor days which kept him out of the top ten. Rodgers looked at home in Team Saxo-Tinkoff colours and, injury permitting, is a possibility to back up for the Vuelta Espana in a month’s time. 16th Overall

Cameron Meyer- While a 130th place finish is nothing to write home about, one of Australia’s most exciting prospects showed glimpses of what he was capable of in stage 19. Finishing 9th on the stage, the former track champion showed that he may just have what it takes to move up in the road ranks. A strong couple of seasons led to his first start in the Tour this year, with larger roles expected of the 25-year-old in years to come. 130th Overall.

For Orica Green Edge and the other Australian’s in the race, it was a predictably tough last week; however, littered with small victories. Being one of the only teams to finish with all nine riders crossing the finish line has been lauded as a triumph for the fledgling team, as well as the obvious success of winning two stages early in the race.