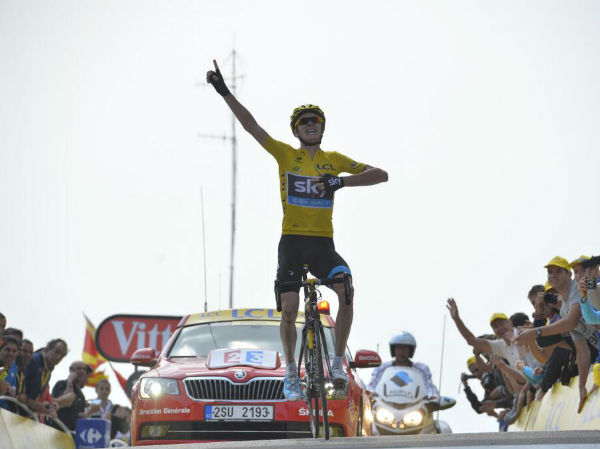 Chris Froome exploded on the slopes of the famous Mont Ventoux, all but securing his first Tour de France victory after stage 15.

The Kenyan born Englishman, put serious time into all his closest rivals in the tour’s journey south towards the Alps, in this 100th edition of the great race.

Having lost time to Alberto Contador and Bauke Mollema in the cross-winds of stage 12, Froome put any doubts over his form to bed, extending his lead to over four minutes clear from the rest of the field.

In tours gone by, a lead of four minutes and nine seconds would have been too much to ask of the chasing riders in the final few stages.

However the sheer quantity and enormity of some of the mountains still to ride, will give cause for optimism in the chasing pack.

There are no fewer than 21 categorised climbs still to ride, with five of those slopes deemed of the highest degree of difficulty.

If Froome becomes isolated early in stages 18, 19 or 20; the right attack from the right rider may just be able to take the yellow jersey from his back.

Froome’s role now is to consolidate his lead through to the individual time trial, putting more time into his rivals in his most favoured event.

The week started with team Argos-Shimano’s Marcel Kittel announcing himself on the world stage of sprinting, with a powerful display to outgun perennial stage-winner Mark Cavendish for the 2nd time this tour.

Not one for resting on his laurels, the German fulfilled his long touted potential by also taking stage 12 from the ‘Manx Missile’ Cavendish.

Cavendish made up for his disappointing, albeit luckless performances, by finding himself in the favourable group when cross winds separated many of the top contenders in stage 13.

Cavendish would make no mistakes this time around, easily accounting for Green Jersey holder Peter Sagan in the sprint finish.

The most notable casualty from the stage would be Alejandro Valverde, who could not recover from a flat tyre early on, to drop from second to well outside the top ten.

None of the top contenders would lose time in stage 14; before Froome’s devastating stage 15 wiped many of his rivals off the face of the slopes.

Again, Australian Richie Porte would prove his worth by setting a devastating speed early in the final climb, which allowed his Team Sky teammate to perhaps secure his first Grand Tour win.

Cadel Evans- Lost time again on stage 15, after a fairly positive week for our most likely General Classification contender. Has moved to 15:40 behind Froome and will now be looking to the end of the tour to regroup for the remaining races of the season. 16th Overall.

Richie Porte- Having a superb tour by any team’s standards, Porte has played a pivotal role for the second time this year, by pacing Froome away from his contenders in stage 15. Also had a magnificent individual time trial, placing fourth overall in a stage won by German specialist Tony Martin. 26th Overall.

Michael Rodgers- Our highest placed contender, Rogers has kept slogging it out for team Saxo-Tinkoff’s Alberto Contador, rarely leaving the two-time winner’s wheel.  As expected Rogers performed admirably on the time trial, finishing 20th in the discipline he won three times at the World Championships. Rogers will look to secure a top ten finish in his support role, while in the process attempting to move Contador closer to Froome. 12th Overall.

A much quieter week for the other Australian’s in the race, however all have done well to maintain their place, following an arduous fortnight of racing.

Mathew Goss’ form has improved slightly, having been in the mix in stage 10, however the Aussie may just be targeting the race’s final sprint on the Champs Elysees to take something from a disappointing performance.

Orica Green Edge has stayed out of trouble for the most part of the second week, with Italian Michael Albasini almost making it a third stage victory for the Australian owned team, placing second in stage 14.

Other Australian’s still fighting in the tour include:

What to expect next?

The final six stages of this perilously unforgiving tour will prove just as absorbing as the 15 that preceded it.

Stage 16 consists of three difficult and technically challenging climbs, before a stage 17 individual time trial will no doubt shape the final contenders.

The most famous mountain in the tour, Alpe d’Huez, is climbed twice in stage 18, while the final two mountain stages will provide more than a challenge for an ailing peloton.

With the course as physically demanding as it has ever been, expect many riders to perhaps fall outside the time limit in these final days, through sheer exhaustion.

Teams of the sprinters must ensure that their riders get safely to the end of the stages inside the time limit, if they want any chance of competing for the final stage win on Paris’s most famous boulevard.