In the biggest shock of the 2012 AFL finals series to date, a well-organised and ferocious Fremantle side got the early jump on Geelong and held its nerve late to record a famous elimination final victory. 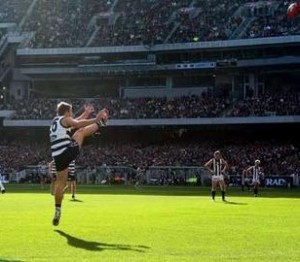 Dockers champion Matthew Pavlich kicked six goals and was the major catalyst for the 16-point triumph, Fremantle’s first ever finals win in Melbourne.

Cometh the hour, cometh the Pav.

The Purple Haze left the Cats red-faced, bundled out of its 2011 premiership defence at the first hurdle. It is only the second time in the past nine seasons that Geelong will not feature beyond the first week of September, a phenomenal record that truly illustrates the longevity of the Cats recent success.

The sequence most prominently features three premiership campaigns, earning Geelong its status as one of the greatest side’s ever assembled.

Cats are said to have nine lives and coincidentally, having experienced nine seasons predominately near the top of the mountain, Geelong are widely expected to finally fall from the heights.

Many people, such as journalist and Sunday Footy Show panelist Damian Barrett, have already declared last Saturday night as the demise of the dynasty – the final chapter in an era of blue and white hooped dominance.

Perhaps such predictions will be proven right.

But this brilliant football team has been written off before and if its past resilience is any indication, putting a line through the Cats name is naïve and potentially premature.

In the 2010 preliminary final, Geelong were dismantled by eventual premiers Collingwood. With incessant tackling and a powerful forward press, the Pies found the perfect formula to unlock Geelong’s handball-centric, corridor style.

Superstar Gary Ablett, who was arguably best afield with 40 possessions in the losing cause, announced days later that he had accepted a lucrative offer from the newly formed Gold Coast Suns.

Having lost its coach and most influential player, as well as experiencing the full force of a rival’s gameplan that made its own structures largely obsolete, it appeared that Geelong had been superseded – enter Chris Scott.

Somewhat of a surprise selection as coach at the time, Scott quickly proved to be an inspired choice.

He managed his senior players intelligently and tweaked Thompson’s existing gameplan to incorporate a greater focus on long kicking, an effective mechanism to break the widely implemented press.

Pinching several close matches early in the 2011 season – St Kilda, Fremantle and Collingwood as examples – Geelong slowly built momentum and by September, they were ready to explode. The 2011 premiership was Geelong’s ninth flag, and forced humble pie down numerous throats.

Fast-forward to round 16, 2012 and not for the first time, defeat at the hands of Collingwood had the wolves waiting at the kitty door.

The 31-point loss left Geelong with nine wins and six losses and given its tough fixture to complete the season, slipping out of the eight was widely anticipated. Even perennial Geelong optimist and media personality Billy Brownless admitted that missing the finals was foreseeable.

Six wins later, the Cats were purring and finished only one game and percentage off a top-four spot. Opinions unsurprisingly flipped, suggesting Geelong would be a dangerous member of the 2012 finals landscape.

The benefit of hindsight shows that wasn’t the case, but Geelong had once again changed perceptions.

Despite its early finals exit, the 2012 season could still be viewed as highly beneficial in maintaining Geelong’s high standards and its ability to challenge going forward.

Blooding 11 debutants and solidifying other second and third-year players at AFL level, Geelong are well placed to fill the roles vacated by impending retirements.

Playing alongside greats like Jimmy Bartel and Matthew Scarlett, the development and future prospects of Taylor Hunt, Jordan Murdoch and others are undoubtedly advanced.

There is further evidence to suggest Geelong still has the capacity to shoot for glory, and it all boils down to two commonly used words in football vernacular – strong culture.

An intangible and much desired commodity, the culture of a football club can be the difference between greatness and mediocrity – Richmond since 1980 is a reference point of the latter.

It’s no coincidence that teams like Geelong, Collingwood and Sydney have rarely missed the finals in the past decade. Amongst a variety of factors, all three have been able to identify and develop talent progressively without wavering on a finals standard of performance.

At the end of 2007, Collingwood lost Nathan Buckley, Paul Licuria and James Clement to retirement, but had ready-made options to fill the void – Scott Pendlebury, Dale Thomas and Nathan Brown. The Magpies haven’t missed the finals since 2005.

If Geelong can do the same, a continuation of regular September action is certainly achievable.

It will be extremely difficult for Geelong to win the premiership in 2013 on exposed form, but those who believe that they will slide indefinitely should tread with caution – the Cats still have claws.