It’s shimmered in America. It’s glistened in London. Now Egypt’s Golden Age has reached Melbourne in what is likely to be its final move before heading back to the land of the Pharaohs.

I’ve always been somewhat fascinated by Egypt. From the great pyramids of Giza to the mummification of their royals, that great desert land holds so much historical and cultural wonder. Tutankhamun and the Golden Age of the Pharaohs was therefore not an exhibition to be missed. But I’m not the only one keen on seeing treasures from King Tut’s era. According to the exhibition’s curator, advisor and academic content creator David P Silverman, it’s a topic that always penetrates within society.

‘I think that people learn a lot about Ancient Egypt first through the Bible where it’s referred to, and of course, everything there is pretty negative about Egypt,’ he says. ‘But still there’s this little bit of excitement.’

He mentions the amount of movies released since the 1930s that have depicted Egypt, including The Mummy (both the original and the remake), as well as video games.

‘There are all sorts of things that people know about Ancient Egypt, so I think that’s one of the reasons they’re so fascinated,’ he says. ‘Whatever part of the culture, there’s always something about Egypt.’

And there’s certainly something about this exciting exhibition which is sure to grab people’s attention. Displayed at Melbourne Museum, it opened to the public last Friday and showcases the life of King Tutankhamun, beginning with his ancestry and moving along through his birth, life, death — and of course, the afterlife.

‘This is a treasure that is probably the greatest archaeological treasure ever found,’ says Silverman. ‘It’s a one-time opportunity — unless you want to go to Egypt, which is not so easy for a lot of people.’

Upon entry into the exhibition, you are transported back to a period where hieroglyphics, lotus flowers and elaborate statues were of great significance; a time when nine-year-old boys rose to the throne to become kings. And although King Tut was believed to be just 19 when he died, his story is a remarkable one.

Born as Tutankhaten, he changed his name to Tutankhamun soon after his reign began. His heretic father, Amenhotep IV (also known as Akhenaten), introduced a new and monotheistic set of religious beliefs that the young king did not want to maintain. He was believed to have married his half-sister at the age of 12, with whom he did not have any surviving children — though two stillborn foetuses found in his tomb were confirmed to be his daughters. Tutankhamun died just nine years after becoming King, but the cause is still unknown. 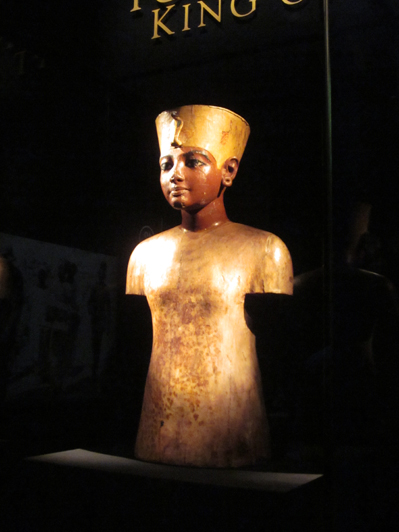 So why is Tutankhamun’s life such a revered one?

After his death in 1323BC he was buried in the Valley of the Kings, where his tomb remained untouched. In 1922, archaeologist Howard Carter made the discovery of a lifetime — a tomb that, to this day, remains the most intact.

The exhibition holds over 80 artefacts from temples and tombs of Tutankhamun’s ancestors, as well as an additional 50 from the tomb of the king himself. Sculptures, statues, gilded masks and funerary figurines known as ‘shabti’ greatly make up the collection — a collection of precious objects that have incredibly withstood the test of time for over 3,000 years. Having been moved around to different places across the world, Silverman says they must be transported very carefully.

Each room within the exhibition is individually characterised with dim, stylised lighting and soft Egyptian music that really sets the scene. Wall art illustrating life in the ancient era features throughout the gallery, resembling paintings likely to have embellished their tombs.

Walking through, you’ll notice the first few galleries are dedicated to the days before Tutankhamun — the pieces are extraordinary. Of particular interest (to me anyway) was the ‘Elaborately Decorated Chest’, a gift believed to have been given to Tutankhamun’s great grandparents (Yuya and Tjuya) and likely to have held jewellery or cosmetics. Then there is the huge gold coffin of Tjuya. Composed of gold, gesso, wood, calcite and glass, it is the biggest artefact in the entire exhibition

There are so many artefacts to observe and admire – including painted perfume bottles, leather dog collars and the beautifully carved chair of Princess Sitamun, King Tut’s aunt – but I was keen on entering the world of Tutankhamun himself. 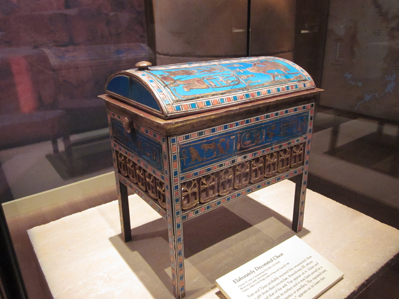 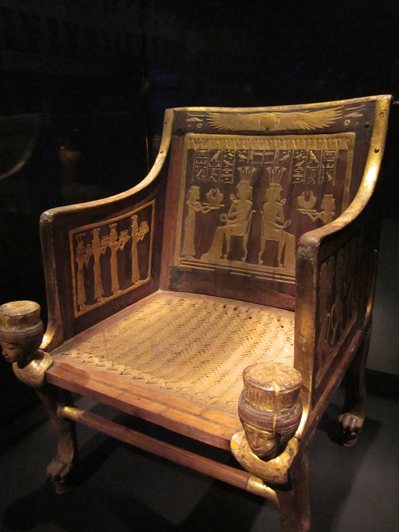 Chair of Princess Sitamun, made of wood, glass and silver

I wound my way along the galleries until I ended up in those dedicated solely to the boy king, again in awe of the fascinating objects that meant so much to the Egyptian people. In these exhibits you can see a headrest made from blue glass and gold, a wooden mirror case adorned in hieroglyphics, and a wooden chair with feet that resemble lions’ paws. It was also nice to see that the Ancient Egyptians made leisurely use of board games — one cabinet holds a small ivory and gold board, intricately painted, with a different game on each side.

What is most amazing is the amount of detail the Egyptians included in each of these artefacts, especially without the resources we have today. A ceremonial shield made with wood and gold portrays the king as a sphinx, each line and angle carved with such precision. Similarly, a golden shrine features a variety of scenes representing the king and queen. I couldn’t help but wonder how long it would have taken them to create. 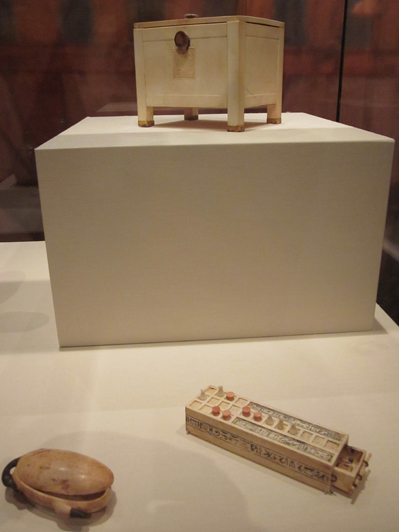 The board game, on the bottom right-hand corner, alongside a jewellery chest (top) and cosmetic container (left) 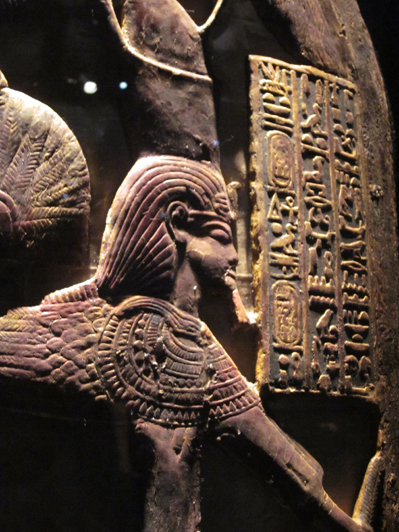 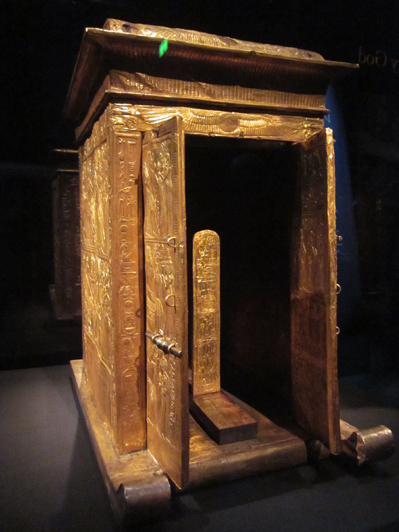 There are videos displaying Howard Carter’s discovery and plasma screens showing what King Tut’s coffin looked like, both on the inside and exterior. But the final gallery is by far the most interesting — the Burial Chamber, a smaller room showing the objects that remained with Tutankhamun’s body after death. They include a golden dagger and sheath, a diadem (the crown found on his head), and a glass and gold collar. A photo projection in the centre of the room shows where the items were found on his body. 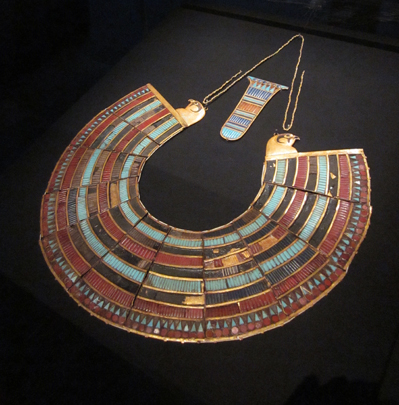 Royalty and nobility often wore these sorts of collars. This glass and gold collar was found draped across King Tutankhamun's thighs.

Studies are constantly being conducted in Egypt. Not only has Silverman made his own discovery – a cemetery of non-royal people – but he also says that examinations are still taking place with King Tut.

‘The Egyptian Antiquities Organisation now has an entire group of royal mummies that they’ll be doing DNA studies on,’ he says, ‘so we may find new relationships among mummies that we weren’t aware of before.’

Like in any museum, the exhibition wouldn’t be complete without the merchandise store at the end, where I couldn’t resist having my name printed out in hieroglyphics.

‘Strange animals, statues and gold – everywhere the glint of gold.’ Just like Howard Carter was astonished by what he found in Tutankhamun’s tomb, so too will visitors be by this remarkable exhibition. 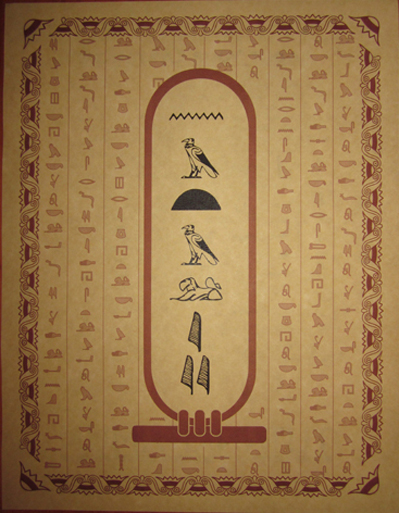 This is what my name looks like in hieroglyphics

Tutankhamun and the Golden Age of the Pharaohsis open Monday to Friday from 10am, and on Saturday and Sunday from 9am. The exhibition will remain at Melbourne Museum until 6 November 2011. Adult tickets cost $29.50, concession prices are from $26.50, and children pay $17.50. All proceeds go towards conservation of Egypt’s ancient treasures and the construction of Egypt’s new Grand Museum. For more information you can visit the exhibition’s website.