Last week marked the much-anticipated opening round of the AFL season, so I decided to widen my sporting knowledge by visiting the National Sports Museum.

The museum is located at Gate 3 of the Melbourne Cricket Ground; walking around the stadium, many people wouldn’t even notice it’s there, but once you take the escalator down to the gallery, you realise you’re in a whole new world. The lights are dimmed, the sounds surround you, wide-screen TVs roll video footage, and the enormity of the exhibition finally hits.

There are six galleries throughout the museum that you have the liberty of exploring, each with a separate focus: the MCG, the Olympic Games, the Sport Australia Hall of Fame, cricket, AFL, and temporary exhibitions.

It’s hard to know exactly which area to begin with — the place is massive. Luckily, I was provided with my personal tour guide; an audio player that took me through the galleries and gave me information at specific points along the way. Aside from historical information, the audio player contained many sound grabs from renowned athletes as well as atmospheric sound bites from sporting events.

It’s recommended that you give yourself at least two hours to explore the museum. I began at ‘The People’s Ground’ and found an incredible history of the MCG, spanning from its construction in the 19th century through to its present state. It was even used by Australian and American armies during the Second World War, a fact I never knew about our famous arena.

Even more impressive is the large model of the cricket ground, displayed proudly in the centre of the exhibit. Enhanced by overhead lighting, the model is complete with tiny cricket figurines and, of course, two sets of stumps at either end of the miniscule pitch.

From there I moved on to the ‘Faster, Higher, Stronger’ exhibit — a gallery dedicated to games of the Olympiad. I spent a lot of time admiring everything from the huge Olympic flag to the olive wreath awarded to our first Olympic medallist, Edwin Flack. The room houses memorabilia representing each year of the Olympic Games; medals, photos, mascots, identification passes and even a trowel used by athlete Shirley Strickland to secure her starting blocks.

The gallery also features shoes worn by runners Cathy Freeman and Steve Moneghetti, a cabinet of Olympic torches accentuating the differences in design over time, and a display with none other than Grant Hackett’s Speedos. Most interestingly, I learnt that the Ancient Greeks would eat rams’ testicles to increase testosterone levels, a performance-enhancing activity that doesn’t sound too appetising. 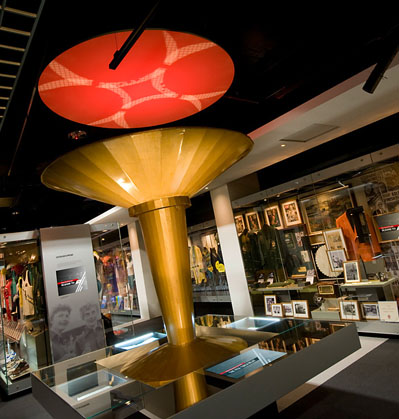 Wandering along, I gazed at the many windows dedicated to rugby, basketball, tennis and boxing until I reached the AFL gallery — ‘Australia’s Game’. Here I was greeted with walls of premiership posters dating back to 1992, lists showing recipients of the Charles Brownlow, Norm Smith and John Coleman medals, and original documents outlining the rules of the game. Did you know that the distance between the two goal posts was once decided on by the captains of each team before a game?

My interest then moved to a cabinet showing the change in uniform over the years. Today’s jersey and shorts clearly give our footballers a much sleeker style (in my opinion, anyway) than the initial knickerbockers and jumpers endured by players.

As I perused the galleries, the melodic voices of a group of school kids singing the Tigers’ theme song filled the room; undeniably, it is the most upbeat song in the AFL, but as a Carlton girl myself, I was hoping it wasn’t an omen for our match later that night.

The greatest part of the AFL gallery is unquestionably the ‘Off the Bench’ exhibit, a short presentation featuring James Hird — well, the holographic version, anyway. It’s difficult not to admire the technology that makes it seem so real. Incredibly, Hird’s speech had to be shot in one take in order for the technology to work, but you forget all about that as you listen to his passionate take on football.

Similarly, ‘Backyard to Baggy Green’ (the cricket gallery) features a hologram of spin-king Shane Warne. It adds to an exhibition flooded with cricket memorabilia, including a headband worn by former bowler Dennis Lillee, Sir Donald Bradman’s baggy green cap, and a life-size bronze sculpture of the latter champion.

The National Sports Museum also has a racing exhibit, equipped with an articulated skeleton of Carbine the racehorse, the 1890 Melbourne Cup winner.

At the end of the exhibition you notice a sudden change of atmosphere as you enter the MCC Museum; devoid of noise and with a slightly more placid feel, the museum presents the life of the Melbourne Cricket Club as it grew from simply that – a cricket club – to a full-blown entertainment complex.

All the galleries are a fantastic representation of the world’s greatest sports, but there was one gallery that was by far my favourite: ‘Game On’, the Interactives gallery where you can verse the technology and have a kick of the football, score a soccer goal or shoot some netball hoops. Needless to say, my skills weren’t great in any of the above, but I did manage to score a bullseye in archery and run a couple of cricketers out. 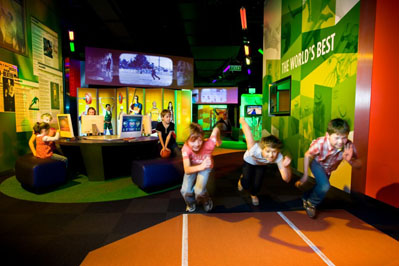 Game On. Image supplied by the Melbourne Cricket Club.

If you prefer to sit on the sidelines, you can put your reporting skills to use and put your name on the front page of the Herald Sun — just make sure you choose the winning team and scores wisely!

The National Sports Museum is open daily from 10am to 5pm at the MCG, Yarra Park, Jolimont. Admission costs $15 for an adult, $11 for concession and $8 for a child. Family and group passes are also available. For more details or information on upcoming events, you can visit their website.

If you’re keen on your sports, don’t forget to check out upstart’s sport section.