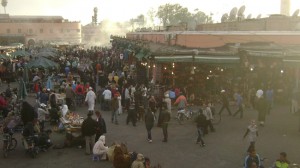 ‘This is as far as I can take you,’ he said, the tassels hanging from his crooked rear-view mirror swinging menacingly. ‘What do you mean?’ I asked; first time setting foot in Africa, 11pm, no French or Arabic to speak of other than your average ‘merci’ and ‘habib’.

As I wandered the streets of Marrakech, 18 kilogram backpack in tow, I cursed whatever (now long-gone) courage led me to tackle this alien city alone, and prayed to a God I don’t believe in that providence would get me safely where I needed to go since, apparently, the taxi driver couldn’t. ‘Never trust anyone whose pants match their shoes, their shirt and their fez,’ I thought, but in Marrakech, I soon found out, that would leave very few to trust.

I had spent four months backpacking Europe, making friends along the way, and thought all cities were equally combatable, but Marrakesh was something I hadn’t banked on. I’d travelled alone, I’d been to exotic and impoverished countries, but there was something about the souks and bazaars of Morocco that made one feel, well, overwhelmed.

I was seriously questioning my desire to travel alone, when one day while overlooking Djemaa El-Fna (the main market square), I realised what I loved about it.

I’d had my hand in both, travelled in a group large and small, travelled in a threesome, travelled in a pair. Aside from the unlikelihood of finding people who want to go to the same countries, cities, hostels, monuments, cafes, and/or paintings at the same time as you for the same amount of time and with a temperament not too disparate from your own, travelling accompanied is somewhat like being on anti-depressants. The lows aren’t as low (being lost is not so stressful, being followed home by drunk Athenians is funny, and needing to go to the toilet when you’ve just picked your luggage off of the carousel is no inconvenience) but the highs are also not quite so high. 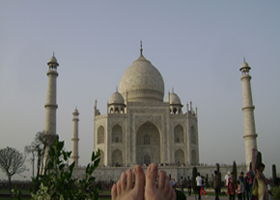 Leaning over the railing, pint in hand, screaming ‘Don’t worry, be happy’ with a couple of Germans, making the charismatic Dublin guitarist laugh; gave a feeling that this is what life is about, that no high could ever be this high, especially not with people I’d known for years, conversations with whom had been exhausted, arguments from the day before still raw.

While travelling with pals is fun, it’s rarely an adventure, everything new is not so shiny-and, and it still sits snugly in your comfort zone, perhaps with a blanky and a pack of arrowroot biscuits. The triumphs of solo travel, while seemingly small, are things that will stay with you, and do you service, forever.

The route to the hostel that seemed so lengthy, treacherous, and unknown fills you with a confidence that if you can arrive in a city you’ve never seen, a culture you’ve never experienced, a language you’ve never heard; and find your way, then you can do anything. Your parents haven’t done it, and probably couldn’t, and your friends haven’t had the guts.

The making of a new friend in the hostel that sat eating his/her breakfast while you wondered if he/she 1) spoke English 2) wanted a friend, and 3) wasn’t mental, fills you with the belief that you can approach anyone and never again will you be nervous or awkward in social situations. You can’t wait to get home and show everyone how much you’ve changed, matured, come out of your shell.

The successful excursion into the wilderness that led to the best ice-cream you’ve ever tasted, the scariest bus ride you’ve ever been on, the closest you’ve come to crying during a play, and the only time you’ve actually cried while looking at a structure made of metal reminds you that you are capable of many things you wouldn’t have thought you could do while sitting at home watching Getaway.

All of the travels-with-friends experiences have been, don’t get me wrong, fantastic, but also somehow safer and more standardised. That knot in your stomach is nowhere to be seen and that ‘no-one else has ever had the experiences I’ve had’ cannot exist.

The solo journey is becoming more popular according to ebookers.com and solotravel.org; which, they say, may be due to the GFC and the inability to find a suitable travel partner. However globalisation and the convenience of feedback-driven sites such as Trip Advisor, and interactive accommodation booking sites such as HostelWorld and HostelBookers mean the world is no longer as big and scary as it once was. 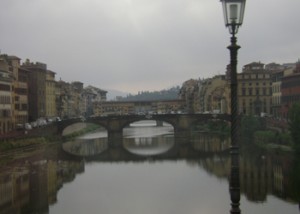 Such forums make the unknown seem a little less scary, and ensure that others have too travelled the road less travelled, and you shan’t be entirely alone.

If you’re considering solo travel, or want to see the world and none of your friends can get time off work/family/ commitments/their arse, I’ve compiled some advice from a seasoned solo traveler.

..Forget to write down the address/directions/phone number to your accommodation. Being homeless isn’t all it’s cracked up to be.

..Be too nervous to say ‘do you mind if I join you for a drink?’ what’s the worst that could happen? They say no? You’re NEVER going to see them again.

..Be afraid to spend your money on day trips, bus excursions and other touristy stuff to that effect, it’s often really worth it. Use the money you’ve saved not buying a souvenir from every place you go to.

..Take pictures of absolutely every building you see. With every picture think about what it will remind you of, and what story you will have to tell about it. If the story is ‘That’s in Vienna’, then delete it.

..Leave your map behind and just wander around aimlessly, you tend to find way cooler stuff that way.

..Keep a diary. Even if your writing skills possess not the wit and eloquence of my own, simple points of where you’ve been, what you’ve done and how it was will suffice, and write down those little moments that thrilled you.

..The Sound of Music tour in Salzburg and sing ‘I am sixteen going on seventeen’ at the top of your lungs with the 66 year-old American lady beside you.

..Get into lengthy conversations with other solo travellers that you’ll never forget; i.e. ‘Dance if that’s what you want to do with your life!’, ‘I’m actually in love with my best friend’, ‘I once did a poo in my pants during aeroplane turbulence’*

..Be nervous, afraid, scared of what the next city holds in store, you’ll never forget that feeling!

*The orators of these quotes shall remain anonymous.

Alexandra Hansen is a Monash University Journalism Graduate and global adventurer. Follow her on Twitter @allyhan6, check out her travel blog at backpacksandsewingmachines.blogspot.com.au.